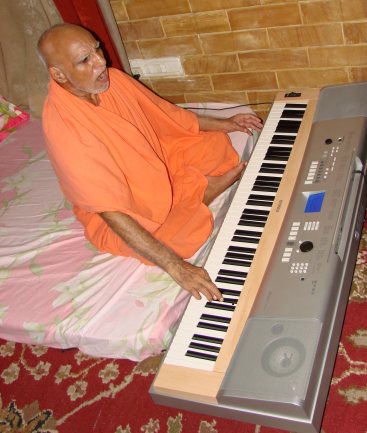 16th November, Malke Ashram: This was what Maharaj Ji had said during the course of the just concluded meditation retreat. So, to truly come face to face with the Almighty One, it is important to strive to enter deep, very deep within. The recently concluded period of three days formed an ideal base to carry the momentum gained, further inwards; rather than coming out into the world and allowing the mind to regain its old tendencies. With an eye to this end, few participants of the meditation retreat (Maharaj Ji himself, Sadhvi Yoganjali, Br. Guru Chaitanya, Br. Dhruva, Harpreet and Reena – all regular inmates of the ashram; besides, Smt. Sneh Suri from Delhi, Smt. Surekha Sahu from Lucknow, Shri Pratap from Village Malke -the householders who decided to keep their worldly duties at bay to utilize this golden opportunity) are currently locked in various cells, where they are devoting all their time to deep, solitude practice (though one would hardly term it a retreat in case of Maharaj Ji, who is perennially locked-in; this would be rather a going-back to his normal routine after his three day engagements in the just concluded meditation camp) .

The participants in this retreat enter with particular instructions from Maharaj Ji as to what to focus upon when they would be locked-in. Needless to say that the main sustenance would be derived from the wine of Hari’s name, and deep, powerful breaths (kriya yoga, in short –which form the backbone of practice). However, the Brahmacharis were also given additional instructions to focus also on asanas and other intensive kriyas, and for this reason they were deliberately asked to take some definite external nourishment in form of liquids. This was particularly important in the case of the Br. Guru Chaitanya, who has a penchant for severe austerities (he has just returned to the ashram after spending many months in the Himalayas, doing rigorous solitary practices) and had perhaps, even here desired to go on a bare minimum external sustenance; but against which he was advised by Maharaj Ji himself, since Brahamachari Ji is also supposed to be engaged in intensive external kriyas in addition to the more subtle kriyas of meditation etc. through the course of this retreat. The period of this retreat varies in case of various practitioners from three days to a week; though who knows how far it may extend in the case of a very fortunate, ‘drunken’ soul.