Reminder of Nirvana through the Life of Shri Kali Kambli Wale 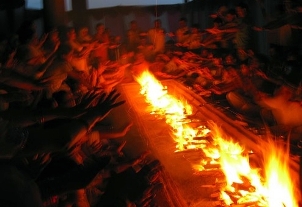 25-26th August, Kila Raipur: Maharaj Ji arrived back to India from his annual visit to Canada at the eve of Nirvanotsav of Shri Kali Kambli Wale. The atmosphere at Kila Raipur was as usual charged up with the spiritual fuel which makes the Divine spark latent within man to magnify into a blazing fire. Central to this was the practices of Agni Kriya that was carried with great focus and intensity. Besides, the spell-binding message that Maharaj Ji gave inspired everyone to a degree that they concurred if there was something worth pursuing in life, it was the great knowledge of one’s own Nature – wherein lies all satisfaction, the answer to man’s innumerable diverse cravings.

Prior to that Sadhviji Yoganjali Chaitanya spoke from the standpoint of Bhakti, and said that to merge into God, one will have to become like God, for only when the drop becomes the ocean, does into truly merges into the ocean. The distinctions vanish. Swami Suryendu Puri Ji followed up with the most pertinent point (but often missed) of practicing disciples and yoga under the direct command and instructions of the master. His message epitomized Guru Nanak Dev Ji’s focal message – Hukum rajayee chalnaa, Nanak likhyaa naal. Even if one is to practice disciples, they have to practiced in the spirit that the Guru tells, and not out of one’s own mental inclinations. In this spirit the discipline becomes a means of purifying the knots of the mind, otherwise it only leads of further groping in denser dark. 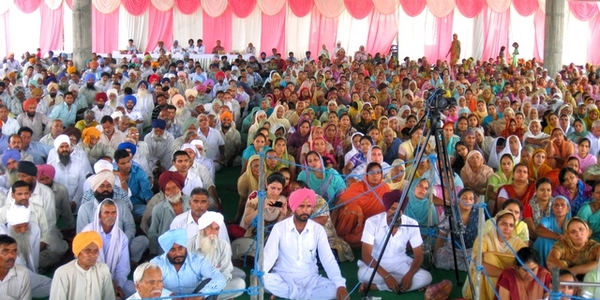 Devotees lost in the immensity of the Divine Current