Sept. 7-9, Harisar Ashram, Kila Raipur: On the occasion of 71st Maha-Nirvana Diwas of Shri Kambli Wale Maharaj Ji, Agni Kriya sessions and Satsanga were held at Kila Raipur Ashram. On the day of Barsi on Sept. 9, both Swamiji and Sadhviji spoke about his sadhana-tradition and also showed the way how each one of us can take a deeper plunge into the same.
You can hear the complete discourses following the links given on this page. 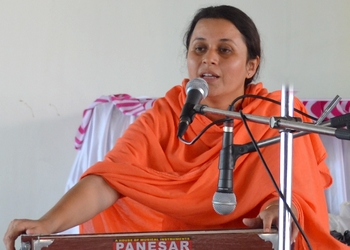 In this discourse, Sadhviji draws upon heart-touching verses from Gurbani and Sant-bani to emphatically carry her message across. She begins with offering the petals of her reverence to the memory of Shri Kambli Wale, especially the extraordinary example of tapas that his life brings to us, in which he meditated for seven years under one tree, oblivious to such basic needs as hunger, heat, cold, sleep etc. Such kind of practice is extremely rare, if not totally unheard of, in contemporary times.
Sadhviji makes an interesting point that we usually celebrate the deaths of saints more than their births. There is a profound reason for this. It is the death of saints that truly reveals who they are, and also gives us a glimpse of the beyond, which helps us to determine our goal for life as well. Their Maha-Nirvana clearly states that Nirvana is our goal too. She quotes from Kabir-vani: Jis marne te jagg dare, mere mann ananada; marne hi te paiye puran parmananda (Death, which terrifies the whole world, fills me with bliss, for it is through death that one attains total benediction or bliss.)
From here Sadhviji’s discourse revises for us the perennial principles of the sadhana-path:

Towards the end, Sadhviji has a surprise news to give to the audience, hearing which everyone is left joyous. It is about Maharaj Ji’s physical presence at Mallke Ashram and a possibility of him re-appearing on Dusshera, after one year. As we know now, that possibility did turn out to be a reality. 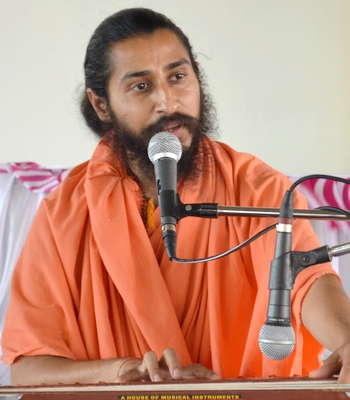 Before Swamiji begins, he informs that on the discourse-menu today there is going to be a mixture of dishes.

In this discourse, Swamiji begins with expressing the “bhava” of love that is present in bhaktas like Mira and Chaitanya, and says if such tears, as theirs, can deck our face, then what else is needed! With great passion, he urges the listeners to wake up now, for it has been so long since we have wandered in this worldly wilderness. He invokes the Guru as a mother, and takes the audience along on this journey of love and pangs of separation.

He shifts the topic a little to then talk about Guru Agya, citing an incident from the lives of Swami Rampuri Ji, Swami Dayalu Puri Ji and Shri Kambli Wale. The essential point to understand is that as long as we ourselves are not travelling on the Guru’s path, we cannot truly understand the Guru’s command. As long there are other objects in our vision, we will miss the true import of Guru’s hukum. At this juncture, Swamiji quotes a brilliant incident from the life of Swami Rama Teerth, where that marvellous saint disciplined his mind when it had forgotten the Guru to think about an apple – though it has been just for a moment. He had then hung the apple and seen it wither day by day – to teach the mind about the transitory nature of all things, and the perennial significance of the guru. It was because Duryodhana could not see the true Krishna, he opted for Krishna’s army instead of Krishna Himself, before the war; similarly, we too will fail to see the true import of Guru if we have our hopes placed elsewhere, like Duryodhana.

He shifts topic one more time to tell what tradition or parampara truly means. Citing incidents from the lives of Shri Kambli Wale and Swami Dayalu Puri Ji, Swamiji asserts that the current tradition has always placed Naam at the zenith, and if any outer activity like bhandaaras etc. have ever grown to the extent that they started to interfere with that central core of giving priority to Naam-sadana, they have been cut asunder by the Masters. Parampara is that which unites us to the param-para (the supremely Beyond – the Divine).

Thereafter, Swamiji adds the flavour of faith to the discourse. And says that only a true aspirant will seek a true guru. Those interested in money and wealth will attach themselves to places with big ashrams. Those who themselves harbour desires for name-fame will seek popular gurus. We seek what we are!

The final ingredient to the dish is talk about what Nirvana means. Here Swamiji re-asserts the eternal path that lies within the body; the turning of prana-mind upon it and resting beyond the tenth door. Then alone is Nirvana possible.

He urges the listeners to remain upbeat about their practice and the path.

As a last parting advice, he says that shastras have said to feed the hungry and not to feed the poor. Think about it. There is a difference between the two!