An Eventful Day at Ailsa Craig

12 June, Ailsa Craig. It was a day full of events. Melissa Jones invited many aspirants at OSO Yog Center to learnt about Agni Kriya & Surya Kriya. This was the third visit to the center and there were few who had already done the surya kriya and agni kriya earlier to. Still there were some new comers too. Therefrom they all moved to Anil Nakhwal’s place to gain the direct experience of these Kriyas.

Sun was shining bright so it was decided to make the sun meditation first. Considering the fact there were more of non-hindi speaking people only Shakti Mantra (Hram Hrim Hrum Sah Suryay Namah) was used. Still they all felt a great awakening and flow of energy. This helped everyone in going deep inside. 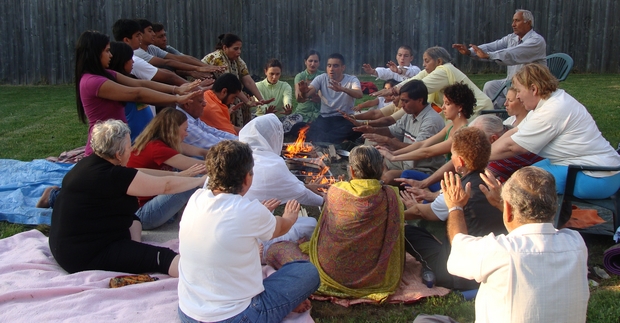 Later fire meditation was arranged. Even though the weather was not very favorable due to wind still they all practiced with devotion and enjoyed the session. Meeting the fire regulation in the country small containers were used instead of making a single huge fire-pit as in India.

To add to their fortune Maharaj Ji also interacted with them afterwards. Though it was supposed to be a light introduction but soon the discussion became intense when Katerina from Downtown Holistic Yoga Center, London started inquiring about the death and the samadhi. Maharaj Ji spoke in great detail and in very simple language so that everyone could easily follow it. There were some very interesting question-answers wchich we must share with you too: 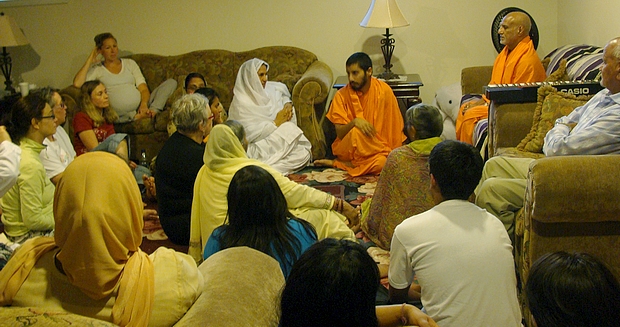 A gentleman asked Maharaj Ji if a Guru can help by reducing the negative consequences of someone’s old samskaras… Maharaj ji replied, “If there is a storm he cannot stop that or say he wouldn’t stop that but he could and would definitely provide his devotee with a shelter.” Then another guy asked, ‘The way you suggest that in a higher stage of spirituality one can conquer hunger, So is there a stage when one could conquer slumber/sleep also… Maharaj Ji said, “yes, he remains awake even while asleep.” Then someone asked about the miracles, if he could perform them and Maharaj Ji said, “Well, once you are connected to the divine you could indeed perform various miracles but then you have to divert your focus from Him and willingly get involved into the act but without an urgent need of someone’s wellfare, an enlightened soul would never do that.” Another question was asked if He could communicate with others at subtle plains and the answer was somewhat similar, “Well, why would he ever focus on any worldly object as such and divert from cotemplating upon the almighty which is but the ultimate goal. There could be a possibility that someoner closely attached to him remembers him out of some urgent need and he communicates back to offer some help but otherwise he would not intend to inquire about the happenings around and anywhere outside but deep inside his body and mind and soul.”