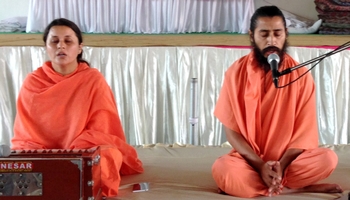 Sept. 17, Harisar Ashram, Kila Raipur: Swamiji’s message on Assu Sankranti is about the principle – “Main Nahin, Tu Hi Tu” (Not me, You and only You) – the epitome of the spiritual path; devoid of which we are nobodies on the inner-path, though we may have made a mark for ourselves in books of history. (Listen to Audio or Download right click & save as)

Swamiji illustrates this principle of guru-sharnaagati (surrender to the guru) by comparing in length the cases of two of Ramakrishna’s disciples: Hriday and Naren (Swami Vivekananda). Where the former, though having served Shri Ramakrishna for a greater length of time than the latter, ultimately deludes himself because his actions of “service” emanate from a sense of “I” and “mine” – for he served Ramakrishna Shri as an uncle, and thus out of attachment. Naren, on the other hand had no such chains upon him, and even little company of the sage was sufficient to manifest the grandeur dormant inside him.

Swamiji, asked all to advance on the path. Why should we remain seated in the same class, throughout our lives – which sadly is the case, when people say that they have been practicing for one hour, without missing a day; which really amounts to saying that I have been studying diligently the same books, in the same class, for years. To be Hriday or Naren? The choice is ours to make.