Baisakhi – What it means to be a disciple 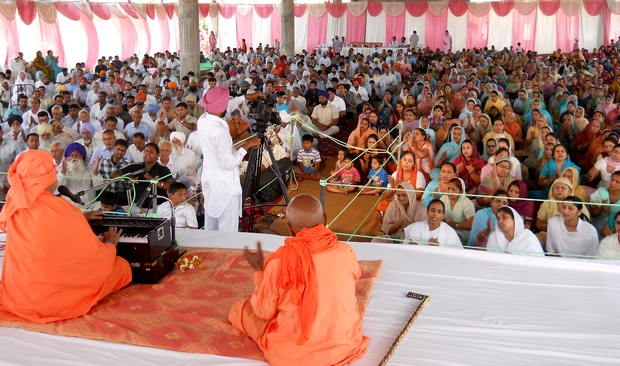 13 April, Kila Raipur. Baisakhi was celebrated at Kila Raipur with great enthusiasm as every year and hundreds of people from places near and far, reached Harisar Ashram to pay their reverence to Swami Dev Puri Ji who is affectionately called as Prabhu Kambli Wale (because he used to wear just a piece of coverlet called Kambli in Punjabi). After melodious Shabad-Keertan (devotional songs) Swami Buddh Puri Ji Maharaj shared the importance of this day celebrated in remembrance of Kambli Wale with all the devotees and inspired them to follow the teachings and practices taught by him.

It was this occasion when Swami Dev Puri Ji assumed his physical body in the village Sayan near Kila Raipur. His spiritual aspiration was not an ordinary one and hence he was credited admittance to a lineage of Mahayogis. This lineage was then represented by Swami Mewa Puri Ji who was such an accomplished yogi that he had conquered the death by consciously entering into deep Samadhi inside the Holy Ganges. This was attested in a few days when he reappeared before his disciples to discharge them from remorse of not carrying out a promise made for his departure.

This lineage has seen many accomplished yogis in earlier period such as Swami Amar Puri, Swami Raj Puri, Swami Tota Puri (who initiated Shree Ramkrishna Paramhams into Samadhi) and many more. We may trace it further back to Adi Shankaracharya, Gaudpadacharya, Shukdev, Vashisht, Brahma and finally to the Divine himself. Essentially all the traditions and lineages have their origin in the Divine but in the whirl of time most of them have lost their true nature. Though at times some enlightened souls emerge to revive those traditions with divine grace. It is a matter to our delight and satisfaction that this lineage is perpetually maintaining its core spiritual values of austerity and altruism. And it is not just the names we have mentioned earlier but the referred bodies which were the true carrier of the divine love and light. Since all the participating saints have put their utmost efforts to maintain and develop the divine current, this lineage is still sparkling with the crown of sewa (selfless service), tapa (austerity), bhakti (devotion), gnana (knowledge), and yoga. Though the bodies of those saints have disappeared with time but the divine flow has only grown with every next carrier. But it is not just a matter of pride but as a part of this lineage we have greater responsibility to carry out. And to appreciate our responsibility first we will have to recognize our tradition and its values quite lucidly.

We need to understand that The Divine Light is all-pervading but in general it is in latent form. Its only in the hearts of accomplished saints that this Divine Light is manifested to a great degree. Therefore teachings and life of such saints provide us with the guidance on living a purposeful life. If we praise the attainments and teachings of those saints and boast of being related to their lineage but fail to put their teachings into practice then our discipleship becomes unconvinced. If we don’t follow them then it means we haven’t understood them, we have not developed any relation with them. And if we express our incapability to follow them because they were great souls and we are merely ordinary beings trapped in worldly hustle-bustle, this notion is mere portrayal of our ignorance and foolhardiness. The first and foremost thing they have taught us is that we are essentially divine and the purpose of our life is to reveal this true nature of ours. If were to think of ourselves as a powerless lowlife then we would truly commit the greatest sin.

If we cannot follow their path then why do we claim to be their disciple? Did our enlightened masters empower us with the Guru-Mantra so that we get back to our families with unchanged assertions and aspirations; with same grievances and gluttony? Did they bless us with such a precious tool (guru-mantra) so that we defy the values of scriptures and act selfishly, that too in their name? All they have taught us is that we all are essentially divine and we have been given this human form to attain this highest truth. That is not only our prime duty but also the only purpose of life and if we choose not to follow for the sake of petty worldly excuses then we actually defy our life itself. By calling ourselves incapable of spiritual responsibility we disregard not only our inherent divinity but the divine himself and also the Guru who is sole resort to help us manifest this latent power. Although, we may not achieve the heights Prabhu Kambli Wale has reached or any other saint has got to but at least we should not disregard the fact that as a disciple we ought to abandon our limited selfish beliefs and notions based on sheer ignorance. We need to stop complaining about the circumstances and start walking the path they shown to us. We should not make any comparison with them but having them as our ideal, we must pursue the path they have travelled. 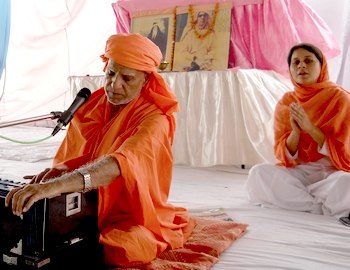 After the discourse, Maharaj Ji offered his tribute to Prabhu Kambli Wale and all the saints and aspirants. Later, to stir open the hearts of the devotees he sang a beautiful Ram-Dhun which brought all the devotees on their toes. Singing and Dancing together, they all reached to a deep trance like state. As if the clock had stopped then and there, forever. The beautiful melody, presence of the master and company of beloved aspirants and above all the inspiration and encouragement received from the Master fueled up the aspirations of one and all. Everyone wanted to dive deep and get united with the divine mother within, then and there.