Beating the Chill with Children 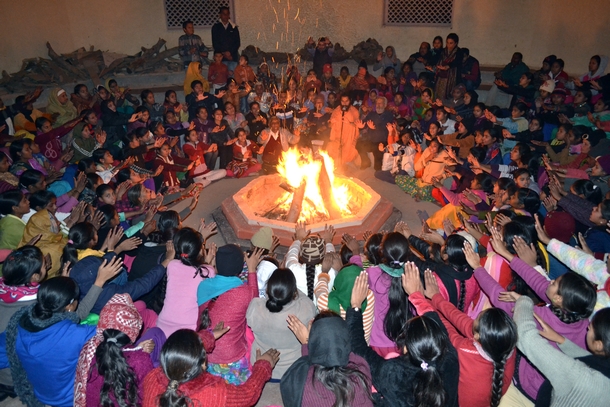 December 25-28: For many years now the ashram had been holding a Baal Sanskar Shivir for children during the last week of December. However, during the last few years various schools began closing down in the first week of January and hence some children could not participate in this highly anticipated camp. Therefore, it had been decided and publicly announced that this time around the camp would not be held in December; instead it is being planned to be held during the common summer vacations of children and that too in the hills of Sharti Ashram at Kullu.

But man proposes and God disposes. After having spent much energy in the hectic lead up to the inauguration of Tripur Shiva Peetham, probably the minds of some of us at the ashram had begun looking forwards to spending a relaxed winter this time around, that the Divine Will arranged to protect us from falling to sloth, slumber and laziness when it inspired the mind of Nandi – an active devotee from Bhucho Mandi, Bhatinda, who also happens to teach at a school there, to sow some spiritual seeds the minds of his school children and lo! His initiative brought a group of about 150 girls of Government Girls High School, Tapa Mandi to ashram. And not only the little desires of seeking restful pleasure were banished from minds of anyone in the ashram, but the very peace and quiet of the ashram were woken up by the free laughter and unending enthusiasm of the visiting children. The three days that the group spent in the ashram, though they were days of intense cold, but they became warm by the presence of children and even the sun shone bright during the afternoons, shifting the fog aside to grace the humble, loving and innocent children.

It would be usual to state that the children were taught Surya Kriya, Agni Kriya and Sanjivani Kriya and that they were told many noble things. But it is for the children to know and time would tell what they really learnt from here and how much they enjoyed their time. But if ‘parting tears’ tell a story of love shared, then they were there in plenty. If smiles of contentment tell a story of something achieved, then they were there too in plenty. But there is another side to the story too – the ashram, its inmates, the local devotees not only taught the children but the children taught them too. And they didn’t teach us, the way we do – through instruction. They taught us by their presence. As Swami Suryendu Puri Ji pointed out in course of the parting discourse (during the last Sunday Sabha), the children teach us that we are alive; that whatsoever situation may arise before us, it may daunt us for some time, we may even cry for some time, but the next moment we are back running, and playing with joy. That is childhood.

There is a child within every adult but it remains forgotten. Let us reconnect to it. There are children around us, everywhere. Let us be in their company but not to teach them; just to be with them. For children know life and the art of living it, probably, much better than us, adults!