30th March, Malke Ashram:  Bhagat Jagat Singh Ji was the one responsible for this new establishment (Shabad Surat Sangam Ashram) in Malke village. He was an ardent devotee of Prabhu Kambli Wale. While living a householder’s life, he performed all the saintly acts. He had set a good example of devotion through his own life which inspired many people from nearby villages towards this path of ultimate truth. When his time was about to end, he requested Shri Maharaj Ji to keep on watering the seeds he had sown in the hearts of young aspirants of Malke and nearby villages. Ultimately Shabad Surat Sangam Ashram came into being on a land of wilderness overrun with serpents. Every year 30th day of March, devotees from all the nearby villages gather at Ashram to pay tribute to this saintly person. A grand satsang is organized at this occassion followed by langar. 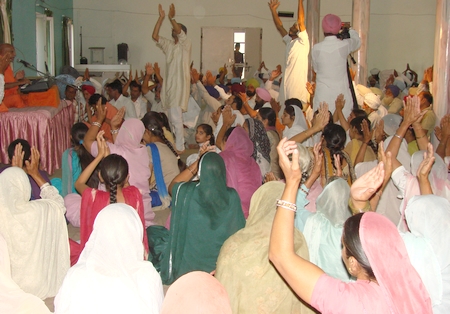 Keertan at the conclusion of the discourse