Maharaj Ji were in Rudrapur in the beginning of June. Following is a record from a sadhak’s diary covering the activities happening around Maharaj Ji, during those days. 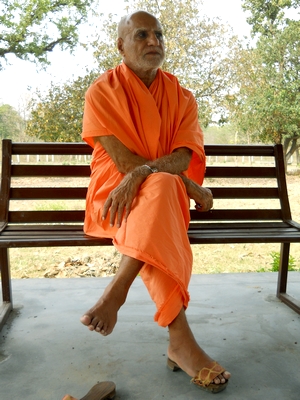 Maharaj Ji at a Aranya Vatika on way to Rudrapur

31st May: Maharaj Ji and various inmates of the ashram arrived at Rudrapur on 29th May for a week long stay. The two days here have been most splendid. Apart from the local devotees, devotees from Lucknow and Delhi too have arrived to partake of these rare moments in Maharaj Ji’s company. Today a discourse was organized towards the evening. Maharaj Ji chose to speak on food and sleep and the important effect they have on spiritual practice. Important points are summarized below:
• Sleep is a kind of meditation. It relaxes and energizes. In sleep all association to the outside is severed and a being unknowingly gets connected, to some extent, to the Divine power within. The center of breathing shifts to the throat.
• In meditation, the same process is carried out as in sleep; only that it is done consciously. The eyes are relaxed, the body is relaxed and the breath too is made serene and inwardly focused. Instead of leaving it through the nose, it is channeled into the brain while exhaling.
• When an unconscious association with the Divine in sleep causes such a change in one’s condition, the freshness, power, bliss attained by the conscious connection made in meditation is incomparable.
• Practicing in the recommended way, meditation causes a huge change in one’s entire life. One’s activities in the external realm too become more saturated with focus and love.
• Yes, it maybe that the results are not attained at once. The mind may waver. But one must not give up, else it would be just like someone opened a new shop and then soon shut it down, complaining that it had attracted few customers; or a baby was made to give up walking altogether for it fell a few times as it tried to stand on its feet.
• The mantra is used to focus the mind. Its meaning points to a certain transcendental state. Though, it may not be possible to discern this meaning in the beginning stages, yet, its goal being not anything of this world of 5 senses, it does enable the practitioner to uplift his mind to the realm beyond.
• Regarding food, it is recommended to those desirous of progressing in meditation, to at least abstain from a non-vegetarian diet.
As the evening mingled into night, Agni Kriya Yoga sessions were held on both 30th and 31st. 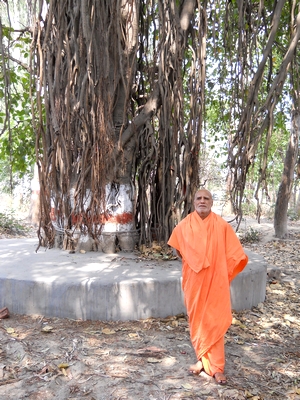 1st June: It is intriguing, instructing, inspiring, all at the same time to see any science evolve in front of your very eyes. Great was the enthusiasm that surrounded Albert Einstein in years following the General Theory of Relativity, where his every thought was sought by the mortals – as to what secrets of our world it would unveil.
About 12 odd years ago, Maharaj Ji used to sit with everyone and partake food. Then it changed over the years and today, he goes for days without food and water. Maharaj Ji started with Vedantic sadhana but in time, great secrets of Kriya, Hatha yoga too found a very natural opening in his stream of sadhana. Surya Kriya was invented. Agni Kriya was invented. It seems much creative work already accomplished for a lifetime. However, the inner path, to which very few of us have a direct access is extremely vast. And more so, when the goal of body-transformation or “divine life in a divine body” as Sri Aurobindo put it, is what draws the aspirant within. In his continuous research to expand his inner experience to the very pores of his skin, a thing deemed “difficult” by Sri Aurobindo in comparison to ‘stilling the mind’, Maharaj Ji has now been inspired to work within and without using the line of Vedic chants.
Let us not be mistaken to think it is some musical rendering of Vedic mantras. In Mahayoga things are seldom so trivial. When even sleeping, eating, excreting are given such a deep sense (as hopefully we shall cover sometime on this website) then what to say about treating the Vedas – which allude not to books, but the eternal science, the great laws of creation that the Creative Genius used to emanate this creation. More so, when it is about treating Samveda, about which Lord Krishna says in the Gita, that among the Vedas, He is Samveda Himself.
Travelling, sitting close to Maharaj Ji these days, conversations about Samveda, and in particular Sam-gaan (singing Samveda) naturally springs up. Just for a general brush up, the Vedic mantras are to be sung in a particular way. Each syllable is to be sung on a particular note, for a particular duration, with a particular intensity. In Rigveda three notes are used. Samveda utilizes all the seven notes of the octave. This is supplemented with the Veena (a string instrument) of the hand called Gaatra-Veena.
In this present tradition, the Guru Mantra is also to be sung. However, Maharaj Ji says, that singing Vedic mantras is still superior for they contain seeds of all knowledge. Through guru-mantra also all achievements and access to all realms is possible, but Vedic chants are a league in themselves (being of special importance in the practice of Mahayoga). Once, the throat is set in the rhythm prescribed by the Vedas, then by opening the knot of the throat, the chant enters from the Vaikhari to Pashyanti level. We can note here that in the science of chanting mantras, there are four levels: vaikhari, madhyama, pashyanti, para – which describe progressive stages as the gap between the mantra and its meaning goes on diminishing until the very utterance of word “fire”, sets fire ablaze within (saying ‘Ram’ or the fire bija-mantra, for example, can cause huge amounts of heat to be generated in the body). In such a state, the meaning or the goal of the Vedic mantra being sung manifests itself.
Today, at Bilaspur, a discussion ensued, wherein Maharaj Ji stated that he interprets the thousand streams of Samveda (which were once prevalent, but are now extinct) to be the numerous paths to understand and realize the true import of Samveda. In any case, Gurbani also states, “Asankh Japa” i.e. there are countless modes of japa. Every being and his practice and the way the Word evolves within, is unique. So, he opined that one may not get stuck in the issue of comparing different streams. Take up one stream and go within using that and that would then lead to manifesting the true meaning inherent in it.
This is also true of many other things. For example, take up the different modes of Indian Philosophy: there is Vedanta, Yoga, Samkhya, Nyaya etc. All these are steps on a ladder. For a particular rung, one is true. Then as the experience deepens, one understands how one leads to another. At the time of Rishis, such conflicts were rare, for, by tradition, everything was heard from the mouth of the Guru. Today, that tradition is extinct. Everyone can read and interpret them in one’s own way. A mere intellectual interpretation may be many leagues away from the truth.
It is wrong to believe that Shankaracharya preached that the world is false (jagat mithyaa). That is not the true import of Vedanta. The world of our own creation (jiva-srishti) is certainly false, however, there is also at the backdrop the creation of Brahman (which is true).
Further, the conflict between monists and dualists is also due to confusing the path or the process with the goal. A Vedantist practices by meditating on “I am He”. A bhakta practices “I am His servant”. The peak of any such path is oneness with the object of one’s meditation. For it is written in the Narada Bhakti Sutra, “Tasmin tajane bheda bhaavaat” i.e. that in the peak of bhakti there is a lack of any difference between the devotee and the goal.
The experience of Nirguna precedes the experience of Sargun, for example in the life of Shukadeva. Nirguna-experience occurs by denying, “Not this, not this”. But beyond that too, the same Brahman, manifests in a form as per the bhava of the devotee, as happened with Dhruva. The experience of Sargun before Nirguna is more of mental imagination. 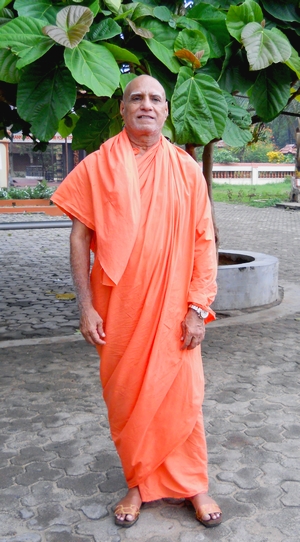 2nd June: Maharaj Ji opened his room around 3:15 p.m. After paying their respects at his feet, the sangat settled down in his room itself. Maharaj Ji were seated on a sofa. Conversations and jokes were shared. Following are some of the points recollected from what interspersed:
• Maharaj Ji began talking about Mahayoga or about transformation of the physical body. The reason that he takes food from time to time is to keep the senses working, else they may dry up, if left unused. Maharaj Ji said, that at one level, the lower organ of defecation can be kept opened by taking food. The waste would have to be expelled from the rectum and thereby it would be kept in use. Then, if one can simply drink water and expel that via the rectum then too that can be kept in useful condition. At the last level this work can be accomplished by prana.
• Then the discussion shifted to amrita. In the transformed state rasa is excreted from various pores: in the nose, in the throat, the brain etc. Even the waste that is secreted now, for example, phlegm in the throat, mucus in the nose gets transformed. In the bodily-transformed state instead of phlegm, mucus etc. rasa is secreted. The lower organs also excrete but that is not like ordinary waste. Those excretions have special alchemical properties. Further, it should be clarified that amrita is nothing liquid. It is power-vibrations. They manifest as a liquid when entering the mouth. Further, it can taste differently depending on the samskaras of the sadhak.
• Maharaj Ji were talking about a book he had recently read. It was the autobiography of a certain yogi. He said that it is quite fascinating. He told that his attitude is to not deny something until proved so. When probed about the skeptical attitude of scientists and intellectuals towards new things, he said, it is best to neither deny or accept anything at the outset. The thing is to be open to test the thing being debated about through feasible means.

Thereafter, a satsang sabha was organized. Keertan was held first and then Maharaj Ji spoke on death. The salient points are summarized below:
• At the time of death, the shakti within awakens and drawing in the consciousness spread throughout the body it rises. It hits at the knots on the way. Thereafter, it leaves the body through one of the sense organs depending on which samskara was most dominant in a person’s life.
• Those who want that their prana should leave from the head, should have purified their attraction to any sensory object. Whatever needs to be seen, he has seen, desiring to see no further. Similarly, this being true for the other senses as well. This is only possible through vairagya.

After the Agni Kriya session, sangat again sat with Maharaj ji
• For khechari, lifelong commitment is required.
• If people call you mad, no problems if you wish to become like Lahiri Mahasaya. Rather they should call you maha-pagal (supremely mad).