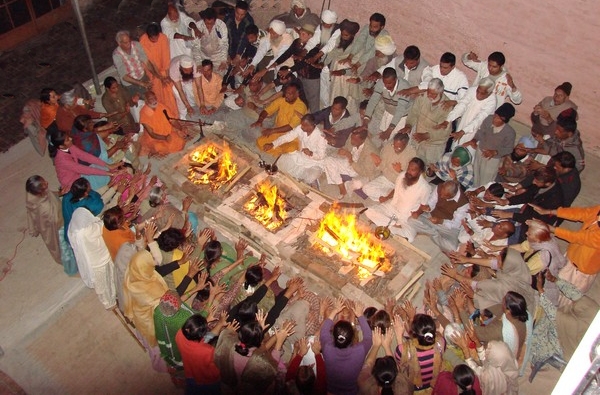 Dear reader, writing this just after the annual Shivratri meditation camp has drawn to its close after a majestically powerful session of Agni Kriya Yoga. This final day today, the participants sat continuously in the meditation hall for 6:00 a.m. to 6:00 p.m. Throughout the day they meditated uninterruptedly under the guidance of Maharaj Ji; taking just a glass of the special herbal tea and lassi which was silently kept near their asana. The atmosphere right now is especially charged with participants feeling truly blessed and blissed-out. Sure they all have renewed their energy levels to a maxima as they now will return to their arena of work to continue their inner quest even when going through the grinds of external activity.

The camp lasted from the 3rd to the 6th of March. On the three initial days, the day would begin at 6:00 a.m. with a meditation and pranayama session with Maharaj Ji. Then a SSKYoga session would follow(if the whether permitted).Following a light breakfast everyone would exert themselves in service done through hands and limbs like cleaning the ashram premises and so on. It was then time for the daily interaction with Maharaj Ji who would answer any queries that the participants had. So this time we had two discussions on the two topics of most vital interest: Breathing and Death:

Maharaj Ji highlighted in most resounding terms the indispensability of mastering breath (deepening, smoothening its motions along the way) until finally it would cease, resulting also in the cessation of the motions of the mind. As always, the talk turned into a practical session with participants being made to breathe and have it checked right there. Maharaj Ji told that the journey of mastering the breath is a life-long journey and one should just go on moving; without a single thought of delusion that says, ‘Now I have mastered it.’

On the grand subject of death, Maharaj Ji touched on what would be of interest to every single human being alive; irrespective of their beliefs and traditions (provided one is willing to lend some thought to yogic philosophy on death). After all it was discussed: How to die? All of us (not including the rare enlightened being) are afraid of death on some level because we do not really know what it is about. Yet, Maharaj Ji said that death should be approached in the most positive way: for it is governed by the Divine will which is always works in the benefit of the being. Now what is aimed at the last moments is that the being (jiva-atman) leaves the gross body through the head (the tenth-door) and not the other sense organs; for leaving the body through the sense organs imply that the cycle of birth-death-rebirth would still go on. But there are ways, through which even an ordinary human being, who hasn’t even practiced a great deal in his life can achieve only if he becomes a little more conscious at the time of his death. First thing, once it has been ascertained that the final hour is near (further, it is impossible that a being remains unaware of the approach of the grand happening of death  in his life; he should be open to these signals and not undermine them under the cacophony of his attachment to the outside world; we are not considering here deaths caused in sudden accidents) he should atleast give up taking solid forms of food, which cause the prana to be activated in the sense organs (for at the time of death their natural motion in inwards from the senses to the sushumna). The being subsisting on water should then surrender to the Divine Will. Generally, at the time of death the being becomes unconscious much like at the time of sleep. Therefore, every practitioner should try to approach his daily sleep like approaching death; give up all concerns of tomorrow as one is about to sleep and surrender to the Divine Lap. In this way, much progress can be made by anyone in attaining higher levels post-death and in the ensuing re-birth. Further the near and dear ones of the parting soul should not touch the body one the process is underway and someone should whisper a mantra in the right ear from a little distance (without touching); and of course there should be no emotional exuberance on display which should disturb the parting soul in this process, binding him back to the world. However, we would beg the pardon of the reader since this subject is too deep a topic to be discussed fully in a periodic website update. Those interested can drop in a mail for further clarifications.

The next meditation camp on the list is the advanced meditation camp during the last week of March. Participation in that is granted to initiated members provided one has attended a camp such as the one just concluded.