Brick by Brick, Breath by Breath Let’s Move Ahead!

20th December, 2011: The last time we met on this space in September, the construction of the meditation temple had reached ground level. Between then and now, the external structure has risen above the ground, ascending to full view. In a few days, the roof would be laid, and with this phase 1 of the work will be complete.

Since it has been a rather long time that we first mentioned the importance of and the motivation behind this project, it would only be pertinent to refresh our memories regarding the same. And perhaps we could begin as follows:

If one were to take a course in abstract mathematics, one may come to realize the great value of figures and pictures as an aid to understanding. An abstract is well, something abstract, and is generally hard to grasp. When this is so true of a field like mathematics, which can still be pondered through the resource of the intellect, then one can try to imagine the difficulties or rather the impossibility of comprehending the nature of the Infinite, the Divine – which resides, as per the numerous sayings of saints and shastras, in realms that exist beyond the mind and the intellect. And yet, the Divine is to be experienced and its experience has to descend from the “abstract” regions of the beyond-mind into the realm of our daily existence if we are to ever find a definitive answer to our basic craving for joy, bliss, fulfillment, knowledge, wisdom, truth, etc.

The rishis were incomparable spiritual revolutionaries who left for mankind accurate maps (concrete objects, if we would like it this way), which are more than mere ‘footprints on the sand of time’, to help it along its journey to the Infinite. These maps, in all probability, do not point to any external Shangri-La (as the various futile expeditions in search for these places verify), but to realms that exist within the human body itself. The means of this ‘internal probe’ too have been disclosed and are available to anyone wishing to have them.

Just like it is also possible to present the principles of Quantum Mechanics (a highly sophisticated branch of modern physics) in a fleeting way to a general audience, and yet the mastery of its nuances may take years of training, and understanding its philosophy, more than a lifetime; similarly, the science of inner awakening too has many facets to it. For the more casual observer, “meditation” may be a respectable word for doing nothing. For the one more interested, the process would acquire a deeper sense and the deeper one goes on probing, the deeper one’s understanding is bound to get. Sri Yantra or Sri Vidya is that aspect of inner-science which deals with its subtleties in a most intimate way and is the map to the Infinite, left to us directly by the researchers of the Infinite. In this vein, let’s read what Maharaj Ji writes (extracted and translated from Kund Agni Shikha, Oct.-Dec. 2011, page 11):

One that is more ancient than and also permeates the causes of creation (Brahma), sustenance (Vishnu), destruction (Mahesh), know that to be “Tripura”. This is also called Sri Vidya or Sri Chakra. The place of its worship is named “Tripur Shiva Peetham”.

“Sri” implies the eternal, primal force that manifests as prakriti. “Vidya” stands for wisdom or the knowledge of arriving at that wisdom. In this way “Sri Vidya” stands for the wisdom of “Sri” or the knowledge of arriving at “Sri”. And the practical map, the concrete guide to this is what is called “Sri Yantra” or Tripur Shiva Peetham. Sri Yantra also symbolizes the Omkar. And just like the entire creation, manifest and unmanifest, is Omkar, know it to be the same for Sri Yantra as well.”

Maharaj Ji further describes, “Where the paths of Vedanta, Yoga, etc. impose certain conditions which their practitioners must adhere to succeed, the path of Sri Yantra is so expansive and grand that anyone desirous of walking the inner path, will find the door open.” Quoting the Yogini Tantra, he further writes, “Anyone who believes in the guidance of the Guru, and is keen in the worship of the devas (the subtle forces) is fit to walk this path, irrespective of his current position in the evolutionary ladder.” This statement is to be understood against the backdrop that the paths of yoga, Vedanta, etc. were not prescribed by the texts for those whose main inclination was in enjoying the sensory world. But no such restriction is imposed in regards to the sadhana of Sri Yantra.

With such motivation, the work is in progress at both, the external site of the Tripur Shiva Peetham, and in the practice field of many practitioners. It is a two-fold science that unites the forces of the macrocosm and the microcosm i.e. unveils the microcosm in the macrocosm (yat brahmande tat pinde), and hence the construction of Tripur Shiva Peetham is bound to take place in both the realms.

The news posted from time to time will keep you in touch about the developments. Meanwhile, you are also invited to explore more about the sadhana of Sri Vidya and Tripur Shiva Peetham, by being a part of this two-fold process. 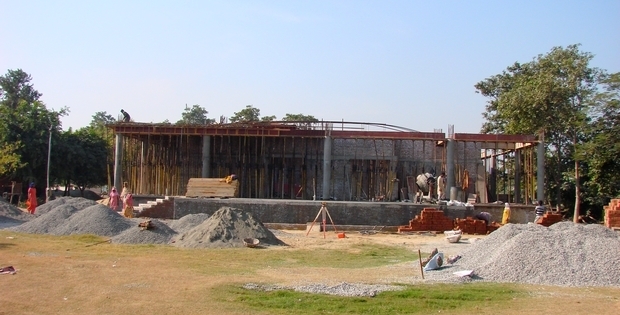 The View From the Front