Delhi is aspiring, And you? 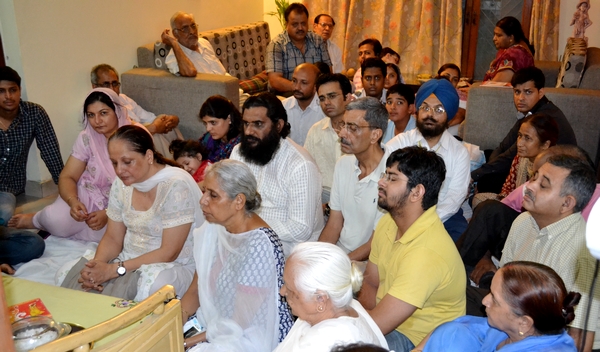 5th Jul, New Delhi. Maharaj Ji left for Delhi on 4th night, along with Swami Suryendu and Sadhwi Yoganjali to catch the flight for Canada on 6th. It was a precious opportunity for those in Delhi who couldn’t reach Malke Ashram to pay their reverence on the special occasion of Guru Purnima. Moreover, this was a bonus chance for those who had visited the ashram to take Maharaj Ji’s blessings one more time in person before he goes away for a month. So many devotees from various places reached Pal Ji’s house where Maharaj Ji was residing and an informal satsang took place. Most of the people must be aware that to have Maharaj Ji speak one has to provide a sound reason and there were many since many devotees had attended his splendid speech on Guru Purnima. They were all deeply stirred by his invitation to celebrate every day as Guru Purnima and wanted to discover the ways to it. 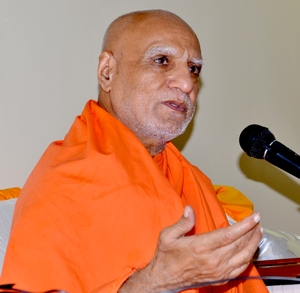 Higher levels of sadhna & how to approach them:
Ashish Atthi was the one to break the ice by enquiring about the advanced levels of sadhna. He asked if there were further initiations, once an aspirant had received mantra-deeksha and what was the criterion to prove eligibility for them and what were the clear sign of progress. Maharaj Ji explained, “Indeed, there are various levels of sadhna and as you progress, you would know them. Similar to worldly education, once you complete a level, entry to the next higher level is opened before you but if you don’t complete the early level, you must go on with it. Unlike our mundane world, there are no shortcuts in the spiritual world. There are various levels of mantra-deeksha itself and depending upon the nature of an aspirant many complementary practices could also be suggested. Further, there could be shambhawi deeksha, khechari deeksha, shaktichalini deeksha, kriya kundalini deeksha, nadanusandhan deeksha, and much more. But most important point is that an aspirant must pursue his practice regularly with sincerity and interest and also report back to his master or the guide from time to time. Since a student can never test out his progress, only a guide or guru can decide what additions or improvements are required for him and when. However, general practices such as Surya Kriya, Agni Kriya, Sanjivani Kriya etc. could always be performed alongside and scriptures (the original texts and not commentaries from modern thinkers) could be consulted to strengthen the aspiration. A clear sign of one’s progress however, is constantly increasing interest in sadhna and reduced craving for worldly pleasures and possessions. Nevertheless, such a person may carry on his worldly duties even more sincerely as a service to God and not for any personal interest or profit. This would be evident by his apathy towards praise or insult, gain or loss, comfort or misery. Compassion towards all the beings would be a complimentary attribute. Later, a level comes when an aspirant gets connected with the inner source of divine energy and then he/she may go on even without an apparent external guidance.”

“But what sort of mantra we can start with and how to chant it. Moreover, would plain reciting of mantra help us when we don’t know its meaning?” Ashish requested further gen from Maharaj Ji. “Well, there are various kinds of mantras available to us through religious texts or spiritual lineages. But to make a proper selection we need to recognize that mantras are not merely group of syllables or an insensate prayer. Mantras are rather powerful tools which help us discipline mind and strengthen pranic force, the two guiding force in our life. There are few popular categories of mantras, in addition to various religious quotations or sayings of saints used for contemplation –

Remember, as long mantra or any practice for that matter is based on ego, it cannot bring us long lasting power or happiness. Taking this discussion into consideration it should be clear that we could start at any level but finally we have to grow with it and get connected with its source in intellect, mind, and also the body. More than its literal meaning our intentions should be unequivocal.”

Role and importance of Guru:

A new comer, mystified by all this discussion, murmured, “If our liberation depends fully on Guru then why do we need to do anything and why not the kind-hearted Guru dispel our misery and take us to heaven? It is often said that even at the time of death Guru may save us.” Maharaj Ji noted his remark and transferring a caring look started answering his doubt. “Mother wants to feed her hungry child out of love and care but the child is busy playing with his short-lived friends. He doesn’t come near to her rather abscond if she comes after him. And if he is caught sometime and fed, he doesn’t mind to throw up then how could he add muscle. A person is wounded but he wouldn’t let the doctor examine his wounds and refuses to take medicine then how could he ever be healed. Guru sincerely wants to help the disciple but blindfolded with ego, he doesn’t follow Guru’s advice then how could he be liberated. Actually, ego detains him from having power by separating him from the source of it and confining him into the petty limits of this miserable world. The liberation or the power or the happiness is not to be achieved from somewhere outside, these are rather inherent to his nature, but ego separates him from his true nature. All one needs to do is to remove this ego but how could ego be removed with the ego. Therefore, guru helps the disciple to get rid of ego and reveal his true nature only if the disciple let him do it. It is said correctly that during death process Guru or the Gurumantra may liberate us but only if we remain consciously connected with that in those last moments which is possible only if we have done so effectively in early life.”

Hearing this another new participant I. P. Singh sought help on his spiritual hold-up, “Guru Ji! Whenever I do pranayama, meditation, keertan etc. my body and mind become standstill. I feel very relaxed and joyous in this state yet it is evident to me that I’m far away from the ultimate peace but I don’t find any clue to advance. So, how do I go beyond this?” Maharaj Ji spoke with his classic smile, “You can easily lift your one leg and stand on the other but if you had to lift both the legs, you cannot do that without an external help. Similarly, you cannot go beyond a certain limit on your own. An external support, what we call guru, is a must. Even in the physical world where we can perceive everything with our senses yet without a teacher we cannot grasp them completely then in spiritual world where we have to go beyond the senses and the ego, role of an accomplished master or the guru is inevitable. You will have to learn the further sadhna from somewhere keeping your personal knowhow or the ego aside”

Another new comer asked, “Cannot we have siddhas and adepts from past as our guru who are not present in physical body anymore? And can we connect with the guru or the divine in a specific form?” “Well, there is a great possibility of being fooled by our mind. A saint would never come and say I’m your guru because real saints and sages work as the servants of God and never claim any authority whatsoever. It’s the disciples who acknowledge them as their guru. So these visions or intuitions or notions of having a saint from past as your guru may become utterly misguiding until you have evolved above the material world to a great spiritual height. Moreover, usually we are not able to comprehend and follow the teachings of a living master then how is it possible in case of master who is not present in physical form.” replied maharaj Ji. “About connecting with them in a specific form, you should know that a hungry child may ask his mother to give him food but he would never insist upon her to serve the food in a particular plate. If he does so, it means his hunger is not real.”

This simple answer was accepted at once and amidst laughter everyone recognized the deep meaning hidden in those apparently plain words. Meanwhile, Mr. Virendra got curious about why we have to run from pillar to post if the power lies within us. Maharaj Ji replied in his mystic style, “A seed is essentially a complete tree but without submitting itself to the ground and soaking it up deep within over a long period of time along with water and sunlight, it cannot appear one.”

This answer made everyone look within and do some introspection. Then asked Ms. Sneh Suri anxiously, “How do we find enough time to perform spiritual practices tied up in mundane household activities? It seems this birth will go waste.” Maharaj Ji spoke in calming tone, “Spirituality doesn’t mean doing specific kriyas or yogas. All it means is to keep the divine in heart of every action or reaction. There have been many saints who achieved the supreme state living a household life.  Remember, you have chosen this so don’t resist it but make use of it to even your old karmas. Perform the household duties as a service to God by not expecting anything out of it and dedicate all the other time for prayer and practice. Even this would prove sufficient enough for liberation.”

This inspired Ms. Basant Joshi to put forth her difficulty in dealing with physical pain. Maharaj Ji reminded of Swami Dayalu Puri Ji who had many physical problems towards his last time as a result of early neglect of the body but neither he ever complained nor he expressed any wretchedness. Maharaj Ji said, “In pain, consciousness naturally travels inside the body. Instead of resisting it, if we just observe it letting our prana travel through then our mind will start travelling inside and in the process even the pain may subside.”

This answer took everyone in past and they started sharing the vivid memories. Slowly this expression lead them to comparison of past with present and then a new question came up. A lady complained about the disruptive behaviour of the children in present time and demanded the solution. Maharaj Ji said, “You make the children so be what you want your children to become.”