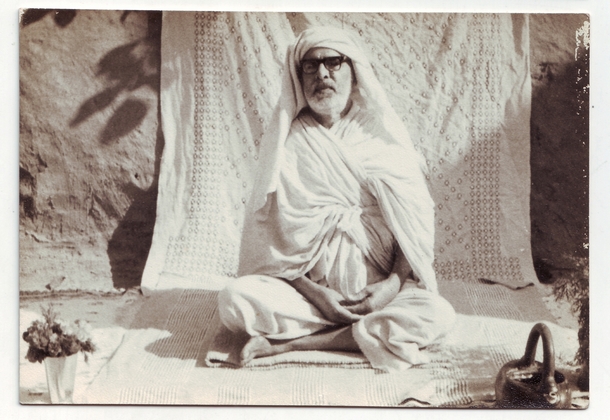 The Story: Winters usually usher in a period of rest and hibernation. But there is a very euphoric saying from the spiritual canon that the saints remain awake while the world sleeps, and they sleep when the world is awake.  So this winter, Sadhwiji and other valiant souls spent working hard in the lab of their own bodies, doing chaaliyaa sadhana, which Maharaj Ji says takes the spirit of a warrior-in-a-battlefield to complete or wherein burying all the surface tendencies of the body, one has to light the fire of yoga inside (the featured article in the current issue of the quarterly, Kund Agni Shikha, is on Chaaliyaa sadhana too). Many aspirants remained immersed in seva and sadhana all this while, both at Mallke and Qila Raipur Ashrams. So by the time the winters had started to bid a slow farewell, it was January, the 26 – the Nirvana Diwas of Swami Dyalu Puri Ji – which also marked the completion of Sadhwiji’s retreat. She had emerged on the 24th (to adjust to outer environ before the grand ceremony of the Nirvana Diwas), but observed silence for two days. Finally, when she spoke addressing the sangat, it was the heart of a disciple speaking with love, devotion, humility, and plentiful tears about the grace of the guru, about selling one’s mind at the guru’s feet. We have tried to share the highlights of what was said. Hopefully, we have been able to put across something of benefit below for the readers on their respective spiritual paths. 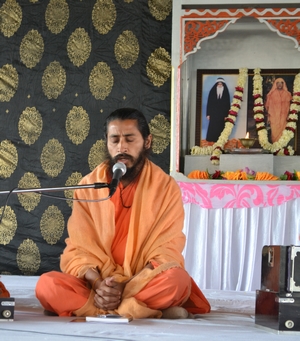 Swamiji spoke cogently and with rich emotion about Swami Dayalu Puri Ji. He also said that just like it makes no sense from a drop to claim, “My sea”, for it itself belongs to the vast sea, similarly, the disciple ought not say, “My Guru” but should surrender to him in the spirit – “I belong to the Guru”.

Thereafter, Swamiji, wishing not to speak much for according to him Sadhwiji’s speech sufficed all that had to be said, yet gazing at the life of Swami Dayalu Puri Ji in his mind’s eye, as he began to speak, words, emotions, and tears gushed out of him in rich profusion. Below are some diamonds from what he shared staright from his heart:

Devotees who partook of the strong emotions emanating from the memory of Swami Dayalu Puri Ji’s life.

Swamiji concluded by sharing three new initiatives with the sangat:

1. A Body-Mind Shaping Camp is being planned in Qila Raipur Ashram this year, in addition to the one at Mallke Ashram. Earlier such camps could not be organized here because there weren’t sufficient rooms for sangat to stay in large numbers.

2. Another initiative is the renovation of the temple complex. Shri Maharaj Ji in his last address to the Trust Committee had expressed a wish that like there are samadhis of Kambli Wale and Swami Dyalu Puri Ji at the temple shrine, there ought to be something in memory of Swami Mewapuri Ji. The audience applauded this plan.

3. There is a goshala at QRP Ashram and the administration was wondering how to deal with the proliferating numbers. So it was decided that few cows would be gifted to some volunteers from the sangat. In this way, they would get pure milk to drink at their homes, and also that serving gau (but not at cost of sadhana) is a noble deed, and that in this way a link of love would be maintained between the devotees and the ashram.

The gathering concluded with the chanting of Raam-naam. 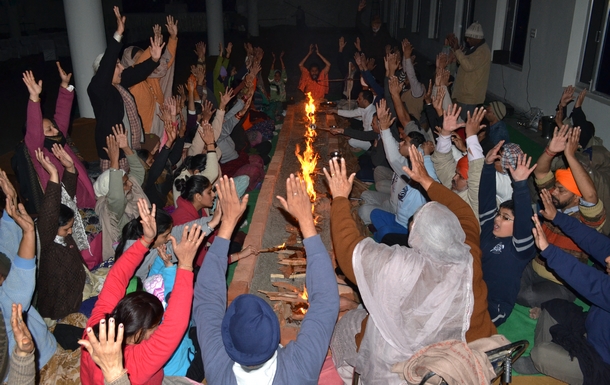 The powerful Agni Kriya session also took place on the evening of 25th January, on the eve of Barsi.