Finally, from Paper to the Platform (Update on T.S.P.)

Workers leveling the columns (left); seen in the distance, one amongst the under-construction workers’ huts (right).

25th June, 2011: Yesterday (24th June), finally, the columns of Tripur Shiva Peetham emerged from the meticulous drawings of Mr. Ashok Atthi (devotee and Structure Engineer, who for now has made the ashram his abode, as he would be staying back and overseeing the construction work from its nascent stages to completion – a period of approx 2.5 years) and marked themselves on the grounds of the SSS Ashram. With these markings done, the first momentous step has been taken. Soon the raw material (sand, cement, gravel, bricks, rods, etc.) would be arriving and the environs of the ashram starting to play to the sounds and vibes of humming machines, breaking bricks, local dialects of workers, and so on. Right now there are about 8 workers (along with their supervisor) who have arrived and they are in the process of preparing huts for themselves and the other workers due to arrive soon. Initially, there were some concerns about serpents that still make their appearance, especially in these hot months of the Indian summer, which had implanted some fear in the minds of newly arrived workers. But, due care has been taken and the huts are being constructed in a clean, clear tract of land, far away from the mound of bushes and trees, collected after the little last remaining mound in the ashram was uprooted, and supposedly the last hiding place for the remaining serpents. 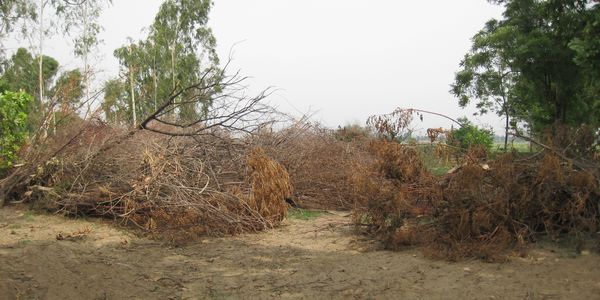 Remains of vegetation of the lifted-mound; the fuel for the workers over the next two years; and the supposed new hiding resort of serpents.

This much for the external realm of work! 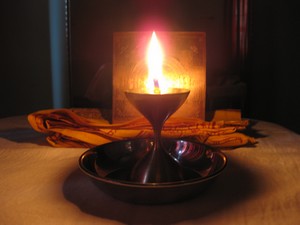 On the other side, the practices related to the Sri Yantra are in full swing amongst dedicated devotees, both ashramites and householders. After having imbibed the 2D versions of the Sri Yantra, now, the devotees have moved on to make a 3D version of the same. Simultaneously, meditative practices with the Sri Yantra are also carried out. These are intermediary stages to when Sri Yantra would have to be drawn within the heart and mind of the practitioners through the brushes of breath and the colors of nada. Noteworthy also is the 40-day practice of Agni Kriya Yoga that had been carried continuously on the site after the land sanctification ceremony.  Well, the journey continues…