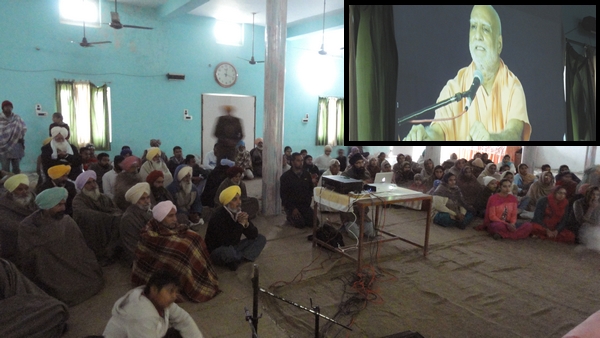 Maharaj Ji’s discourse, given on the day of Tripur Shiv Peetham’s Inauguration, underway in a virtual environment during the First “Last Sunday Sabha” of the year 2015 at Shabad Surat Sangam Ashram.

25 January, 2015, Mallke Ashram: Well, let  the above pic. catch no one in surprise. Sure enough it shows the “Last Sunday” gathering at Mallke Ashram with the sangat listening to Maharaj Ji’s discourse. But the picture in inset is that of Maharaj Ji, on screen. Yes, in a first, during this first Sabha of the Year, as the schedule of events would have it, neither Swamiji nor Sadhwiji were present at the ashram. Both of them are at Qila Raipur at this time for the Barsi of Swami Dyalu Puri Ji. But, not intending to break the routine of sabhas, Swamiji inspired the idea of having a virtual discourse. The ashram had been gifted recently with a Sony Projector by an American friend, so this seemed to be an opportunity to put that to use. Swamiji had just prepared the DVD of the inauguration program of Tripur Shiva Peetham, so that was what was projected onto the screen, this Sunday. Following the highlights of the inauguration program, the sangat listened to Maharaj Ji’s discourse that he gave on that day. It has been many months since we all saw Maharaj Ji, who has been in solitude. So even seeing him on the screen brought tears of remembrance to many eyes. The sangat remained hooked to their asanas till the very last. In the end, when they were asked if they were willing to sit more for the Ram Dhun that was also the part of the DVD, everyone nodded and again that sweet melody of “Shri Raam Raam Raam…” satisfied everyone’s ears.

It was beautiful to listen to the discourse again in which Maharaj Ji talked about 3 things. First, was about what the Sri-Yantra represents. Listening once again from Maharaj Ji the grandeur of Sri-Vidya we could only feel happy that we too have been acquainted with this vast practice. Second, Maharaj Ji talked about the step that he was taking – advancement of the path of Mahayoga, his retirement to the Himalyas. Third issue dealt with the upkeep of the ashrams and the well-being of the spiritual aspirants for which Maharaj Ji had declared Swamiji and Sadhwiji as his successors.

During the discourse, Maharaj Ji had said that this path is really easy, only if one accepts where one is right now. A small child can only walk, he cannot run like an athlete. So let each sadhak identify where he stands on the path right now, and be truthful about this. If he then goes on taking small or big steps according to his ability, surely a time will come when he will reach the pinnacle.