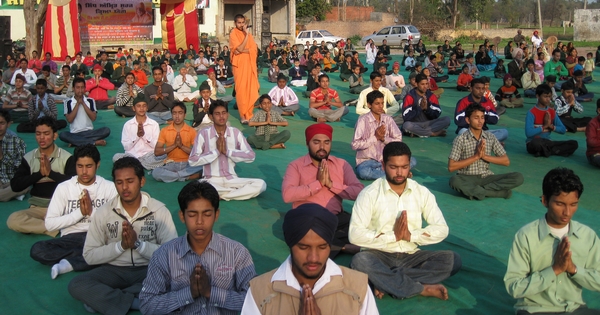 Mattewara, 26-27 February. It was a long-time wish come true from devotees of Mattewara as Swami Ji not only conducted Surya Kriya camp there but also spent his time solving problems realted to health or spirituality of every individual there. Two days seemed too long as every one was entertained and satisfied but at the same time no one realized when this time was over. In words of Rajesh Bhatia, one of the main organizer and in-charge of Jiwan Jyoti Public school there- it all seems like a dream and even before we could realize Swami Ji is with us, time is already arrived for his departure. Anyhow, four sittings in two days charged everyone to a great extent. On the eve of 26th sky was covered with dense clouds with sudden pour of rain every now and then. Eevn in the morning none was expecting Sun shine but as soon as Swami Ji started chanting Surya Gayatri accompanied by all the the particiapnts, Sun appeared making a clear opening through the clouds and stayed all the time during Surya Kriya. All the four sessions of Surya Kriya had ample of sunlight and everyone felt energetic after doing the Kriya. Sr. Baldev Singh also accompanied Swami Ji and taught various asanas and breathing exercises to the participants. Many villagers participated in the kriya as they had already witnessed how Rajesh’s mother, who was severely diseased and sick before she started doing Surya Kriya, got rid of all her ailments.