The Trio of Sanjivani Kriya, Agni Kriya and Surya Kriya in full flow

6-11th August, 2011. After spending the first week in Brampton, Maharaj Ji were flown to Vancouver where more thirsty souls awaited his arrival. Here summarizing some parts from that visit and the messages delivered there: 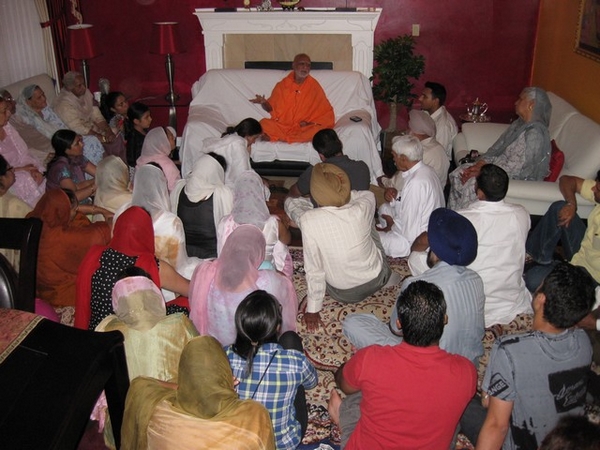 A scene from one of the gathering in Vancouver

“There are two methods that will help us to go within: sevaa (service) and simran (meditation). Just like a man walks with the help of two limbs and two feet, a bird flies on its two wings, so is it here; service and meditation. Usually, it is sufficient to practice meditation for an hour daily, sitting closed eyed and doing the technique properly. And then one is to go on practicing throughout the day, walking, standing, talking, as much as one can do. This is also to be done.

"We keep our hand tied!"

<A question is asked, what if our mind does not gels with the process of meditation? Maharaj Ji continues…) To make the mind absorbed is not our job. That is the Lord’s job. Our work is to merely practice and go on practicing in the right manner. Usually, we do just the opposite. We say that first the mind should be absorbed and then we shall be able to practice. But this is should not be the attitude. In truth, we hardly serve or meditate. The fruit of service and meditation is union with the Supreme Self that resides within our own beings. When we go within, He would by himself attract our mind and consciousness towards Himself. But if we never go within then how would He pull us onwards! If we offer Him our hand then He would pull us up, but we keep our hands tied behind our backs and ask Him to pull us! So our work is to serve and meditate, but in the right spirit.

Let us understand this with this example. Suppose a man says that he wishes to learn to swim. Now merely reading about various strokes in books would not help him, neither would sitting on the bank teach him to swim. Eventually, he would have to take the plunge. But the moment we go into the water, we retrace from the fear that lest we may drown. We say, first we will learn swimming only then we shall take the plunge (all smile)! This is what we are doing, isn’t it? And we say, that first our mind should become concentrated, only then we shall practice. We feel until our vritti (mental vibes) is yoked within, only then meditating is fruitful and blissful, without that it isn’t of much use. Many times, we get dejected and say, “Oh, leave it! Enough of it! The mind is never tamed. What is it’s use!” This is the biggest pitfall (Maharaj Ji laughs).

It is right if someone can yearn deeply in case his mind does not bend down to repeated practice. This is called vairagya. Despite repeated practice, if one is unable to stem down the tide of the mind, one should search where exactly is he going wrong, where is he lacking? In any case, concentrating the mind is no mean achievement either. But in any case, if one has set aside a time for practice, say half an hour or so, then during that time one is to do nothing else but only practice and practice in the prescribed way.

Amrit-Vela does not merely refers to the early hours of dawn.

<A question is asked on the usefulness of meditating in the early hours of dawn, usually called the hour of amrita in spiritual terminology…Maharaj Ji explains the import of the hour of amrita> Amrit-vela is that time when the body is relaxed and light, and has had its sufficient amount of sleep. There is no amrit-vela outside, it is within the body itself. But yes, if we live in harmony with nature, eat, sleep and wake along with Nature, then inner and outer get connected. But if we eat late and sleep late, then our amrit-vela would also be late. Now here (in Canada) when it gets dark by 10:00 p.m. then the meaning of amrit-vela also changes. Well, let’s go a little further and discuss about amrit-vela in a little more subtlety.

What is amrit-vela? In the earlier times, say by the time the sun was setting, the people used to have their last meal of the day and in about 2 hours time they went to sleep. Now what happens in sleep? The process consists of many stages. In takes about 3-4 hours for someone to enter into deep sleep. The pituitary body becomes active. The melatonin is secreted by it. It ordinarily occurs at around 2:30-3:00 a.m. in the morning, if one has gone to sleep by 10:00 p.m. The floating samskaras of the day’s turmoil have also found rest having been released through the dreams. The secretions of the melatonin are begun to be absorbed by the body in the sleeping state itself. Simultaneously, in the outer world also an atmosphere of peace and tranquility is built up. The rays of the sun, falling on the moon, reach the earth. If someone can make this state as a means of meditation i.e. someone who knows to absorb himself in meditation, whose meditation results in truly quieting of his mind, such a being will also be helped by the supportive atmosphere outside; for it is the very nature of sunrays (during the day) to draw the focus outwards. There is keertan, there is japa and there is meditation. During this time one is not to do keertan, or do japa but immerse in meditation; one who can do so. In such a state, if one can absorb himself in meditation, then he would succeed in increasing the secretions of the pituitary and pineal bodies.  But such a state is not usually attained. Hence, we say, that when the body has been totally relaxed that is the ideal time to meditate.

In the Gurbani, it is said that the first thing to be done on waking up is to meditate. But we see in Punjab, that first thing that is done is that loud speakers are given full realm of space to expand their voices. That is not in the spirit that Gurbani mentions. Neither are we to read the Gutkas (miniature books composed from particular sections of Gurbani) nor bathe, the first thing to be done on getting up is to lose oneself in meditation. The meaning of meditation is rise above all tendencies of the mind, to rise above all senses and go within.

But what we usually do? We get up at “amrit-vela” and bathe and chant. But it is clearly said:

So the first importance is not given to bathing etc. but to meditation. This is extremely subtle. And yet, it can be said, that meditation is beyond many of us. Therefore until we reach a state where we can effortlessly lose ourselves in meditaiton, we say, that get up only when the body is fully relaxed, take a bath and then practice.

If one truly drinks the nectar (amrit) then there is no want or desire, no greed, sorrow or affliction. That is true amrit–vela. It should not happen that for sake of following a ritual blindly one deprives oneself of the immense and indispensable benefits of sleep. Therefore, only rise once the requisite amount of sleep has been had. It should not happen, that one is deprived of both the inner and outer amrit-vela; practices lazily in the morning and feels sleepy throughout the day.

Therefore, it is best to take the requisite amount of sleep. Further, it should also not happen that on this pretext one begins to sleep for 10 odd hours. That is not sleep either. Sleep is such a thing that you can go on increasing it as much as you want. But then it does not remain sleep either; just like you can go on adding water to buttermilk, but then eventually that does not remain buttermilk at all. The hallmark of healthy living is to eat and sleep right. Understand the needs of your body.

It is said that a rare being identifies the needs of the body. Either we give it too much, or give it too little on the pretext of austerity and ego-boosting. It is said:

If you eat too little then you suffer in agony, if you eat too much then you become diseased. Rare is the yogi who understands the midline between these two extremes. Similar extensions can be made to sleep as well.

The taste does not lie in the chocolate.

<A question is asked on the difficulty of controlling the tongue in devouring delicacies…Maharaj Ji replies> That is because we think the taste to be residing in the outer object. But through meditation and practice, one comes to know that bliss is really within, and that I am different from the body. Our mind tricks us believing that more and more bliss can be attained by enjoying more and more quantities of objects outside. Hence, we eat more than is required. Look at animals. They never eat more than what their bodies demand. If an animal is diseased, it never eats. Why then do we eat, even though ill? It is our mind’s trick. The truth of bliss as being within oneself is realized when the mind is thoughtful and detached from the senses and the sense of ‘I’ in the body. This is not so easy for the mind is mixed with the body. But all said, at least we can make a rule: that whatever that has been served is the Prasad (sanctified food) from the Lord.”

<In the last, Maharaj Ji urges all to write down their questions for future gatherings, for the questions that are asked verbally, are seldom our real questions having just propped up out of an ensuing conversation. The gathering concludes with chanting of OM.>