26 June, Brampton. It was time for monthly gathering at Nanaksar Gurudwara at 144 Kennedy Road in South Brampton being full moon night. In addition it was the occassion to memorise the day when Saint Kabir’s had assumed physical form in this physical world way back in 15th century AD. Sadhvi Yoganjali Chaitanya was the guest speaker for the occasion. Many renowned performers had already presented devotional songs and stories and few were still waiting for their turn when Sadhvi Ji arrived there. The whole atmosphere was serene, enchanted and prepared to assimilate divine nectar  by now. Sadhvi Ji’s appearance on stage caused a pin-drop silence. Her deep voice touched every soul when she explained to them the very idea behind celebrating full moon night. She told to them that this world is made of duality and thus follows a cycle at every level. Liberation means to break this cycle. Just like we have full moon every month but then it starts decreasing and consequently there is no moon. Spirituality aims at going beyond the cycle and add further light to full moon and not litting it diminish. 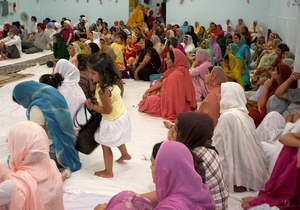 This is what saint Kabir had done who crossed the cycle of even life and death so this occassion we all should realize the fact that we all are potentially divine and explore deep inside for the realself. The moon in the sky may fade away but if we could awaken the fire insidde navel by chanting the ‘Naam’ or the seed-mantra given by the ‘Guru’ or the spiritual master then it will enlighten the moon in the head region. Then all the ignorance and impediments would be eradicted and the spiritual moon will shine for ever.