25 December, Shabad Surati Sangam Ashram, Malke, Moga: And so Swami Ji began.. ‘With another year about to pass, lets just go through the things those need amendments so that they do not get repeated in yet another year. That’s true that He is the ultimate doer. But His power works through this body. And in order to realise that power, we must make this body a true instrument of that divine power.’

Now, let’s go through the sublime talk, which was preceded by some questions from devoted aspirants. 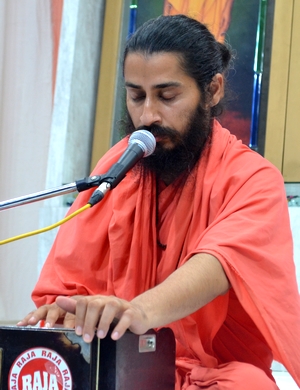 Question 1) Upon doing even a little bit of practice, it seems like our ego has empowered. For instance, a cricketer hits a ball so hard that audience holds it breath just to see if it goes across the boundary for referee to call it a six. But until that happens, everyone is on a stand still. Similarly, as long as He is not realized, nothing has happened yet. Because once He would be realized all our doubts and limitations such as hunger, thirst, sleep, lust, greed, etcetera would cease to exist.

Question 2) What holds us back from a blind submission; in other words, being a true devotee? The moment little hardships whether physical or mental tickle our way  that instant we loose our calm and choose to back down. So, as long as we cannot visualize ourselves beyond this body, it is not possible.

Question 3) Being a householder, how to make out time for practicing Guru-mantra? Regardless of where we reside, it is we who need to act wisely. It’s a fact that we do not keep on working for all the 24 hours. Therefore, it’s all about priorities. And even more than that it’s about digging in deep that do we even realize its importance. Because if we would have been realizing that, we would not keep on ignoring practicing that on the name of responsibilities and necessities, without a doubt!

Also, there is no bye-pass. Such stumbles prepare us well through ups and downs of life to finally embrace that divine supremacy. Secret lies in not bringing yourself to halt at speed breakers being scared. It’s a do or die state because He, the illimitable cannot be designated a second place. Otherwise, it’s a sheer drama on one’ part. Also, we must understand that just sitting with closed eyes doesn’t mean practice has been done.

Till the time we do not go beyond our physical identity, i.e. ‘I am so and so’, first step is not even taken. And as long as we do not go beyond this physical realization, the divine realization, i.e. ‘I am His excerpt (ansh)’ won’t find its place by our soul. Going further, if I am His ansh, then every other entity outside this body is also His ansh. However, our ego almost always empowers on the name of age and experience, which we believe is much better than others. And that instant parmarth ends. It’s more like a winter morning when we might not see sun due to fog but we understand that sun is there. Similarly, God resides within all. However, curtain named ignorance needs to be drawn. And the technique for that is indefatigable service (sewa) and undeviating practice (simran) of Guru-mantra.

To add valor to it, as a New Year resolution, let’s appoint a personal checker by penning down our daily progress before we call it a night and go to bed. This report card, to be maintained under Guru’s guidance will depict a clear picture of the physical, mental and behavioral milestones yet to be hailed by us with a sole purpose to become one with the lone Him.