Guru Purnima: A Call to Awaken unto one’s True Self

15th July, 2011: Over some time now, it has been a pleasure bringing to you Maharaj Ji’s discourses in a near verbatim spirit. Many of you highly appreciated the endeavour and we were keenly looking forward to repeat to you word by word, what Maharaj Ji would say on this auspicious occasion. However, that was not to be!

The day started very early. Majority of the inmates were up by 3:00 a.m. and within an hour were well alert on their duties. The celebrations started at about 5:45 a.m. when Sri Maharaj Ji came into the pandaal. Then one by one, devotees lined up and proceeded to offer their obeisance at their revered Gurudeva’s feet. Maharaj Ji reciprocated with all his love and today there was an additional tikka to go along as well, which Maharaj Ji applied on the forehead of every devotee. Prasadam was also given to all the devotees. In the background, bhajans praising the glory of the Guru were continuously sung, and the atmosphere soon invited the feet to dance and heart to throb in anticipation and devotion. It took almost two hours, for this initial session to complete.

Thereafter, Maharaj Ji went into his room. Meanwhile, delicious breakfast was offered to all the devotees, who had arrived after journeying for more than 24 hours to secure their presence at Guru Purnima. Everyone was filled with emotion, and one could not even trace a thin line of fatigue on their countenance.

The second session began at about 10:00 a.m. The gathering was once again blessed with the presence of Sri Gurudeva in their midst. Many devotees, who are also dexterous musicians, presented their flowers of devotion through beautiful musical symphonies.

At last, it was time for the tide of discourses to take hold of the audience and transport them into an inspired realm. Sadhviji, Swamiji and Maharaj Ji were to speak in succession. Sadhviji spoke full of devotional fervor; with tears decking her eyes, and emotion enriching her voice, she talked so as to convince the utility of surrender at the Lord’s feet. She narrated a beautiful incident from the life of a devotee, Ma Sharda, whose adulation of Lord Krishna’s idol, breathed life into the “inanimate” idol of stone, which forced a doctor to convert from a non-believer to a believer. It does not matter, whether this incident was true or false; its utility lies in conveying that love and surrender are the pearls with which one can bargain for the Lord Himself.

Swamiji later spoke in a heroic way, narrating the story of Spartans, as they held their ground against the army of thousands. However, they were duped by one of their own who joined forces with their foes. This traitor was a man, handicapped, in such a wretched state that no one would like to eye; in nutshell, a miserable wretch – both morally and physically. The rival army offered immense wealth and other objects of sense pleasures to this man in return for divulging the secrets of the Spartans to them. Here, Swamiji questioned that if wealth and other objects of sense pleasure could be acquired even by a miserable wretch like that man, so what was the big deal in becoming rich, gaining a social standing, a wife and so on! And yet, we devote all our time to these pursuits only. It is high time that we rise above such base tendencies in ourselves, in order to get lasting peace and bliss.

And as the microphone was turned to Maharaj Ji, the atmosphere welcomed his words with rumbling thunderclouds and soon it began to pour down. The entire gathering was moved to the meditation hall. There everyone sat tight, in the limited space and Maharaj Ji began…

What is spiritual growth? To listen sounds and see lights in your head! Well, the real spiritual growth amounts to being able to live cheerfully and with glee abandon the Will – the Hukum. Hasn’t it been said, so emphatically,

Where was the message of Gita uttered? In some silent tapovan? No, it was uttered in a frightening battlefield, when the war conchs had blown, death was imminent. Obstacles, that appear so nerving to us, are but opportunities to evolve from man into a superman. That is spiritual wisdom, and it takes much growth of spirituality within oneself, to understand the import of Hukum and walk along its merry way. Let not the thunderstorms of the worldly afflictions, desire, praise and criticism unnerve us. Realize yourself as hand in hand with the Divine. That is our Nature. What a surprise! The king of kings has reduced himself to a begger, merely by thinking oneself to be so. The throne of perennial, unfathomable bliss awaits you. Obstacles and welcoming them as the love-laden slaps of the eternal Friend is the way to it attain it.

Maharaj Ji went on to illustrate these concepts with plentiful examples. Later, the current of the discourse shifted to the greatest surprise of the world! Yuddhisthra in the Mahabharata has said that the greatest surprise was that though everyone dies, yet we live as we ourselves would never die. Maharaj Ji said, there is an even bigger surprise, from the spiritual perspective: that though man is Divine himself, yet he has become miserable because of his conditioning – believing himself to be a physical body. Maharaj Ji said that one who is awakened in his true Self sees all external activity as a wondrous play. His inherent ecstasy mingled with the sorrow that he sees others plagued by, drives him into compassion. Maharaj Ji, like always, urged everyone gathered to perform their actions with full force and power and when failure strikes at their door, to utilize that as a means of going within. 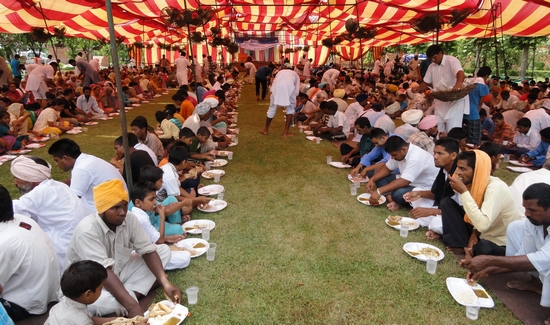 Devotees eating parsadam after the sabha

Thereafter, the sun shone again and everyone took prasadam. The devotees, who has come from near and far, started to pack up, and soon the ashram began to fall into its usual silent self. The devotees left with plentiful jaikaaras, inspired and buoyed to their core, to keep up onto the path of everlasting bliss.