3 July, The Lawns of Malke Ashram, Thousands of Devotees seated facing the stage of Guru Purnima: It was the day of Guru Purnima. Purnima stands for the day (night) of the full moon and this particular purnima is dedicated to the Guru. The day began early at 5:30 a.m. with devotees having coming from far and near, stood in queue, as each one awaited his turn to offer their feelings of love, gratitude and surrender at the feet of the Guru. This session went on till 8:00 a.m. 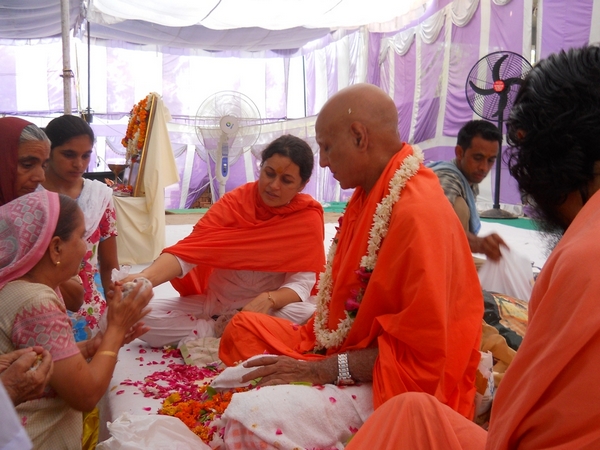 Thereafter, Maharaj Ji came back again near 10:30 a.m. and the main sabha was underaway. Numerous beautiful devotional songs, devoted to the Guru, were sung. Thereafter, Br. Guru Chaitanya, Sadhwi Yoganjali, Swami Suryendu Puri Ji shared their experiences and insights with the assembly. It was time now for Maharaj ji to speak. The important points are recollected and reproduced in bulleted form for ease in reading.