May 31, Malke. It was last Sunday of the month, day for monthly satsang at Shabad Surati Sangam Ashram. Seekers of truth gathered from all around with zeal for guidance on the eternal path and recognizing this, Swami Ji started his discourse asking them if they knew what truth is. Quoting scriptures, he told that truth means something that stays in every time—past, present and future. Every object of the world and the world itself is but fleeting. No wonder, our quest never meets an end in the world. Nevertheless, this world didn’t appear out of nothing but there is a source, which is real and eternal. This source can be approached from anywhere and everywhere because it is basis of everything. However, one has to find it within. Therefore, we must turn our mind and prana inwards to get the glimpse of this truth instead of chasing after the possessions and position in the world.

The only hindrance to our quest is body-consciousness i.e. identifying ourselves with the body. When we consider body to be our real identity, all the relations and possessions and limitations of the body catch hold of our life and happiness, which is our true nature, becomes a mirage. We try to find happiness in worldly achievements but nothing ever satisfies us being incomplete, impermanent and unconnected with our true nature. Whatever we do in the world but until we recognize our true nature and live accordingly, happiness would be an illusion. There is a very interesting story to understand this: 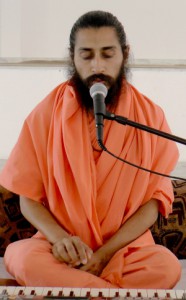 Lucknow, the city of nawabs is famous for its upper crust and their regal bearing. Even though the time of nawabs is long over, many follow apparently similar life style. There was one such ‘nawab’ who was very fond of sherwani (the long royal coat). Like most of the elite, he had a private tailor to stitch him clothes. Once he was invited to a wedding. He thought of stitching a new coat and hence visited his tailor. Incidentally, his tailor was not present at the shop and his son was looking after the business. He was utterly disappointed and wanted to return but the young shopkeeper was smart enough to persuade him for placing the order with him. However, there was a sort of conflict, as he demanded 6.5 meters of clothe while nawab sahib resisted saying he always got his sherwani stitched in 5.5 meters for last three decades. Anyhow, as the discussion heated up, nawab sahib asked for a chair troubled by his neck pain. Suddenly, this young fellow came up with a bizarre proposal. He stated that if nawab sahib brought him 6.5 meters of clothe then he can help him with his neck pain. Deal was indeed weird but somehow he managed to bag it. After a week, he called nawab sahib for fitting and handed over the sherwani to try. Somehow, nawab sahib didn’t turn up for long time. One fine day, after 3-4 weeks, he bumped into him in the market. After exchanging the greetings, he asked if the marriage party was good and if the sherwani was perfect fit. Having positive answer for both his questions, he further inquired about his pain. Nawab sahib told him enthusiastically that the pain was almost vanished, however, he considered it to be a divine grace as there was nothing done by him, apparently. The boy laughed and claimed that he did it all. He further explained to startled nawab sahib that his pain was caused due to the tight fitting of coat he always wore. He always supplied less clothe but owing to their old friendship, tailor master somehow managed to stitch a sherwani for him every time. But it was tight and wearing tight coat for long time induced the pain.

Nawab Sahib understood it at once but do we understand it? We have time for everything and everyone in the world but not for ourselves, to take care of our body and mind then how can we ever be happy? We have so many ifs and buts in life, so many limitations and dependencies, then how can we ever be content? To be happy, we must recognize limitations in our life and get over them, once and for all. Happiness lies in abundance but this world is so limited. We are son of God, the limitless being and therefore, we can never be completely happy in the world. To be happy, we must recognize our true nature and get established into it.