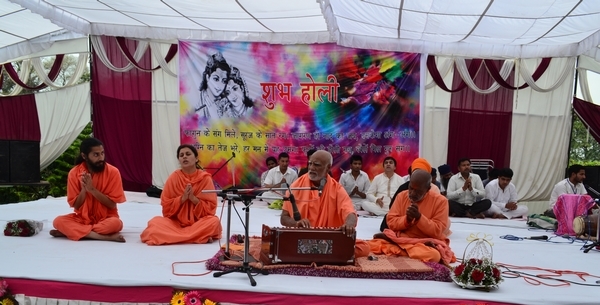 17th March, 2014: The suburbs of Chandigarh played host once again to the unique annual event of Holi with Flowers. To the local organizers of the event whose eyes were locked on the skies because of forecasted showers, Maharaj Ji simply said not to worry, for whatever would happen would be in our best interest and both sun and rain could be used as stepping stones to sadhana.  In any case, the clouds were only a passing scare or probably they were present too just like an audience to witness the celebration of Holi. On the eve of Holi, an Agni Kriya session was also held. 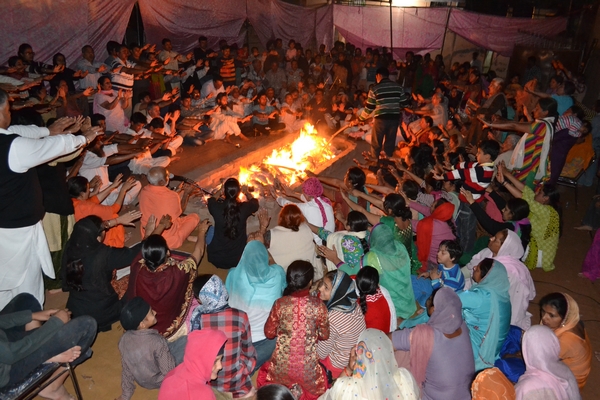 Agni Kriya on the eve of Holi at Naad Jagran Kendra, Maloya, Mohali.

The main event began by 10:00 in the morning of the 17th. The first phase included hymns, bhajans, quwalis, gurbani keertan. This merged into the second phase of discourses by Sadhwi Yoganjali Chaitanyaa Puri Ji, Swami Suryendu Puri Ji, and Maharaj Ji.

Maharaj Ji inspired all to take steps towards playing the kind of Holi celebrated by Prahlada, Lalleshwari and all saints and bhaktas. Maharaj Ji said that usually Holi is celebrated with colours and water. The nature of water is that it always flows downwards. And there is mixes with mud. But many people enjoy such a Holi filled with dirt and mud just as they enjoy some amount of “bad” tempered talk at home too. But flowers bloom at the apex of the stems. They spread fragrance. There is another kind of Holi that is played with fire. Such a Holi was played by Prahlada and Lalleshwari. 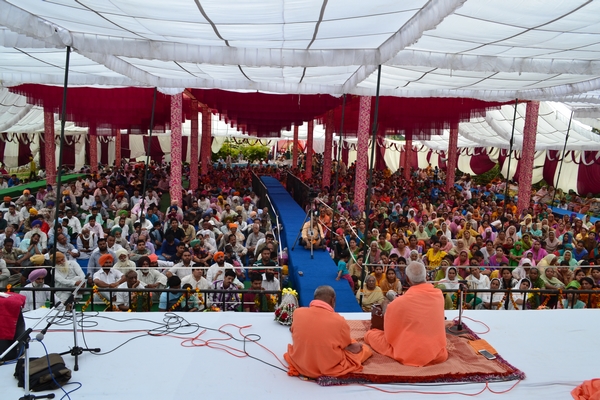 The sangat in the lovingly decorated pandala.

But before one reaches to that point one must make many preparations. One must go inside the body. Beneath all the knots and veils of the body and mind, a fiery flame is always burning in the sushumna. But we have to develop access to it. At this point Maharaj Ji narrated the words of Shri Ramakrishna Paramhansa who said that seeking of people is like they have a quarter litre of milk mixed with 39 liters of water. The firewood they have is also wet. And yet they come and complain why they cannot get khoa from it.  So the need is to first dry the firewood and the wetness before the fire can be lighted. 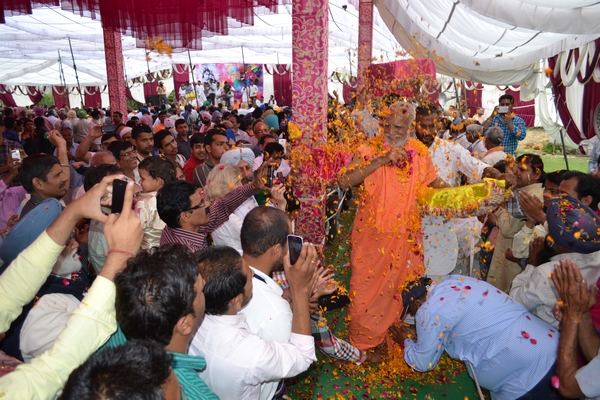 For this the following steps can be taken. First understand that the human body is divided into three sections: surrounding the navel, the heart and the center of the forehead. To purify these three regions the three pitfalls in human nature must be transformed. This means that anger must be changed to teja or brilliance, attachment to love, and greed to self-inquiry.

This too can be done if we just remember the following three sutras. First that I am not this body. Now one should not question too much about it. It can be taken in just on the basis of faith just like a little child innocently believes his mother telling him who his father is, who are his brother and sisters. Second, know that this journey has been ongoing from many births and one has left all the families of old behind. Similarly, understand about the present circumstances. And the third, celebrate Holi. 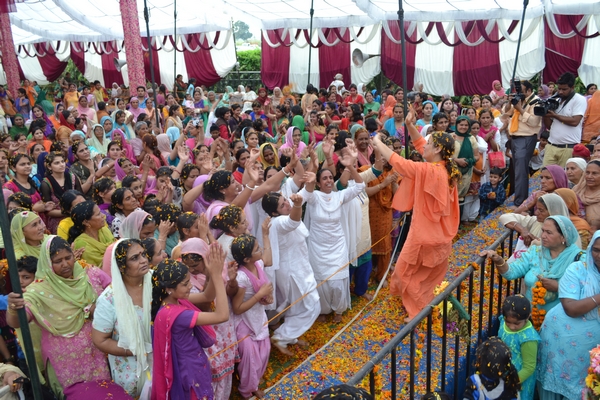 Lastly, there is no need to worry. Just like a long journey is accomplished with continuously taken  steps though they might be small, similarly, little but continuous efforts on this path will help cover the seemingly massive terrain to the goal.