Swamiji and Sadhwiji leading the celebrations of Holi on March 6 at Maloya, Chandigarh.

March 6, Maloya, Chandigarh: Time passes by. In the previous years, Swamiji and Sadhwiji were in the company of Shri Maharaj Ji when they came to celebrate the magnificent Holi of Flowers organized with great love by volunteers of Chandigarh. This time, though Shri Maharaj Ji could not be seen on the stage with physical eyes, and some people might have felt disappointed by this, however, no one could have known that even this Holi would turn out to be as grand and joyous as it is has always been. Surely, as devotees would say that though Maharaj Ji may have been absent physically, his blessing and grace were surely at function there. And like before, on the evening of March 5, Agni Kriya was also held at Naad Jagran Kendra – this time the session was led by Sadhwiji. Devi Anu, Raju and his group of musicians from Kila Raipur, Ram Rashpal from Chandigarh, Darshaa from Mallke all sang of love, colours and devotion to the guru, before Sadhwiji and Swamiji discoursed on the occasion. Some major points from their talks have been discussed below to be of use to those among us who could not make it physically, but we know the reader would have been present there in his heart. 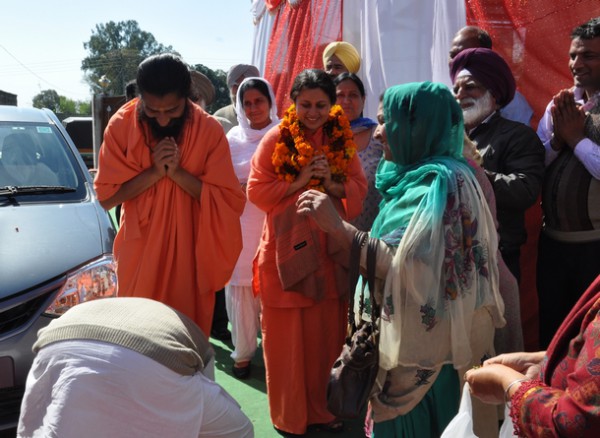 Sadhwiji and Swamiji being welcomed at the venue.

For much time now since Maharaj Ji went into total solitude, following the inauguration of the “Tripur Shiva Peetham”, Sadhwiji’s discourses have been quite emotional in nature. She has spoken on devotion to the guru with tears streaming from here eyes. This time, it was quite refreshing to see her begin her discourse with a beautiful smile, as she greeted the sangat and wished a very Happy Holi to all.

Sadhwiji began by saying that Holi is a festival of joy, of colour. And out of all colors the color red, has special significance. Gurbani is filled with references to the color red. In body, the color red signifies a state of health and in the mind, it signifies a state of bliss. But who gets imbued in this color? Those, who have earned the wealth of Naam. And Sadhwiji added that it was our great privilege to be associated with such a one who is totally imbued in the redness of Naam (referring to Shri Maharaj Ji).

Thereafter, Sadhwiji said that there are numerous paths to the Divine viz. karma, jnana, yoga etc. But she showed explicitly how devotion to the Guru forms the base of all these paths, and how in absence of it, none of these paths actually work. For example, on the path of karma, the nishkama karma that is advocated becomes a possibility only when one dissolves all ones preferences and wishes and works according to the will of the Guru. This is impossible until one love’s his guru. Similarly, she said that merely reading and accumulating knowledge does not lead to jnana. Jnana is reached when one hears the mysteries of shastras from the Guru himself. Only then the intellect is so purified that the Atman is reflected in it. And this is also true about the path of yoga.

So if we want to color ourselves in that color which is permanent, the pleasure of which is undying we have to meet the guru and play Holi with him. And she cited a moving example from the life of Sehjo Bai who answered her guru’s call and followed him, while she was being dressed as a bride. Her verses are imbued with indescribable devotion to the Guru. Quoting from Sukhmani Sahib, Sadhwiji said that this devotion is attained when one sells one’s mind to the guru.

She concluded her discourse with mention of Shri Maharaj Ji who too overcame great odds but still followed his Gurudeva. The reason he was able to do it was because he had nothing before his eyes except that grand purpose of life, which awakens after earning great merits through various lifetimes. 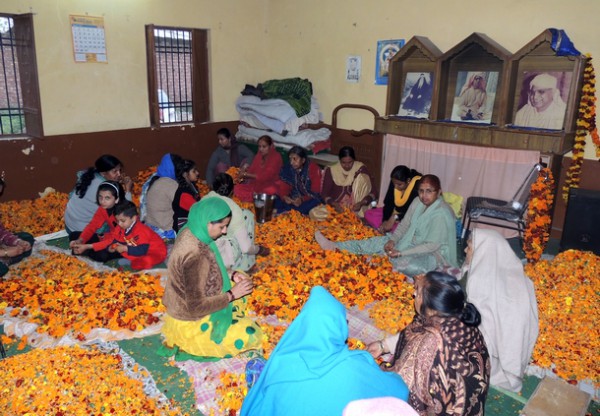 Preparations underway for the celebration of Holi with Flowers

It would be wrong to say that Swamiji discoursed. He simply talked. He conversed. And he talked straight from the heart. He wasn’t on the stage just to deliver a message, he actually meant to connect to the listeners. There were two beautiful proofs of this. One, before beginning his talk, knowing that the listeners had been sitting for a long time, he got all of them to their feet  and made them exercise a bit, after which everyone felt refreshed. Second, he saw that a foreigner was also present in the audience. It was just one person in a gathering of hundreds. Someone just concerned about his own message could have easily overlooked such a minor presence. But not Swamiji, and certainly not in the mood he was. He not only welcomed the stranger from stage, but also translated significant bits of his discourse into English just for his sake. His introductory congratulations of the festivity too were aired in different languages.

An incident had just occurred some moments back which had taken Swamiji into a flashback. A little child had offered him some flowers. This led Swamiji to peep into the past and ponder how when he had come to Maharaj Ji he knew nothing but had plenty of questions, and how on one occasion something had suddenly erupted inside him, which brought a new clarity and purpose to his life. One often wonders at the clarity that Swamiji has about life and knows that it is not earned easily. It is ripening of experiences spanning lifetimes. After sharing many intimate moments with the sangat describing incidents from his own life and how Maharaj Ji had made him his own, he ventured to describe the main problem in celebrating holi. She described the problem through an analogy.

If we have climbed on a wedding stage we would know that is impossible to look down ahead because of the flashlights glaring into the eyes. Similarly, as long as the flashlights of sensory objects, especially their attraction, shines in our eyes, it would be impossible to see the Divine behind all of them. Another powerful thing that Swamiji said was that if we will try to collect gur (jaggery) and gobar (cow dung), only gobar would remain. Therefore, when one walks this path but also desires and practices things antagonistic to it, what is left in his mind is a self-destructive mass of impurities and ego.

Also on the path of the spirit, one has to take the first step oneself. But the irony is that what to speak of grown-ups, we even corrupt little children with our ambitions. Swamiji mentioned that when any grown-up asks a child, “What would you become when you grow up?” – they are in effect asking how much wealth, name-fame would they earn when they grow-up? So it is always money in our minds.

Swamiji went on to talk about Naam and deekshaa, the gist of which is the same as has been discussed many times on these pages before. The spiritual journey does not begin before acquiring the gift of Naam from the Guru and the Naam is not just a cluster of words. If it were anyone could name their child, “Raam” and that would do the trick. No, in reality Naam is a very subtle stream of vibrations and is obtained from a being in whom it is awakened. Such a being is called a guru. 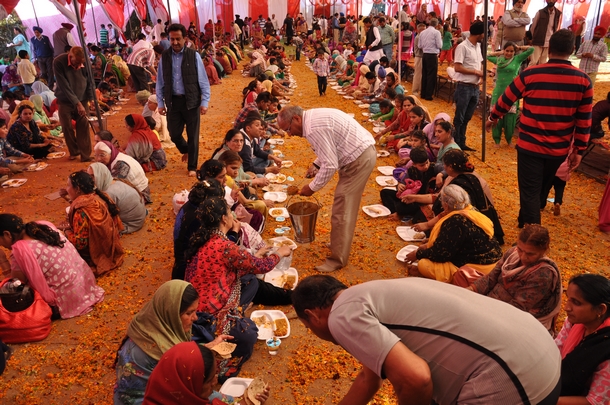 The Conclusion – Flowers and Prasaad! A fragrant delicacy!

For more pics of this event, please visit: www.facebook.com/groups/shabadsuratsangam/