How to worship your Guru 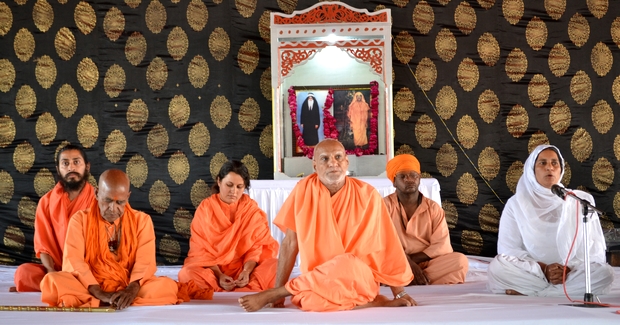 April 14, 2014. Devotees must be aware that Prabhu Kambli Wale assumed his physical body on the day of Vaisakhi (first day of Indian month ‘vaisakh’ that denotes the start of summer). Therefore, this day is celebrated with immense joy and fervor at Harisar Ashram in Kila Raipur. Bhajan-Keertan (hymn) are sung in praise of God and Guru to fill every heart with devotional love and prepare them to absorb the teachings conveyed subsequently through various discourses. Lastly, Sri Maharaj Ji takes everyone into realm of divine ecstasy through his words and hymns. The satsang later concludes with langar-prasad.

On this vaisakhi, Swami Suraj Puri Ji, Sadhwi Yoganjali Chaitanya Ji and Swami Suryendu Puri Ji delivered their homily and motivated the gathering to take the spiritual path more sincerely. Then, Sri Maharaj Ji started his discourse quoting Sri Guru Granth Sahib – vaisakh suhava ta lage, ja sant bhete har soye. This verse proclaims that vaisakh may become pleasant only if we take refuge in holy feet of saints and following their guidance, reach to God. Sri Maharaj Ji pronounced that Prabhu Kambli wale had assumed his physical body on this very day and performed miraculous deeds just to give pleasure to the devotees and save them from scorching heat of mortal world. Though, he was already united with God owing to his sadhna in earlier lives but to guide the devotees, he set an example of absolute devotion in Guru, full faith in God, unconditional love for others and selfless austere lifestyle. Similar to the resolve of God, to express his pleasure and power in numerous forms, Kambli Wale also expanded his consciousness to reach far and wide in hearts of so many devotees and filled it with ultimate power and pleasure.

To make it more clear, Maharaj Ji gave an analogy of a tree and a seed. As a full-grown tree produces seeds, which in turn give birth to so many new to-be trees once a farmer sows it in soil. Similarly, God created this whole world and its beings as potential seeds of divine. Guru, an evolved seed already manifested as tree and unified with the mother tree ‘God’, is the farmer who sows this divine seed (the being separated from God) in the fertile land of naam or mahavakya (Guru-Mantra). Eventually, it grows to recognize its divine nature following the path/practice told by Guru. The veil of ego dissolves in the soil of naam and the tree manifests. This makes the disciple, a carrier of Guru lineage and the cycle repeats. Therefore, on this beautiful occasion, we must remember that in form of naam, guru is in our heart and will always be there. All we need to do is to get closer through regular and sincere practice. 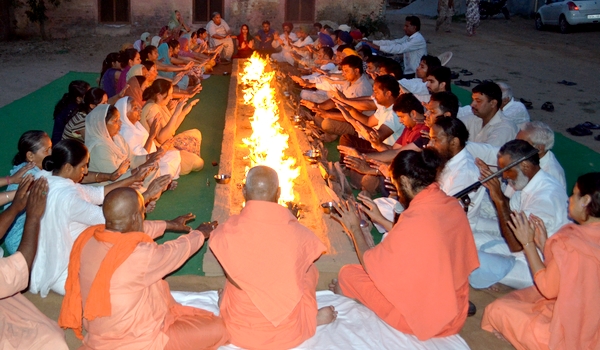 Agni Kriya being performed on the eve of Vaisakhi

With reference to nirvana of Kambli Wale, Maharaj Ji recalled an old saying- guru moya chela roya, dona ne bodh vyarth khoya. It means if guru considers his bodily death to be reality (worrying about his memorial or after-death ceremonies) and disciples shed tears over his departure, it means both of them didn’t understand the essence of life. The kingdom of spirituality is based on the fact- I am not this body. Scriptures assert that considering Guru as a mortal is a severe sin. An aspirant should recognize that Guru is his link to God as they both are unified but it is not possible for anyone to approach God directly without crushing his/her ego under the command of Guru.

Taking note of an announcement (of his retirement from board of trustees) made earlier he said that many devotees are worried that when this being will set out for mountains for solitary sadhna then what will happen to them. Well, all I can say is that for those who keep a distance in their heart, the gap may increase by leaps and bounds even if they live near to this body but those would surely come closer who may be living far away physically but keep no distance in their heart. So, time is approaching to take a big leap. Normally, we measure our each and every step and make sure where next step will be placed, but when we take a long jump, no one knows where the next step will fall. As long the jump, that much uncertain the placement of next step. However, without this leap, it is not possible to rise above the level we stand. 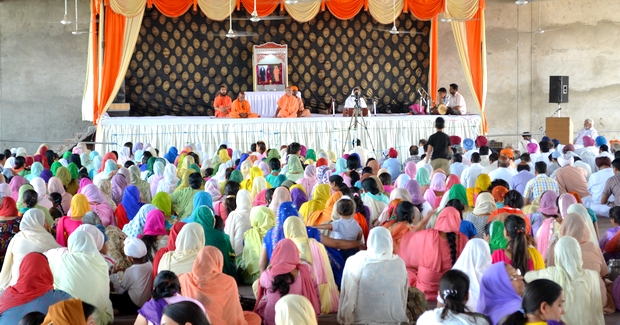 Nonetheless, there is no reason to be disappointed if one is not ready for this leap. There are ways for everyone. Guru-Mantra is a form of Guru so regular contemplation over it will surely help a devotee connect with Guru. Besides, great personalities leave some relics after them for the inspiration of naive devotees who could not rise above their bodies. Temples and memorials are build over these relics for the same purpose. Religious rites, worship, charity and service offered in these memorials help these devotees to connect with Guru as his/her energy is still available there through the relics. However, the worship must abide to the system suggested by scriptures and must not be decided by individual choice. As already discussed, we should not worship Guru as a mortal and provide objects or facilities required by an ordinary human. It should be clear in mind that the purpose of worship is to purify our body and mind and make it deserving of divine grace. For example, in summer if we really want to serve our Guru who has left his/her body then we need not install an air conditioner in the memorial as Guru has always been free from body-binding. We could rather swirl a manual fan with all our devotion. This will give us an opportunity to connect with Guru. There could be so many such instance. The basic idea is to serve the Guru not as an ordinary human but a divine power as it will open the path to our liberation.

The audio of complete discourse is available in Punjabi language here or can be downloaded here (right click and save).