Malke, 15-23 April: The grounds of Malke Ashram, the seat of stupendous inner research and experimentation by Maharaj ji, became base for a new experiment for 10 days: – the Body Shaping Camp. And well, as you might have guessed it, a body shaping camp in reality cannot be anything else than a total being-shaping-camp, and which is nothing but another Sadhana Shivir. And yet this was a new in many respects. From much time the devotees, those on the higher side of the waistline (and even those on the opposite extreme) were asking that something be done to help bring their bodies back in shape. And lo! the experiment was on. 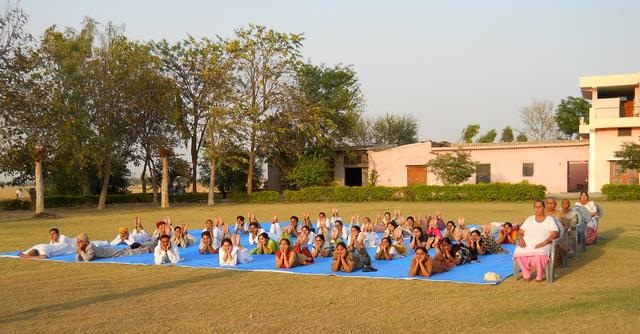 Bringing the body back into shape starts from bringing the mind back into shape so the integral part of this experiment were the daily myth-breaking, scientific lectures by Maharaj ji on topics like the non-correspondance between becoming thinner and eating less.The gist is in fact to first cleanse the body of unnecessary waste and re-light the fire within which usually smoulders with age.
On such a base the routine of the devotees was set. The day would begin with cleansing kriyas that help relieve the body of all waste. (Help was taken of lime+honey water combo for this). Then came the SSKYoga part. As the sun reached the zenith at midday, instead of retiring to the cool shade of their rooms, the aspirants would gather for powerful session of Agni Kriya Yoga that outlasted an hour’s duration.  Nothing solid was given to eat; what was given was supposed to be nourishing and yet cleansing at the same time. Hence the main diet comprised of juices, soups, lassi, sprouts, salad which were offered at various times of the day. Repeated inquiries were made whether anyone was hungry or felt weak, but never did the participants felt any such complaints. 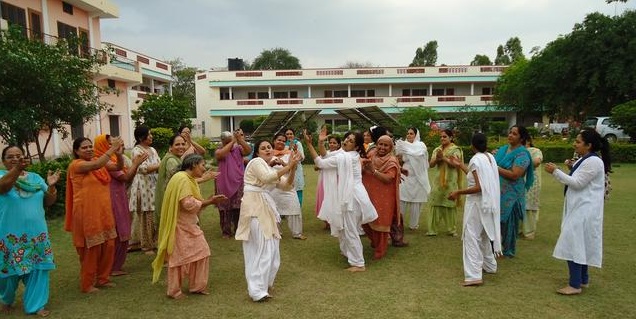 The evenings were total masti-packed. The participants danced along with their bellies :-)) and shared jokes and laughted their heart out. Everyone used their hands and feet and participated in various chores of service through the day.
Though initially it was difficult for to adjust, for our bodies become too weak and habituated to luxury living to home, but after the intial jolt the ride was fully of merriment and joy. A detailed report will be updated shortly on the website of the results obtained.