In the Memory of Devi Sarlaa

On 26th May Maharaj Ji reached Kila Raipur to commemorate the passing away of Mata Sarlaa – the lifelong devotee of Swami Dyalu Puri Ji. Maharaj Ji shed light on some tremendously inspiring instances from Mataji’s life. They are covered in the following synopsis of Maharaj Ji’s discourse.
Reminding all the purpose of having gathered, Maharaj Ji drew attention to death, and its place in our lives. With death, the body is left behind and all our relations and associations which exist because of the body also end.
While we are in the body we must be buoyed up to do the karma, doing which the human birth becomes successful. Otherwise, the cycle of birth-death, happiness-sorrow, victory-defeat will just go on and on. We are to ask and test ourselves whether, while living in the body, we are free from its clutches. For this there are tests. There are hints.
Maharaj Ji brought out these hints through the context of Mata Sarlaa’s life. The following instances were narrated: 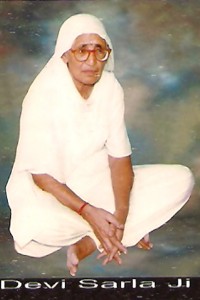 Sarlaa Mataa lived in the times when women were kept confined within the four walls of the house – Education wasn’t a thing for them. Freedom and doing their own will were things so alien that it hardly ever pricked their minds. In short, theirs was a life of silence, their welfare, desires etc. a matter of not their own concern but to be aligned in accord with the wishes of parents or those of  the husband. In such times, this brave lady wrote a saga of great determination.
By the time she entered her youth, it became clear to her that her life was to be wholly and solely devoted to God. There was no place of marriage in her life. One should not think that a householder’s life is bad, but for someone like Sarlaa it meant an unnecessary digression from her true yearning. She would leave her home to find God. Where such an undertaking wasn’t even common for men, for women such occurrences were rarer than the blue star. Naturally, her parents resisted. However, her determination was equally great. She resolved that she would go without water until her parents agreed to her wishes. Though she used to take buttermilk, but despite that, in the heat of Punjab, to go without water is quite troublesome. Her eyesight suffered. Yet she was up to her resolve. Ultimately, the parents yielded and the path was clear for Sarlaa to devote herself one-pointedly to God.
All of us have determination. The question is towards what things do we direct it. People may be very determined when it comes to taking revenge. The same force can be utilized on goals more holistic and rewarding. The great quality that an aspirant must strive to possess is dridhta or strength of will. Once this is obtained, other things are more or less straightened out.
The second quality that an aspirant ought also to possess is again brought out by the instance of Sarlaa Mata. It tells about the inner aspiration, the quality of one’s samskaras. Sarlaa Mata always talked about God, saints and sages, satsang whenever anyone came near her. Kambli Wale Maharaj used to say that even to inspire one person on this path is to reap the benefit of saving 100 cows from the butcher’s axe; to become the cause of failing of even one person is akin to the sin of killing a 100 cows. Sarlaa Mata, through her own sincerity towards her path, inspired many those who came into contact with her to follow (tread) this path. This is a quality that a good aspirant naturally possesses.
Having dwelled so for some time, Maharaj Ji moved to the issue of treating the body of the deceased – the various ceremonies performed, their import and science. An important point coming out from this is that the various rites are more important for this earth and the people that are left behind, rather than the one who has left the body.
There is the tradition of offering the body to the funeral pyre called agni sanskara. There are also the traditions of casting away the body in a river called Jala Samadhi, or digging it in the earth called Bhu-samadhi. Though we are aware of these, yet we may not know the reason or the science behind these rites. Which body must be burnt, which can be offered to waters, the earth etc.? Maharaj Ji explained it thus.
The human body is composed of five elements. The earth and water elements are predominant, especially in the realm of work and experience that we spend most of our time in. The sushumna or the central channel is predominant in the fire element. This does not mean that within it there is a golden flame that is always burning. But it refers to the current of vibrations that always keep on rising in the sushumna. Since it is the nature of fire to sublimate and lift, therefore that rising current is likened to the activity of the fire element. Similarly, in more subtle realms of the body, the air and the space elements predominate.
A being, who when yet alive, had not gained access to sushumna, or in other words, whose body was still not purified, it being predominant in the earth and water elements – that body is to be burnt in the funeral pyre. It is the nature of fire to purify. In this way all the impurities are burnt away.
For the yogi who is totally established in the sushumna, the rigidity of whose body has been destroyed when yet alive, his body can be offered to the waters or the earth. For it will have the power to sanctify and purify the earth and the beings inhabiting it. Even if it is offered to fire, there is no harm. At a very advanced stage, a yogi in whom both amrita and fire were fully active, when his body is burnt – little crystals, very hard in composition, are left in the ashes. Such has been said to have occurred with the body of the great Buddha.
Elaborating on these more or less unheard topics, Maharaj Ji concluded by saying that Sarlaa Mata has left her body. It is a sign that we too will not be staying here for all time to come. Our turn would also come. It is better to prepare for what we must pass through.
The idea is to be sincere in our yearning for God. Let us not fool anyone. Let us not keep curtains between ourselves and God, ourselves and Guru. But this is only possible if first we are true and sincere with ourselves. Let us not at least fool ourselves.
It never befits an aspirant to think that I cannot walk on this path. To think that this path is only meant for great souls is a pretence under which we hide our own weakness.