Swami Suryendu Puri Ji speaking, in the company of various yogacharyas, during the Inaugural address of the International Yoga Festival, 2015 organized by the Govt. of Uttarakhand, at Rishikesh from March 1-7. Click here to listen to the discourse.

International Yoga Festival, March 1-7, Rishikesh: The town of Rishikesh has emerged as a center of spiritual tourism in recent times. The government of Uttarakhand has ventured in conducting its own Yoga Festival there since past three years. This effort does serves to boost the economy but far more importantly, even in a very modern commercial setup – far removed from the silent caverns and hermitages with which Yoga is originally associated – it provides a platform for modern seekers to explore the field of yoga. Times have certainly moved on. Today it is common to see ochre-robed men and women as active entrepreneurs, organizers, with smartphones in hand. For those accustomed to the traditional picture of a saint, a yogi, such changes are still bitter to gulp and the modern ‘saints’ are therefore eyed with much skepticism. But a gentler and contemporary eye knows that the spiritual is not to be bound in anything, just as Kabir Ji said, “When meeting a saint do not inquire about his caste but seek the wisdom that he posseses, just like you ought to consider the merit of the sword and not its encasement.”

Swami Suryendu Puri Ji conducting his daily morning session of Surya Kriya Yoga in a breathtaking setting, by the banks of the Ganges.

So to seekers ventures like IYF 2015 are beautiful opportunities of exploration. Swami Suryendu Puri Ji was also present at Rishikesh from March 1-5. Every morning he shared Surya Kriya there in a beautiful setting – on the banks of the Ganges with the river glittering beautifully in the morning sun. Swamiji also lectured on March 5 in the Main Hall. His talk was very well received. The bulk of the audience consisted of young students of yoga. These days it has become a trend to become “yogacharyas”, without going deeply into the subject first. It has become a trend to preach about mysteries of shastras without caring whether those truths are also reflected in oneself. Swamiji touched on these issues with truth, sincerity and a mighty force, which captured everyone’s attention. Swamiji’s speaking without any prior preparation touched those issues which everyone knows intuitively, but probably many of us lack the force and intelligence to air them cogently. He did that and for doing so many responsible personalities from the field of yoga, present in the audience, showed him much gratitude. Students hung around Swamiji for a long time – partly pulled by the strength of his speech but mostly by the love they received from him. 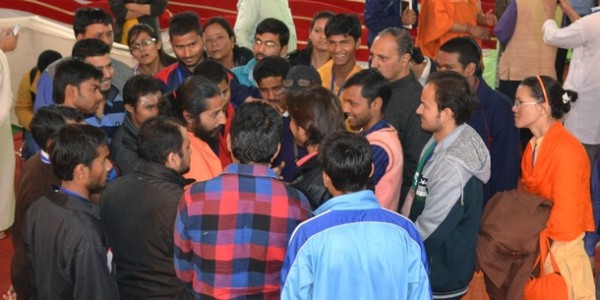 Swamiji’s lecture at the Main Hall on March 5 made a sound impression on the minds of the audience, especially students. Seen above are some yoga students conversing freely with Swamiji after his talk.

Plenty was happening everyday at Ganga Resorts (the site of IYF 2015). Among others, there were enlightening talks by Dr. Nagendra of Svyasa, Mr. O.P. Tiwari of Kaivalyadhaam, Taoist Master Mantak Chia – all of which were also attended by Swamiji. It is up to each participant to remember the example of the ant at such festivals, that gathers the sugar and leaves the rest.