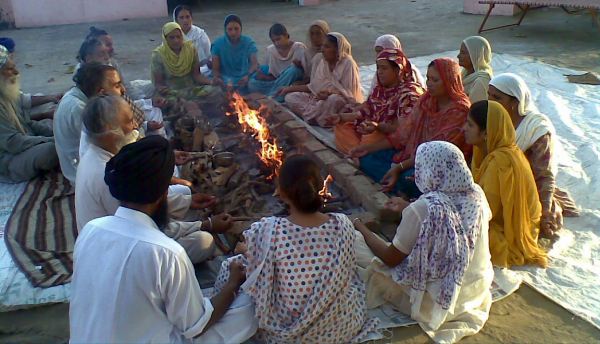 September 27, Jatana. Its after a long long time that Jatana is enchanted once again. In the beginning of this year, the small ashram situated there was renovated. Though, a satsang was conducted there in the divine presence of Maharaj Ji some time ago still a need was being felt to charge up the devottees and the atmosphere once again. Considering this need and persistent request from all the devottees from Jatana, Brahmachari Dhruv Ji was sent there last month. He stayed there for almost a fortnight and conducted Surya Kriya (Sun Meditation) & Agni Kriya (Fire Meditation) on regular basis. Many people had been benefitted by this. Now Sadhwi Yoganjali Chaitanya has takenthe charge and accompanied by Reena & Harpreet she is living in Jatana Cottage these days. There days start early in the morning with a mass meditation from 5 to 7 followed by Surya Kriya. In the afternoon they read and explain ‘Chingar To Brahma Jot’ (the spiritual encyclopedia created by Maharaj Ji) to everyone. In the evening again Surya Kriya is performed followed by Agni Kriya if time permits. But this is not all, during remaining hours many people visit them for healing or to learn meditationetc. Overall, Jatana is having a memorable time these days.