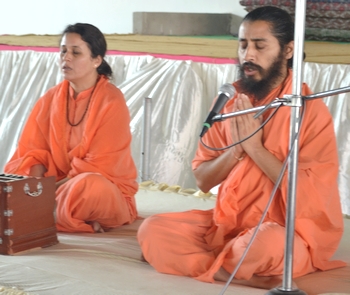 Oct 17, Harisar Ashram, Kila Raipur: Please follow the link to listen or download Swamiji’s message, given on the occasion of Katak Sangrand at Kila Raipur Ashram. In this discourse, Swamiji highlights the fact that more often than not we attend satsangas just like machines, for we are unaware of their significance and are just obliging a duty that must be done. Swamiji illustrates this through a beautiful Sheikh Raunaki Ram anecdote of the two gardeners – one who digs a hole and the other who simply refills it again; and both of them think that they have done their duty very well. However, none of them bothers to carry out the intermediate step of planting a seedling in that hole – which apparently was the duty of another gardener who was on leave that day. This is how we attend satsanga also. We don’t know what we are doing or why we are doing it. And that is also the prime reason why even during the course of a satsang, our minds roam here and there, to the extent that some just can’t help it and have to start chit-chatting among themselves. If this is indeed so, we are just deluding ourselves in the name of satsanga.

But no one should understand this to mean, that if the mind wanders here and there during the course of a satsang, then what is the use of going there, and hence stop coming altogether. That is not what is meant. Usually, people make this mistake. We even try to play smart with the concept of guru-agya. Many people come to Maharaj Ji to just put his stamp on something that they had already decided in their minds to pursue, but still ask, “Maharaj Ji, should we do it?”

Swamiji highlighted the fact that many people call up and say that they will only attend the Advance Sadhana Camps. But in truth, it is just ego-talk. Even on this path, they are competing against others, and want to show that they are more advanced than others. They are not  so much interested in what actually will happen in the camp, but want to attend it becasue of the prefix “Advance”.

All those who have walked this path have done so by dissolving themselves in Guru’s hukum, guru’s love. That is the only way. That “I will do sadhana” – this much ego is needed; but that is all that is needed of it. Beyond this, ego has no further role to play. Everything is conducted in the light of guru agya.

Don’t make the mistake of using the guru just as a stamp of approval on your wishes/desires. Rather, transform yourself according to the guru’s mind. This does not mean renouncing everything and becoming a sadhu. But making sadhana your goal. And it should be clear that doing some kriyas is not what sadhana really is. Unless the seed of guru agya is sown, what would only kriyas do? Without seed, the tree cannot grow. Just think, Swami Dyalu Puri Ji served; Maharaj Shri too just served continuously for 9-10 years. Through seva, coupled with simran, everything happens.