Know Where You Stand; Start from Service

16th November, 2012: It was the first day of the month of Maghar. The monthly sabha was organized at Harisar Ashram, Kila Raipur, as is the custom. In the retrospect, it was a return to absolute basics. Below we present the crux of the matter – as addressed by Swami Buddh Puri Ji in his discourse (Note: The account is not verbatim but intends to capture the spirit of the talk. (Please click here to listen or download this discourse in punjabi.).

We practice and want to practice too. And yet, often the will to practice, its intensity decreases, the heart remains engrossed with worldly attractions and consequently impurities and the light of the Lord within doesn’t shine in all its splendor. Well, there are reasons for this. What are they? Let’s understand them. 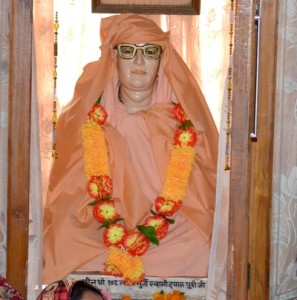 One of the big reasons is that we take Guru-Naam (guru-mantra initiation) and think that the work is more or less done. It is like we got the Visa, but never really boarded the plane. Maharaj Ji (Swami Dyalu Puri Ji) used to say that this Naam that has been given to you, is such a treasure, but you will only come to know of it, when you unravel it for yourself. Even when we practice, the practice remains incomplete. Why is that? Because we have not started the journey from where we are! We are sitting in a room in India and imagine that we are flying abroad. Surely we will not reach the destination in this way. We are living enslaved in the body, our mind is totally engrossed by the sensory world, and we imagine many things, even think that we have become yoked to the Guru, the Lord. But this is all in our imagination.

For real growth, therefore, the sages have built these steps – to proceed from where we are today, to the goal. The three milestones are the following:

Let us note that this Self Contemplation is not a logical, intellectual reasoning, as it is usually but wrongly understood. It happens only when the meaning of Naam (guru-mantra) awakens within. It is not a thought process, arising from a study of scriptures. When you say, I am not the body, not the mind, it is actually the very mind saying this. This is no Self contemplation. That’s all for it. Let us now turn to the matter of importance to us. 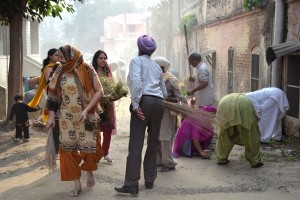 We are to start with seva or service. Together with this goes japa-tapa-dhayan. One whose mind is engrossed outside, whose body is ill, diseased etc. should start from seva. He should focus more on service. This does not mean that he is to neglect simran. This doesn’t mean that we are to give up the practice of Naam for that is the passport without which we can’t even travel, but we are to start our journey from where we are – and we are in the realm of the body, our mind enslaved in the sensory world.

It should happen, be that through seva, the mind should go within. Service is to be done until the last breath. Yes, it may happen that we picked up a broom to do the cleaning and the consciousness soared within and the broom dropped. That is remarkable but not usual!

We are doing works all the time. But they are not service. What is the difference? It could be great but any work becomes service only when God is the goal. Usually the works that we do at home are not done in the spirit of the service. This can be understood as follows. When we did not have money we did all our chores ourselves. But when we became rich, we got others to do them for us. Now, it got beneath our status to do those ‘menial’ tasks ourselves. This only means that all the while, even when we were doing them ourselves, we were not doing them in the spirit of service. 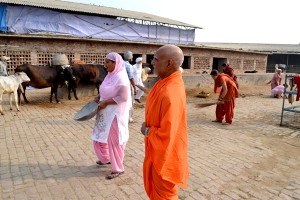 Maharaj Ji at the Seva Session

Now in ashrams etc. as one makes progress on the path, he should be engrossed in seva all the more. That is because his progress implies his ego is being purified and he is becoming more of a sevak. Yes, to oversee an act of service is also another service, but if some leader feels it beneath himself/herself to get down to carry out the menial of tasks himself, especially in front of one’s students, then only ego has grown, it has certainly not been purified. Just like when we became rich we got others to do our work, when we become egotistical – that we have become great meditators, we begin to give orders to others.

What we are saying is that through service, by the act itself, the mind has become so pure that it begins to go within. The example of Udaalaka is immortal in this regard. He lived in his Guru’s ashram at the time of Mahabharata. One day, it was raining and Guruji asked him to go and check if the dam they had built for the field was fine, so that the field would fill with water. Udaalaka saw that it was broken at one place. He started putting mud, but the flow of water would not allow any of it to stand. Ultimately, not knowing any better way, he just lied down himself in the spot to stop the water. Finally when it was evening and seeing Udaalaka had not returned, Guruji and some disciples went in search of him. Guruji called out his name. Udaalake replied from where he was lying down. Seeing him lying there, Guruji blessed him and asked him to stand up. He stood up.

The issue is not about stopping water or doing a specific work. It is about purifying the ego in the commands of the Guru. Then japa-dhayana happen all by themselves.  Yes, it is very rare to get direct commands from the Guru. Until that happens, search yourself where services are needed. And as you go about serving, it is important that in the mind go on with simran. Service and simran should mingle into each other.

When this ashram was being built (the ground was being leveled), the great souls here did what is an inspiration to anyone on the path. For many days and nights they did not sleep but went on carrying piles of mud on their shoulders from here to the site. And we tire in half an hour of work. It is only when the body has begun to tire that the service begins and the path to go within opens up.

Once in Benaras, while Maharaj Ji (Swami Dyalu Puri Ji) were there, it was found the latrines had to be cleaned. The Brahmans were not ready to do it. Maharaj Ji himself picked up a broom and water and started to clean. Then all followed suit. So what is there to shy about it. Let us not say, he was a great soul and what are we! If we call him our Guru then we are to follow. We are to serve as well.

If we directly seek to start with self-contemplation, we may waste our efforts. Know where you stand. We are enslaved in the body, in the senses, our mind is outward drawn, so start with service. But yoke it with simran!

If we want that the sages should take our hands in theirs, fill your hands with service. If you want that your feet and legs may never waver on this path, saturate them with service. Go on increasing your avenues of service at home, in the neighborhood etc. Keep simran in your mind and with gratitude towards the one who has given you the chance to serve. Service is not meant to do good to anyone. It is meant to bring our mind home, within. 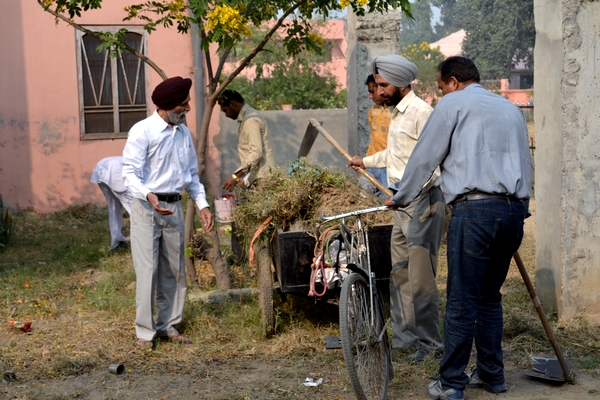 May we all fill our hands, feet, mind, body, intellect with the works and thoughts of Seva. May we take this first important step.