25 August, Shabad Surat Sangam Ashram, Malke: The following was the main question addressed in this month’s discourse. (Note for new readers: Every last Sunday of the month a gathering is held at the Malke Ashram where aspirants visit and put questions of practical interest on the spiritual path. Maharaj Ji uses the questions to build a general theme for the discourse also answering the questions in the process):

Who am I? What is my true Nature? We listen to scriptures and even appreciate what is written there, but what is the way to experience these truths and what should we do to always remember consciously what we learn from the scriptures?

Transcription of the Ensuing Discourse (Not Verbatim)

We have heard of the following incident that occurred in some village. A Minister was scheduled to visit this village with his entire retinue. The villagers sought it as a good opportunity to put their demands before the minister. But who would be valiant one amongst the simple, unlettered village folks to actually air their demands? One man stepped forward and said he would prepare a list of their demands and put them across in the welcome address on the day of the rally. So it was decided. Now this was the first time this man was to speak before the public, so he thought he would better rehearse. So for the entire week, preceding the D-day, he would go out to the fields and imagine the crop of cabbages there to be mass of people and rehearse. Finally the day arrived. The minister arrived. As is the custom, he arrived with his great throng of local bureaucrats and other leaders. A huge multitude of people from nearby regions also arrived. The man climbed on the dice to welcome the minister and put forward the demands. His eyes ran through the sea of people, unknown, distant. His village friends were a minuscule minority in the audience. There were big shots, leaders, powerful and authoritative in their formal gear. His throat went dry. Finally, he began, “Well, cabbages are cabbages and people are people. We welcome the minister. The honorable minister knows all. What can we tell him! He knows what we need.” And he stopped and climbed down.

This actually happens. We have heard it again and again that “I am not this body; I am a part of the Divine”. But when we are cornered by adversity we forget all about it. It is like someone goes training for combat. During the course of training the targets are stationary. But in the real war the targets are not stationary and what more, they even shoot back.

We have read truths in the scriptures. The scriptures are like a mirror. When the water is silent then one can see the face clearly. But if there are waves in it then we cannot. And if there are crocodiles too then one will not even dare come close to the waters. It is fine to study scriptures and understand them, but what to do when real adversity strikes?

The answer is present in the Gita and the example cited is that of the tortoise. When in danger the tortoise simply goes into its hard shell. So when adversity strikes take your indriyas (senses), prana, mind and intellect inside. But only he can do so, who has some empty space inside. The tortoise alone can do it amongst the numerous animals because there is a cavity where he can draw in the vulnerable parts of its body. Our jadata (rigidity) prevents us from going inside. We will have to create space. When this has been done, then one will not react in adversity, but simply go inside.

So, there are two levels. One level is that when favourable circumstances exist. When the sun is shining nice and bright, at that time, study, practice, do seva. But the important thing is do simran in seva. This one has to do. If one only practices at one time through the course of the day then one cannot face adversity. The main thing is whatever you studied and understood and practiced with closed eyes that should also continue during the course of seva, or as you work through the day. How will it happen?

The answer is “Saas saas simro gobind”. With every breath one is to practice the Naam (Gurumantra). But during the course of the day the practice to be done is saas-graas. If even while walking, talking and doing any other work, the motion of breath is a little towards the inside, then simran will happen automatically, works will go on accomplishing themselves. The breath should be drawn from the navel. This is a practical course that can be tried.  While doing anything, breathe from the navel. First this needs to be accomplished in the actual practice session. When we speak, note that the belly is constricted. But keep it relaxed. While walking, the hands and feet should move like the pendulum of a clock, their motions regulated by the breath focused through the navel. Keep it relaxed. Your bathing time should become a meditation, a breathing session. While you are talking to others you cannot chant. Real simran happens only when the breathing is deep, and you talk with great love to whosoever you may be talking. This is possible when breathing is deep and the mind goes inside. In anger the breath is outwards. The speech in this way will become deep, powerful, sweet, and wise.

But even after doing all this practice adversity may strike. In that case, pull yourself inwards like a tortoise. 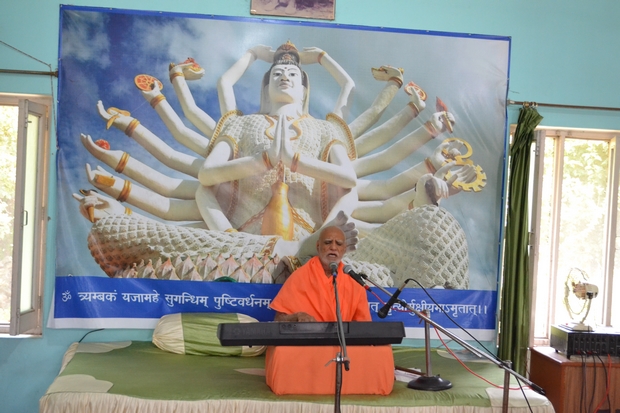 Then one will begin to realize “Who am I?” Right now we have only heard its answer, through the ears, though the extrovert mind, from some “other” source. All of this is still superficial. If it can happen that through seva and simran, a state comes, when all senses come to rest, if you can “chant” the guru-vakya there, the consciousness finds the path to go very deep inside. And once one is established there and acts from there, then no adversity can strike.

So there are levels. If you can practice in seva also then you will not flounder. In adversity you can become a tortoise. And there are even further levels, as the one just described. Then onwards this remembrance will always be there that “I am not this body” etc. But right now you will have to keep this remembrance consciously, for in failing to do so there is a good possibility of stagnating on the path.

There is a testing ground for real practitioners. When the simran works on deeper levels, in that state the very roots of five thieves (kama, krodha, lobha, moha, ahankaar) will be taken out. Right now the cleaning is only superficial. When anything is pulled right from its roots, the earth is also shaken. It is quite comfortable to go on pruning the leaves. But when the roots are struck, the body is shaken. This has been well described by Saint Jnaneshwar. This also occurred quite powerfully in the sadhana of Kali Kambli Wale. But once the roots are pulled out, once the storm has been withered, the bright sun shines forth clearly.

If we go on doing as above, then “things” will happen in the body. Do not become afraid. Keep the goal ahead. If you feel anything strange and too engulfing, remember not to severe your link with deepness in breathing. Then though tornadoes will rumble, but it will also be followed by a final calm and bliss.

Do not think it is too difficult. It is possible for a little seed to look at the fully grown tree and become dwarfed by its magnificence. But the seed is the part of the tree. In time it is destined to become the tree itself. So are indeed we, the part and parcel of Divine. If you will not sever you link and do not forget that “I am your part, or servant” then it is only a matter of time before the seed germinates and the tree manifests. But if we forget this then it will be difficult. It is does not matter that today I may not know my real nature, but just keep this nischaya (resolve) with you. When the buddhi vritti has been sowed in the guru-vaakyaa, a time will come when it will happen. And that is the state which fulfills our birth.