London is going to dream an early return…

Nov. 14, A dream came true for devotees in London after many-many years when Maharaj Ji landed there and blessed them all with his warm love and great care. It inspired them so much that they found it very difficult to let this dream fade or cease. But as it is said intently flowing water and growing yogi cannot be stopped, time of physical departure from London arrived a little too soon. Eyes were full of tears and trembling lips were sealed with fear yet the heart was pounding with great joy and cheer having the deep sense of his kindness and care. Hence instead of worrying they positively started with another dream of his early return…

For last three weeks the life in London had changed radically. Mornings were now filled with energy and joy as Swami Sureyndu Puri and Sadhwi Yoganjali Chaitanya shared Maharaj Ji’s innovative practices such as Sanjivani Kirya and more with the devotees here almost every morning. It was really amazing for the people here to learn that almost every person breaths incomplete or incorrect and this is why the lack the health and vigor in first place. In addition they found that there sitting and standing postures were flawed which caused them various pain and fatigue. 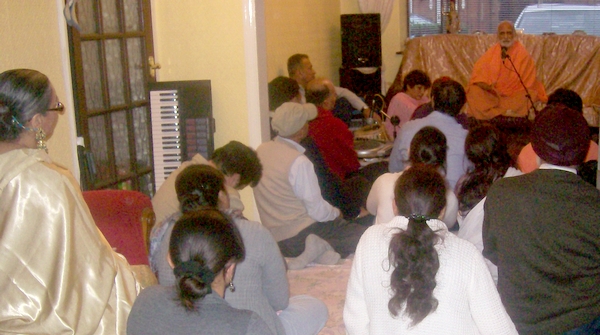 Daytime were devoted for some fruitful and useful discussions or satsang where fundamental issues were discussed to give way to a healthy, happy and harmonious life. Many aspirants met Maharaj Ji for the first time and his simple yet profound logic based on scriptural knowledge and scientific evidences convinced them to the core of their heart. Many obvious and oblivious questions were answered sometime when asked explicitly and sometimes even without asking. 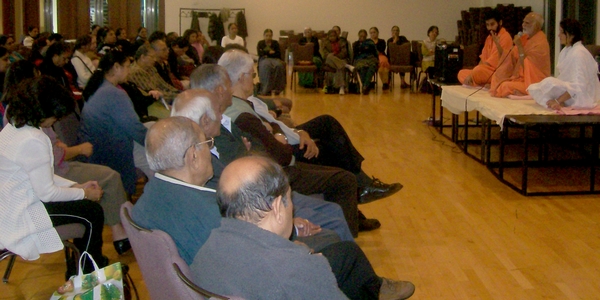 A Yoga practitioner and instructor Manisha organized a workshop for elderly people at Navjiwan Vadil Center. Where basics of breathing and chanting were discussed and also practiced. Later Maharaj Ji discussed the science of death and the spiritual aspect of it which will relieve us from its clutches once and for all. After completion of the session secretary of the society Jayanti Bhai expressed his extreme joy and requested more sessions. He told that it is for the first time in the five years that they had pin drop silence throughout the discourse and none left before it was over. Moreover, he was equally amazed alike his fellows there by the simplicity and feasibility of Maharaj Ji’s innovations and ideas. 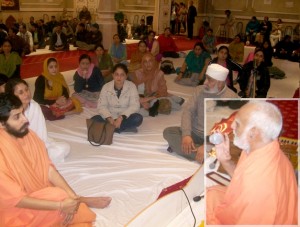 Amarajit Bhamra Ji who fell in love with Maharaj Ji and his teaching in the very first encounter played a crucial role in organizing various events at temples and religious institutions. The satsang at Ram Mandir and Vishwa Hindu Mandir of Southall were also amongst them. Here Maharaj Ji discussed the basics of spirituality in foreign land a talk at Vishva Hindu Mandir Southalland how to grow upon them. The temple over here are a bit different from the ones in India and even Canada. They have a different atmosphere altogether. Still one thing is similar that even here they have Kathas and Chauki etc. but rarely such talks and practices. All of them appreciated and admired the practicability and simplicity of Maharaj ji’s teaching. They all are now looking forward to conduct some session for Agni Kriya or Surya Kriya as well in coming summer. 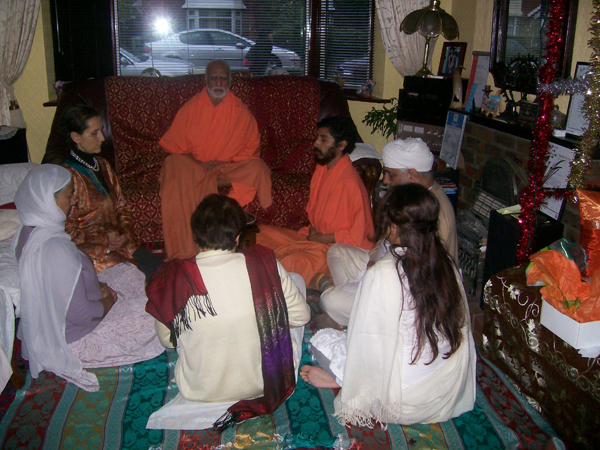 Many aspirants approached to overcome the first obstacle on spiritual path in form of disease. And Maharaj Ji guided them in meditative techniques and suitable Kriya-Yog practices. As the time of departure was approaching more and more people came to learn about Maharaj Ji and his teaching and time seemed so less to cater to all their needs and aspiration. The days became more and more busy with passing time and gatherings became big and bigger. Everyone was seeking a promise from him to schedule another visit soon or granting them with an opportunity to visit ashram and participate in sadhna camps there. 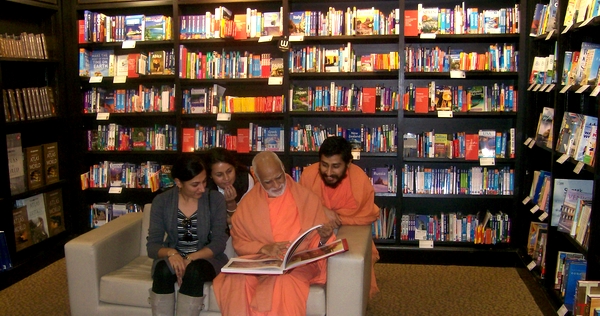 The Books are the best friends, guide, companion and best pastime too

Amongst all the hustle-bustle some time was snatched on the day of departure to visit book shops and find some drops of divine nectar in English land. 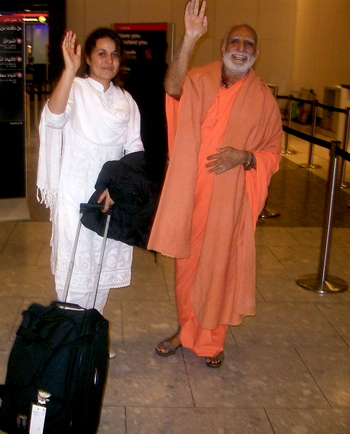 Waving the feel of parting away with a thunderous smile.

Finally it was time to bid good-bye and to learn that he doesn’t exist only at physical level but at all the levels all the time. And to realize the fact that at the subtle he is present all the time just if we could turn our senses and mind inwards, Maharaj Ji boarded the flight to Delhi along with Sadhwi Ji. But before leaving he announced very clearly that those who can find him in heart can find him in reality too. He also inspired them to learn the family value and recognize their cultural and spiritual heritage. For this he stressed on three things- 1. Language, all our children must learn to read and write their mother toungue. 2. Food, the food from motherland should not be forgotten. 3. Dressing, whenever one gets some free time they must put on their cultural dressings as these all things affect their personality at deep levels. Swami Suryendu Puri stayed back to further visit Italy and Greece and spread the fragrance of his knowledge to all those who are aspiring and deserving. He is going to return to India by 26th of this month just before the monthly gathering on last sunday of this month.