Mar 15-16, Delhi. Prabhu Kambli Wale often used to say, “Guiding a person on spiritual path is a virtue as great as saving 100 cows from being slaughtered while distracting someone away from spirituality is a sin of equal intensity.” Inspired by these words it seems, Mamta Sharma motivated her neighbors at Lovely Home Apartments in Dwarka to learn Surya Kriya and Sanjivani Kriya as it could bring them spiritual awareness in addition to physical health and mental strength. Learning her good intentions Swami Suryendu Puri agreed to spend a couple of days there before going to Bhilwara for Surya Kriya camp. Sadhwi Yoganjali also accompanied him considering the fact that majority of candidates were supposed to be female there. An evening session was organized for Sanjivani Kriya in which people participated enthusiastically. It came to them as a great surprise that even after practicing different form of yoga and pranayama for many years there breathing was still shallow and incomplete. Swami Ji explained to them in great detail the reason for this deficit and the ways to tackle it. Later Sadhwi Ji guided them in Sanjivani Kriya and helped them in correcting their breathing by personally observing every single participant.

After learning the secret science of breathing in theory as well as in practice they were inspired to learn more. Therefore, secrets of Surya Kriya were revealed to them. Just a brief introduction inspired them so much that they couldn’t wait to arrange a session for Surya Kriya as well. Instantly they planned and arranged Surya Kriya for the next morning in a nearby park. And once they were in Sun, the whole world was forgotten. None of them were willing to pursue their mundane activity leaving the bliss, Sun had brought to them. With a resolution to maintain this connection with the life and the Sun, they all requested for more sessions as soon as possible. 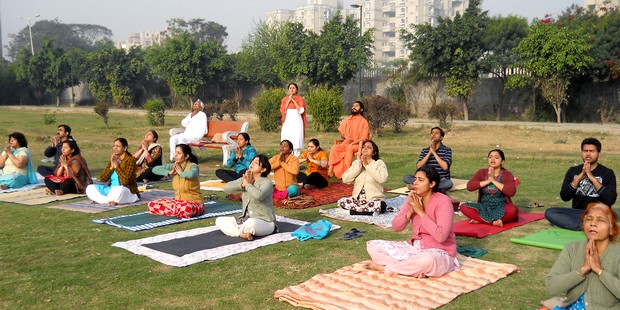