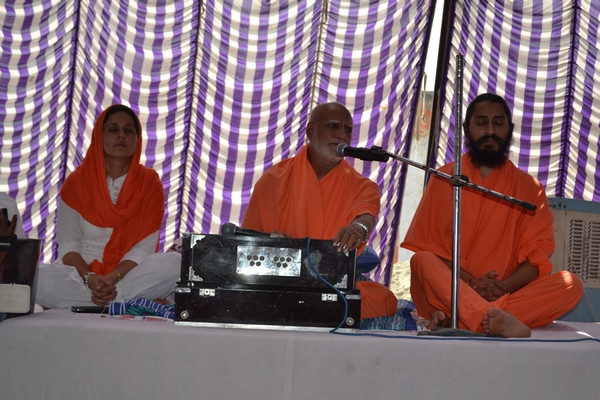 Aug 28, Bhuccho Mandi, Bhatinda: “The sign of good people is that they enter every new avenue with the thought of God in their minds”, is how Swami Suryendu Puri Ji acknowledged the invitation of devotee Nandi and his family, on reaching Bhuccho Mandi, near Bhatinda. The occasion marked the inauguration of the hosts’ new shop. It was only after repeated requests by the hosts that Maharaj Ji made a rare exception in his travelling schedule as he started uncharacteristically early, around 8 a.m. from the ashram, accompanied by a small group.

Nandi Ji and family knew that Maharaj Ji was visiting Bhuccho Mandi after more than 10 years and they desired that this glorious opportunity be made use of by as many people as possible. So along with the DSP, Bhatinda and other distinguished personalities, many new faces comprised the gathering. Why not? The hosts had gone personally to invite their acquaintances to the satsanga. But, in retrospect it seemed as if they had underestimated their efforts. The pandala in the end fell too small to accommodate all who had thronged to the occasion.

After sweet and melodious keertan by the Mattewara jatha of devotee Vijay, who had arrived overnight in acknowledgment of love-imbued requests of Nandi, Nandi introduced Maharaj Ji, Swami Ji and Sadhvi Ji to the gathering, which included many first-timers. He also spoke about the under-construction Tripur Shivaa Peetham about being a sacred shrine being only one of its kind in the world. Thereafter, Swami Suryendu Puri Ji addressed his listeners, first airing to them their own unexpressed problems, following with practical solutions. One of his remarks that left a strong impression was to start every new activity with the remembrance of the Lord. In this and numerous other ways he prepared the audience to grasp the ensuing discourse of Maharaj Ji.

Among many things that Maharaj Ji stated, the following are being presented here:

1)      It is true that one should start every activity with the remembrance of the Lord. But those errands which do not involve anybody else, where one is left with oneself should begin, continue and end with the remembrance of the Lord. Such actions include bathing, walking all alone etc. The practical way to remember the Lord is the chanting of the Guru Mantra or practicing deep navel breathing at all times.

2)      The essence of religion is not to do to others what you would not have them do unto you. So the businessmen should keep the interests of their customers in mind, while also earning appropriate profits for themselves. In this way, there is no doubt that their enterprises will certainly flourish.

3)      The greatest temple that exists is the human body.

The satsang concluded with the Raam Dhun and partaking of prasadam. 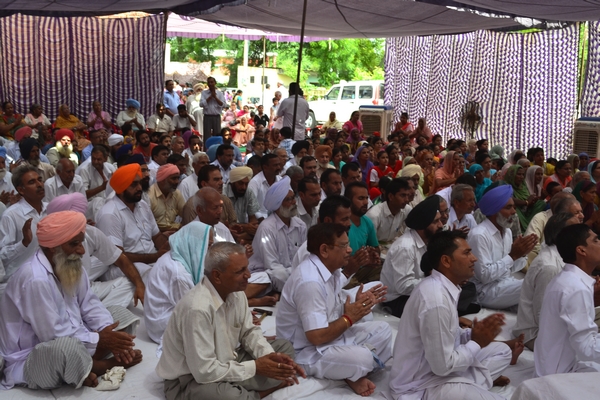