7-8 March: For the first time in recent years, the main sabha of Mahashivratri was not held during the day but during the night itself. It turned out to be a night of majestic melodies and thundering beats as the invited groups of musicians rolled out their musical repertoire. The night also had beautiful, instructive discourses by Devi Babli, Sadhviji and Swamiji. 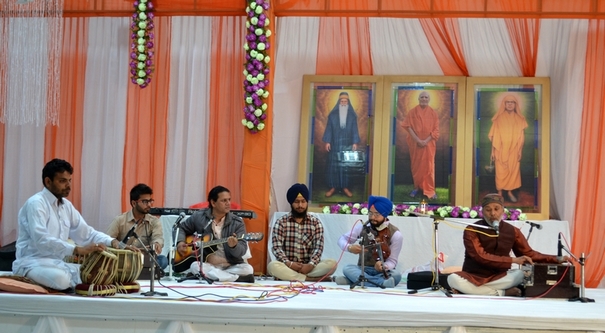 Dr. Rajesh Mohan (renowned poet- musician) from Faridkot and his students were the first musicians to perform on the night.

The program began at 8 pm on the night of 7th March with soulful renditions of Ganpati and Saraswati Vandana by the two eldest disciples of Shivram Guruji of Dahod (who taught music at the ashram for many years and was much loved by Shri Maharaj Ji): Bharati Ji and Kapil Bhai. Thereafter, Dr. Rajesh Mohan of Faridkot and his students on the tabla, violin, and guitar enthralled the listeners with their devotional music – both classical and light. Dr. Rajesh Mohan’s aalaaps were especially sweet to hear. 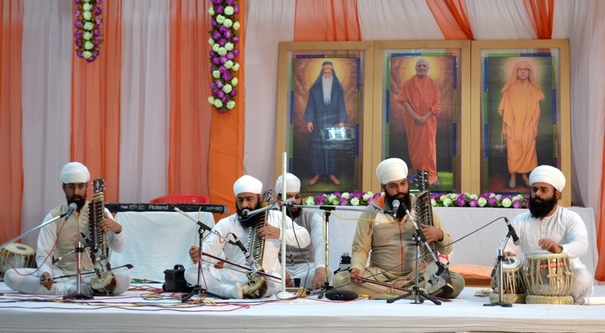 Following them and Devi Babli’s beautiful message, the stage was offered to the very accomplished raagis of Shri Bhaini Sahib who displayed the traditional form of Gurmat Sangeet. Dr. Harvinder Singh and his companions first sang a padtaal in Raag Desh, followed by a special composition of Sri Satguru Jagjit Singh Ji in 13&7/8 beats. 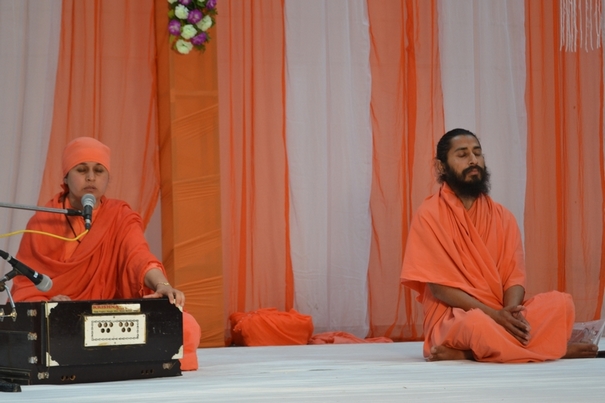 Sadhviji explained the significance of Mahashivratri in her discourse.

Following their superb performance, Sadhviji discoursed on the significance of Shivratri. She told that Shivratri is celebrated on on the 14th night of the waning moon. This implies that even in such circumstances when nothing but one ray of light remains, still if we can call out to the Divine, our plea is heard and answered. The crux of her message was to go within.

Kapil Bhai and other devotees from Dahod presenting a soul-stirring composition in Raag Darbari Kanhara.

After Sadhviji’s discourse the stage was once again offered to the musicians and as the midnight hour struck, Shri Kapil Trivedi and his group from Dahod sang a beautiful bandish devoted to guru’s grace in Raag Darbari Kanhara. Thereafter, Bhai Ishar Singh Ji gave a short solo performance on the Taar Shehnai (in Raag Yaman) accompanied by his brother Bhai Iqbal Singh on the tabla. It was followed by a spell-bounding, thundering solo performance of Jori-Pakhawaj by the very skilled Bhai Gian Singh accompanied by a melodious Lehra on the Taar Shehnai in Raag Jaijaiwanti.

It was finally the hour when Swamiji spoke. He explained to the devotees, the role of Kirtan, and the way to make music into a spiritual practice. Swamiji explained that if the goal is to hear what one sings, and not to perform it in front of others to win their applause etc. then music becomes a great means to draw the mind inwards. 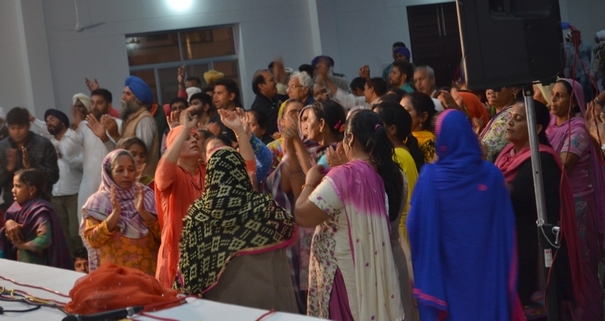 This was followed by a long spell of inward-tuned dancing on the music of Kapil Bhai’s group. The singing and celebrations went on right unto 4 am in the morning, when finally the musicians got their well-deserved rest. Many devotees however went straight to the temple to start a new day with the routine morning meditations.

This was, in nutshell, what transpired on Mahashivratri 2016 celebrated in the Satsanga Hall, in the vicinity of the awakened site of Shiva – Tripur Shiva Peetham.