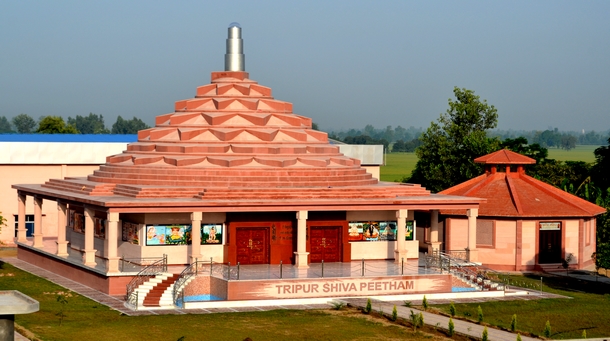 4th October, 2014: The wait is finally over. The seed that was sown about 3 years back (on March 30, 2011) has borne its fruit – the Dhyana Mandir Tripur Shiva Peetham has been inaugurated and has been now opened for the general public. This mega event which took place on October 3 was attended by at least 20,000 people. It is now well known that not only the building of the temple is an architectural marvel, but within it is installed the biggest Sri Yantra (made in crystal) in the world. About 5 feet high and about the same dimensions at the base, it is a spectacle to be witnessed. Furthermore, this Sri Yantra has been energized and consecrated. For 40 days, before the inauguration of the temple, Maharaj Ji lead a group of practitioners who practiced special consecration sadhana in the proximity of the Sri Yantra for 12 hours each day. The temple Tripur Shiva Peetham is now an awakened shrine capable of fulfilling the wishes of devotees and also offering strength, and guidance to practitioners of Mahayoga. 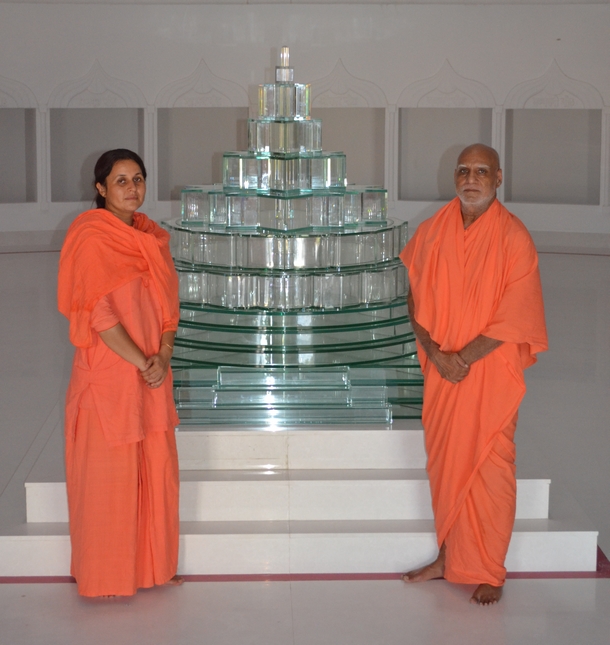 Maharaj Ji and Sadhvi Ji with the Tripur Shiva Peetham Sri Yantra on the day it was assembled and installed.

An intriguing event occurred during the consecration of the temple. The Sri Yantra shown above had to be assembled layer by layer to reach its present form. On the day it was being assembled, the moment the apex “bindu” clicked into its position, the veil covering the portraits of Swami Dev Puri Ji and Swami Dyalu Puri Ji fell to the floor in such a manner that the gaze of the two siddhas fell directly on the Sri Yantra. Maharaj Ji, who was present at that time inside the temple reacted to this by saying that it is the gaze of the saints that consecrates any object and therefore, the Sri Yantra had been consecrated that very moment by the glance of the two masters.

October 3 and the days leading to it were of immense festivity. The number of devotees who reached the ashram on this occasion overflowed beyond the lodging capacity of the ashram and arrangements had to be made for them to stay in the village. SSKYoga, Agni Kriya was held in the morning and evening respectively. Every afternoon Maharaj Ji took one aspect of Sri Yantra and discoursed on it. These lectures were also recorded by a TV broadcaster and are being televised in the states of North India. Another reason apart from the inauguration of the temple that made this significant was the special announcement that Shri Maharaj Ji had to make regarding His upcoming Mahayogic practice in solitude. Therefore, all devotees saw it as an important duty to spend time in His company whilst they could. 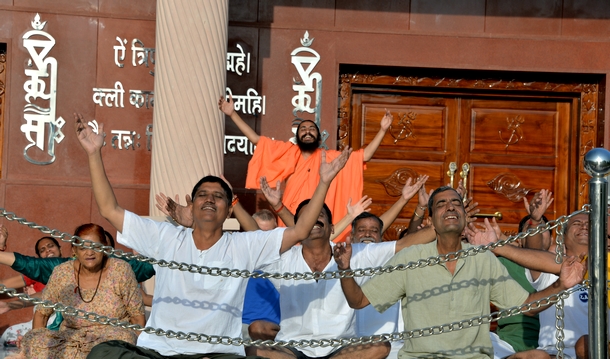 From Sept. 25-Oct. 2 Surya Kriya was held every morning; on most occasions on the consecrated platform of the temple, until the gathering expended the available space. Thereafter it was practiced in the Surya Kriya lawns. 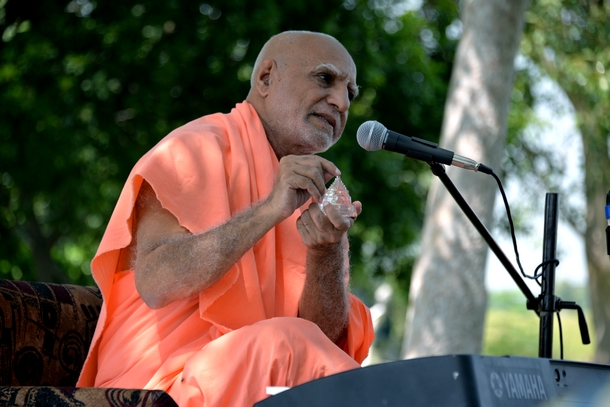 Every afternoon Maharaj Ji discoursed on some aspects of Sri Yantra sadhana. 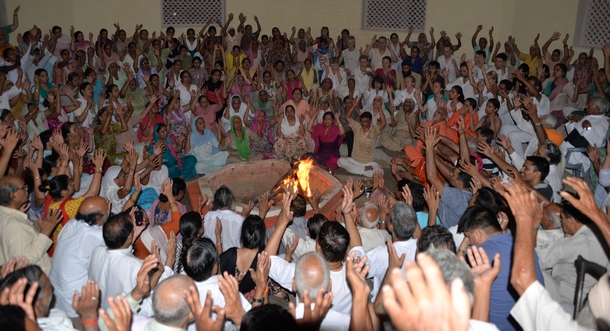 Agni Kriya sessions were held in the evening. 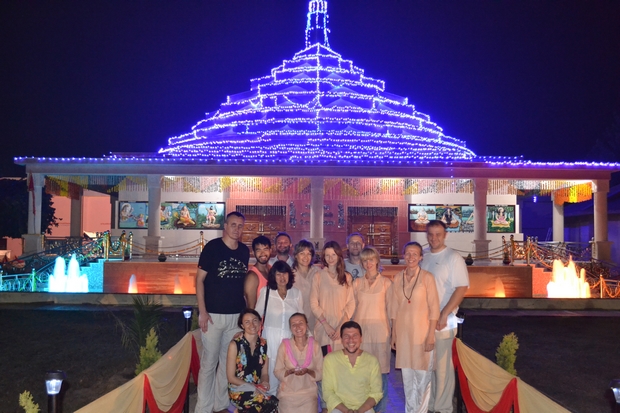 Friends from Russia/Siberia also added beautiful hues to the inauguration program with their presence.

A seminar on “Sri Vidya” was also held on October 3 in the newly built, huge satsang hall. Many saints spoke and enlightened the audience on aspects of Sri Yantra Sadhana.

Saints on stage during the inauguration program on October 3. They spoke on various aspects of Sri Yantra practice. 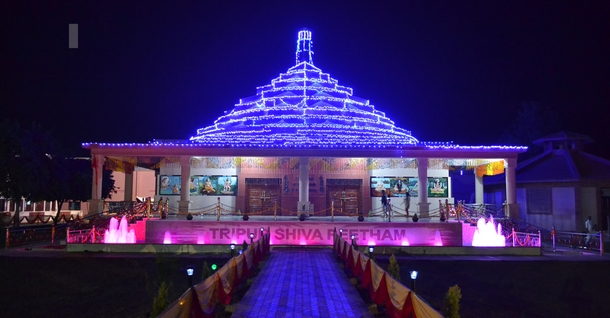