Of Flowers and Happiness: In Short, Holi Hai! 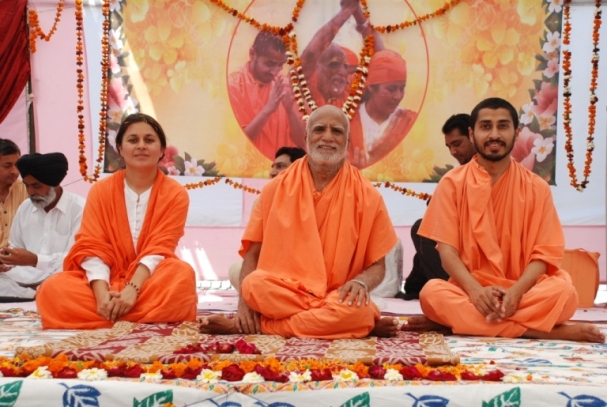 19-20th March, 2010, Vill. Maloya, Chandigarh: With Maharaj Ji’s visit the otherwise silent premises of the Naad Jagran Kendra became ebullient with intense excitement. The local devotees were seen in the thick of activity: welcoming visitors, serving delicious food and taking care of everything from a needle-pin to other larger affairs. 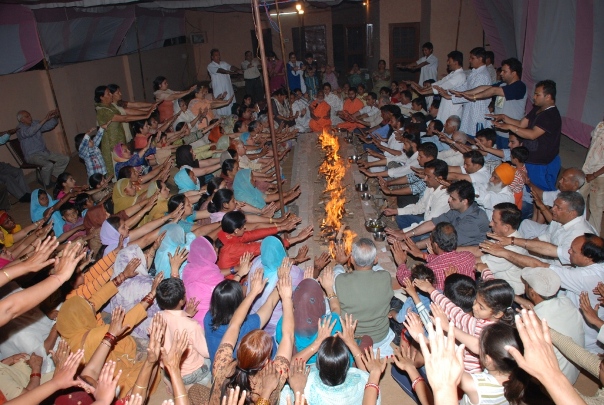 On the evening of the 19th, everyone gathered in the company of Agni (Fire) and performed the powerful Agni Kriya Yoga. The session was intense and varied experiences were obtained. Almost everyone felt deeply relaxed, some were stimulated still more and one of the participants began to shake uncontrollably because of some pranic activity within. 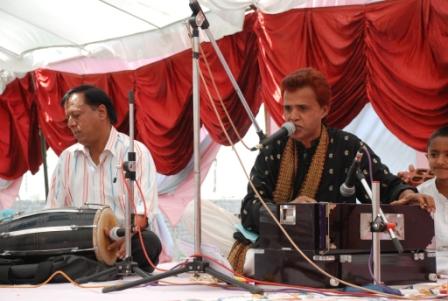 The clock ticked and finally we were in midst of the day that comes once a year and is dearly awaited for the happiness and fragrance it brings. The devotees had by now arrived from various parts of India and we were all set to celebrate ‘Phoolon Ki Holi’ (Holi, celebrated through flowers). The musicians took center stage and enthralled all through their diverse compositions which included fast track dhuns, melodious bhajans, lively quawalis.

The mind thus concentrated and made receptive was now ready to calmly sink into the series of riveting discourses. Sadhwi Yoganjali Chaitanya first took center stage and through a rich tapestry of words and 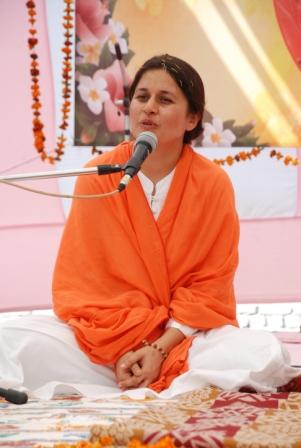 emotions observed that a lightness and happiness had pervaded the atmosphere; probably our hearts were really happy celebrating this occasion at the feet of Gurudeva. However, she then took our imaginations further by drawing a vision when we shall have an uninterrupted company of the Guru within our own being; then every single moment will be that of Holi, of happiness.

Swami Suryendu Puri Ji began in his usual playful style giving the audience a choice between ‘kali (ugly) and gori (beautiful)’ – what kind of a wife did one want? The allegory was intended to compare the not so beautiful objects of the world and the beautiful realm of the Divine, and was drawn from the story of a rich trader’s son who initially unwilling to accept his dark-complexioned wife comes to like her only because of having grown attached to her over a period of some time. Similarly, travelling in the maze of the dark objects of the world we too have become attached to them and not wishing to part with them never arrive at a true yearning for the supremely beautiful bride that awaits us within our own beings. The other part of Swamiji’s speech was centered on introducing  the ‘Tripur Shiva Pitham’ – the upcoming Maha-Yajna of establishing a spiritually empowered site to bring total vitality into the lives of aspirants.

And in this way, the stage had been prepared for the flow of nectar from Maharaj Ji’s large reservoir of inner direct experience, of description of the unseen and unrealized territory of the inner path, 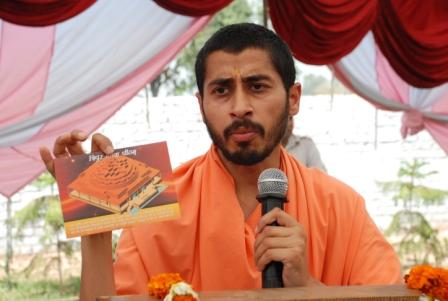 the what, why’s and how’s of spirituality. Here we must also beg pardon of the reader, for it shall not be possible to convey the richness and emotion that accompanies when you hear a saint directly sitting at his feet.  But yet we make an attempt. The first idea that Maharaj Ji expressed was that festivity Holi arrives when the summer is just around the corner. And it is eventually the heat of the inner-summer that will thaw the amrita reservoir within. The second idea drew an analogy between an external phenomenon of splitting of light through a prism and the appearance of seven colors within when the light and heat of all favorable and unfavorable circumstances is imbibed within, passing on its way through the prism of the ida, pingala and the central channel of the sushumna. The seven colors were linked to the seven chakras and then the plan of the Tripur Shiva Pitham was linked to the seven chakras as well. The third idea was linked to Sadhwiji’s speech of the real Holi being celebrated when the inner awakening happens. More ideas were also expressed and they provided inexpressible inspiration to the heart of every aspirant. In the end before breaking into the much loved and sweet composition of the Raam Dhun, Maharajji said that this external celebration of Holi was also an aspect of the inner-envisaged Holi and he thus asked everyone to play it with all frolic and happiness. 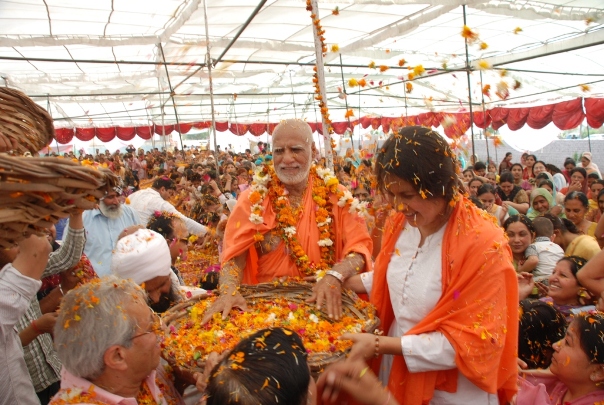 Raam Dhun followed and well after that it was a tale of flowers, fragrance, rasa, dance, drums and beats and tears sweet. The participants dispersed with smiles on their face, fed with the prasadam of Goddess Annapoorna.