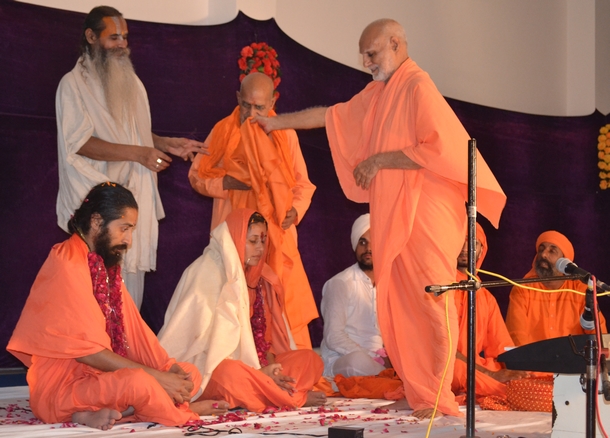 October 3, 2014: The inauguration day of Tripur Shiva Peetham was made historic by another mega event. On this auspicious day, amidst a very emotional atmosphere, Maharaj Ji passed on the baton and appointed Sadhwi Yoganjali Chaitanyaa Puri Ji and Swami Suryendu Puri Ji as his successors. It is noteworthy that many months before Shri Maharaj Ji had relinquished the Presidency of both Trusts at Mallke Ashram and Kila Raipur Ashram and appointed Sadhwi Ji as the President of both the Trusts, with Swamiji serving as the Chairperson of Mallke Ashram Trust and Vice-President of Kila Raipur Ashram Trust. Introducing the two, Maharaj Ji said that both of them were very close to him; even when he gave initiation during the past many years, the two of them remained always with him. He said it was important for the smooth functioning of things that he formally announced them as his successors. Maharaj Ji said that the two were like Shiva and Shakti and he had his total faith in them that they will continue to fulfill their duties in complete consonance with each other.
During one of the other lectures, Maharaj Ji, citing the example of Ram avataar, had said that the two were like Bharat. Though Bharat was physically far from Lord Ram still his service and devotion were even greater than Lakshman who otherwise was physically close to the Lord. Maharaj Ji further went on to say that the role of Shatrughana was also immense but usually goes unnoticed. He was the protector of the fortress that Lord Ram had built. Shatrughana was not even a direct “disciple” of Lord Ram but primarily followed the commands of Bharat. Similarly, Maharaj Ji said that to really vanquish ones foes like Shatrughana did one should be dasanudas (servant of his servants). On many occasions previously, Maharaj Ji, quoting Buddhism, had said that more important than going into the refuge of Buddha is going into the refuge of Sangha. Unless, satsangis live in love with one another, their devotion to the Guru isn’t true either.

Maharaj Ji leading the Ram Dhun at the end of his discourse and the instating ceremony.

Having passed all his roles to Swamiji, Sadhwiji and Tripur Shiva Peetham, Maharaj Ji is now on his way to go where the Divine Will takes him. His one and only inclination is to remain absorbed in the practice of Mahayoga and that too mostly in the Himalayas. It is instructive to note here that Maharaj Ji has never linked himself to ashrams and related affairs. When his Master left his physical body, even then he responded to his inner calling which was for solitude practice in the Himalayas. Many had asked him at that time to stay back in the ashram and practice, but he went on, on his grand way. After staying alone for almost 10 years in mountains and having gained a level of inner attainment (abhava yoga samadhi), Maharaj Ji responded to repeated requests of disciples of this tradition and came to live in Mallke village (at request of Bhagat Jagat Singh Ji, disciple of Kali Kambli Wale). By and by devotees built the ashram near Mallke. Maharaj Ji continued to stay here; but always, in reality, he lived and stayed inside his body. He never really got involved in the administration of the ashram. For him ashram was always a place where seekers could assemble and he could serve them by sharing what he had found within himself. Maharaj Ji’s inner journey kept on progressing and in time it was clear to him that the abhava yoga samadhi was just an important milestone and not the end of the spiritual path. He kept on working out the details of Mahayoga. And now it is time, when he says, it is all clear to him what needs to be done, it is only a matter of walking the path. Sometimes he also muses saying that he doesn’t know whether the goal will be achieved or not, but adds, that there is nothing else that he would do, except this.

The emotional witnesses to this transition.

And since October 4, 2014, after the gathered sangat had offered their pranams at his lotus feet, Maharaj Ji has remained inside his cell, not coming outside and has not met anyone. He plans to stay here in his room at the ashram for sometime, completing some writing work pertianing to Japuji Sahib and Sri Yantra practice, after which he will depart to ascend the peaks of Mahayoga in the Himalayas. But to all who wish to be present near him, he has said that they should keep coming to the ashram, for the tradition of sadhana will flow here just as it has until now. Further, the consecrated and energized form of the Sri Yantra installed in the Tripur Shiva Peetham will fulfill their desires and also offer the guidance and strength to walk the path. And for everything, there are two very able souls as his representatives to serve and guide all, desiring to walk on the path of sadhana; everything else being in the hands of the Divine.