Purification of body, mind and soul with Agni Kriya 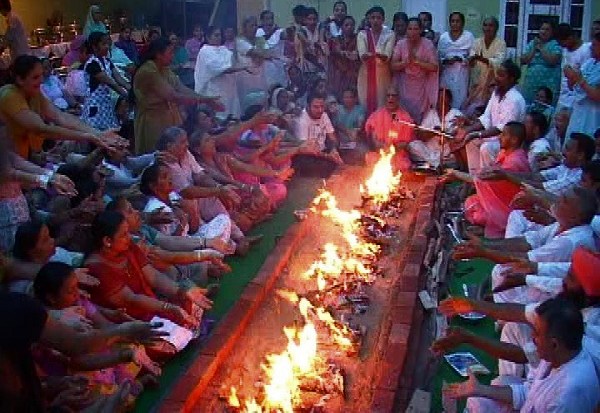 September 4, Maler Kotla. “Even though apparantly there is no work for me (in worldly sense) still there is hardly any time left to worry about breathing forget eating, drinking or sleeping.The path inside is so mesmirizing and vast that it captivates and consumes everything.” says Maharaj Ji oftenly. And this is why He remains locked in his cell most of the time but for rare appearances before people. It is mostly during annual camps that He spends enough time outside with devotees and whenever He visits Kila Raipur few more visits are added. This time Moudgil family in Maler Kotla were to be blessed after many years. They were so delighted that they spread the word all around their relatives, freinds, acquaintances and aspirants the very day they learnt about this forthcoming visit. They also arranged for Agni Kriya at their place which was attended by almost 250-300 people. The whole atmosphere was highly charged and everyone was feeling elated. Though, initially many of them were skeptical on this bizzare combination of summer and heat being oblivious to the practice. After the practice was over they were the main to talk about it, overjoyed with their experiences. In fact, the word spread so fast that soon after the practice was over many new people approached to learn this practice as they were so excited by the experiences of the participants even though they could not somehow attend it themselves.