13 August, Kila Raipur. It was the occasion of annual gathering at Harisar Ashram Kila Raipur in memory of Swami Dev Puri Ji renowned as Prabhu Kambli Wale. It is almost seven decades since he left his physical form and got established in the absoluteness. His life was an amazing example of sewa (selfless service), bhakti (devotion), tapas (austerities), and yoga. The way he wandered in the world while searching for his guru, he would never take a single step without uttering Lord’s name and if he had to talk, he will stand at one place. The way he served his Guru, day in and day out, even if the circumstances were adverse and his basic needs such as food and rest were at stake. The way he performed austerities to get established in yoga, aloof from entire world including his own body and sitting under one tree for seven long years, during that period his toes were bitten by rats and his blanket, the only cover he had, was eaten up by termites and snakes would often roll over his body. In later years, he dived so deep inside that the fire of Kundalini spread throughout his body and he had to stay inside ice-cold water for hours even in extreme winters. Consequently, he mastered not only his own body and mind but also the universal force and mind. However, he never used his mystical powers unless it was needed for saving a life. 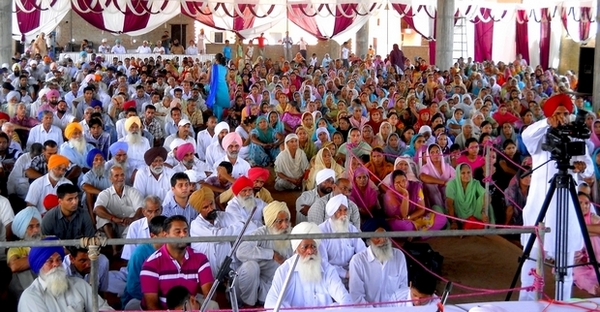 On this occasion, many devotees offered their love and reverence in form of devotional songs and keertan before various sadhkas from the lineage of Prabhu Kambli Wale shared their spiritual insights and experiences with the audience. First of all Br. Guru Chaitanya Ji who generally lives in Himalayas and visits ashram occasionally, discussed the importance of surrender on spiritual path. He said, “The inner path starts only when an aspirant renounces his/her intellect and surrender to a master who is already established within. As long we strive to walk on our own feet, the inner path doesn’t open as the main obstruction on the inner path is our ego. We cannot cut our ego by itself; we would need someone who is beyond the clutches of ego, to pull us above. We need to commit ourselves to such a guru and follow his command completely even if our intellect cannot perceive or appreciate it at first. Life of Prabhu Kambli Wale is best example of this guru-bhakti. However, we cannot have such extent of surrender unless we are determined to attain the spiritual height like our master.” 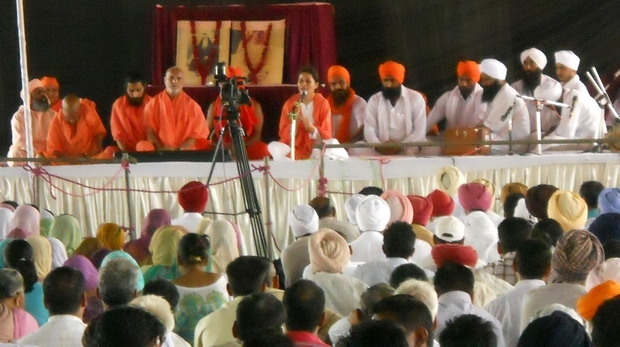 Sadhvi Yoganjali Chaitanya extended this discussion by focusing upon the ultimate goal of life. She gave emphasis to the fact that in guise of health, wealth, recognition and every worldly feat, eventually we are seeking happiness. However, similar to this world itself, all the worldly achievements also have a limit. Since our origin lies in absoluteness, we can never become happy with limits whereas the happiness attained through worldly achievements can never be absolute. This discontent forces us to seek more and more but we need to realize that more of anything cannot bring us happiness, as we already have everything but we are not aware of it. The prime purpose of gifted human life is to explore this hidden treasure by diving deep inside. Evidently, the best possible way to dive inside is holding the rope of breath and tying it with guru-mantra.

Further adding to this discussion, Swami Suryendu Puri drew the attention of audience towards the path of Mahayoga that Prabhu Kambli Wale had opened before them. Prabhu Ji was indeed a divine incarnation but to set an example before commoner he lived a very pious and illustrious household life for some time. Then he renounced all the worldly limits to get united with the limitless. He did not give up just his household life but everything that imposed limitations such as heat, cold, hunger, thirst and even sleep. Supreme devotion combined with extreme austerities and unceasing contemplation over guru-mantra transformed even his physical body and set it free from any worldly limit. This freedom made him world savior. As the holy Ganges assimilate any current approaching its bank all through its journey into the ocean and liberating them from their limits unites them with the grandeur of ocean. Similarly, Prabhu Kambli Wale accepted all aspirants who approached him and raising them from their level with his support, he guided them to the absolute. As the river flows incessantly even though its water is replaced with time, likewise the guidance of Prabhu Kambli Wale extended further in form of his successor Swami Dayalu Puri Ji Maharaj and now Swami Buddh Puri Ji Maharaj and his teachings are presented in more elaborated form suitable to contemporary needs. Even if we are weak and wavering, once attached to this surging river, our deliverance is inevitable. 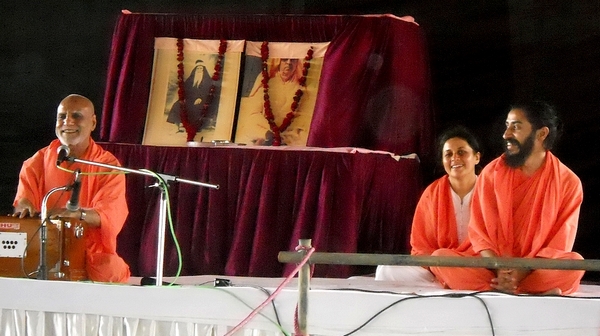 Finally, Swami Buddh Puri Ji Maharaj showered his blessings upon the devotees through his inspiring words. He reminded them of scriptures that have made a clear announcement – “Thou Art That” or you are essentially divine. All one needs to do is to reveal this potential. Such as a seed has the whole tree in it but that is manifested only when the seed is willing to break its limits and dissolve into the soil. Seed has the potential but soil has the power to bring that out and without this help, seed will wander from here to there vainly as wind may guide him. Jiva is the seed being pushed all the time by worldly wind and moving restlessly sometimes in air and sometime in dust. This misery could be overcome only by surrendering to the fertile soil that we call guru and dissolving our egoistic limits into it. God is limitless hence it is essential to go beyond all the limits if we were to unite with him. Obviously, we cannot cross our limits by ourselves without help of someone who exists beyond limits. Prabhu Kambli Wale did not only break all such limits for himself but opened a path before us, which may lead us all to the limitless.

However, this journey would start with the strong belief in this scriptural announcement – “Thou Art That”. After that, we will have to follow the path set by accomplished masters, such as Kambli Wale, with complete devotion. Remember, all the paths lead to same God so once we have chosen a path we must follow it until the culmination and not keep on trying every other possibility or try to learn every available kriyas (practices). Spiritual growth is not about learning many kriyas but turning the mind and prana inwards. As long we listen to our outward focused mind, we would fall short. Therefore, the safest and best way is to surrender our mind to an accomplished master and follow their teachings. A note of caution here – we should not try to imitate the lifestyle or behavior of guru but follow the teachings and practices given to us. (We shall soon upload the lecture.) Finally, Maharaj Ji intoned ram-dhun, which spread divine vibrations among the devotees, and they all followed him with closed eyes but open hearts, swaying on the inspirational melody. 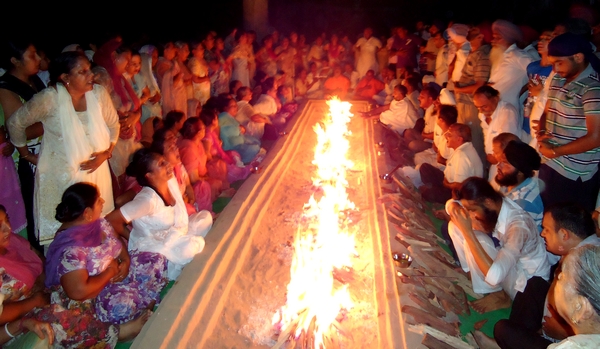 As usual, Maharaj Ji stayed at Kila Raipur Ashram for three days and conducted satsang every evening followed by Agni Kriya Yog (Fire Meditation) which was attended by a great number of devotees.