April 14, Kila Raipur. On Baisakhi, a day celebrated annually all across the Punjab as crop festival, the devotees of Harisar Ashram gather at Kila Raipur to commemorate the incarnation of Swami Dev Puri Ji aka Prabhu Kambli Wale. On this occasion, special pooja, bhajan-keertan and discourses take place and thousands of people eat langar, the blessed food.

This year, the whole arrangement was carried out under the direct supervision of Sadhvi Yoganjali Chaitanya who was recently designated as President of the Ashram. Sadhvi Ji has brought a great reform in the ashram in just few months of her stay here. Quality of food in the langar, facilities for the sadhus (almost 50) living there, cow shelter, basic amenities and maintenance, everywhere her presence is plainly visible in form of great improvements. She has also started regular classes of Sanjivani Kriya and scripture study there. Local villagers and other regular visitors are very enthusiastic and accommodative about all this. Moreover, they have started to devote time in sewa/ service as well, not because Sadhvi Ji asks them but because she does it herself. 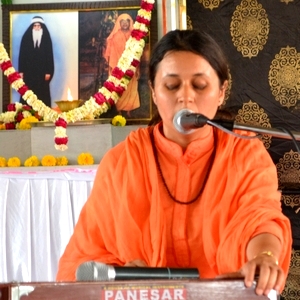 In her inspiring discourse, Sadhvi Ji focused on the need of sewa, satsang and sadhna. In her typical style, she raised questions for audience to ponder and then explained them. She started her lecture asking- Why do such highly evolved souls as of Prabhu Kambli Wale assume the human body? Obviously, they are already liberated yet they come back because of the compassion they have for us all. A true guru would want his disciples to get over all the limitations and miseries of this world and attain the ultimate happiness, once for all. Hence, it is our duty to surrender to Guru’s command and once we do that, everything will change: Our desires will shift from worldly pleasure and power to spiritual bliss and peace; our love will expand to embrace even the unknown; our mind will immerse in Guru’s teachings and mantra in lieu of anger, greed, hatred, lust and alike. However, to make it happen, we will have to remember certain things very clearly:

She emphasised on recognizing the worth of human life and suggested to use it in attaining the eternal peace and happiness, which is the goal of life, instead of wasting it in passing pleasures and trivial things of this mortal world, which are bound to perish. Spiritual science make us aware of this goal and help achieve it, therefore, it is essential for every being, she added supporting it with an instance from the life of Prabhu Kambli Wale—Once a devotee requested Prabhu  Ji to open a school for the children of nearby villages. Kambli Wale laughed and said, “You are asking a diamond merchant to deal in coal. We are already running a school for eternal divine knowledge then how can we even think about this trivial and transitory worldly study.” 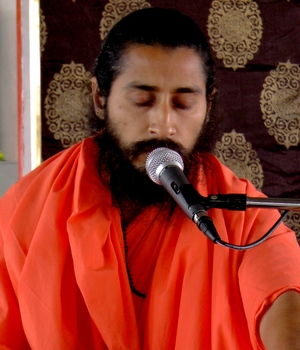 Later Swami Suryendu Puri Ji, in his discourse, described the three categories of people based on the three gunas (sat, rajas and tamas) giving various real-life examples and asked the audience to check on their condition, and adjust the course of their life accordingly to attain the ultimate truth and eternal happiness.

1         He described the first category as one of the ignorant people who cannot differentiate good from bad or beneficial from harmful. Due to prevalence of tamoguna, they want everything doing nothing. Besides, blinded by the worldly desires, they often fall for wrong path. They may even visit temples and gurus seeking fulfilment of their worldly desires but still they do not follow the instructions received from there. In fact, they don’t hesitate let down their teachings, disobey them or even abandon them for the sake of selfish gains. Such people maintain various fears and often incur failures in life.

2         Rajoguna is prevalent in second category. People of this category are very egocentric and extrovert. They run after worldly pleasure and possession. They may involve in sewa and sadhna too but they give higher priority to world and worldly business and consider Guru to be another human with extra abilities and wisdom. Therefore, they would not hesitate to file lawsuit against their parents to inherit their property but hardly care for the spiritual heritage of their Guru. However, as long we are allured and guided by worldly pleasure and possessions; as long we depend upon objects and people of this mortal world; we cannot achieve the eternal happiness.

3         The pious people, who not just respect but also follow God and Guru devotedly, belong to this category. Such people live a righteous life and give their heart to the ultimate goal of life. They aspire to attain the highest truth at any cost and all their endeavours are inspired by this very aspiration. Knowing that ego is the main hurdle on this journey, he submits unconditionally to Guru’s command and pursues satsang, sewa and sadhna on regular basis.

So, if we really want to celebrate the appearance of Prabhu Kambli Wale then we will have to allow his grace, in form of his sadhna and teachings, to occupy our mind and body. By the virtues of previous births, we have such a gracious Guru; hence, we must make use of this opportunity and move on.