Sadhviji’s Discourse (Listen to audio or  Download right click & save as): Sadhviji began by announcing the new month to the sangat through the following tuk from the Bani of Barah Maah (Twelve Months) from Sri Guru Granth Sahib: 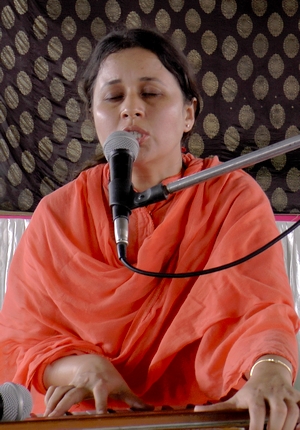 The month of Saavan is very refreshing. There is greenery all around and the entire creation is in a mood of celebration. This is certainly true of the world outside. But, is it also true of the world that we carry inside us? Do we feel as green and as happy as the creation outside, in the month of Saavan? Mostly, not. However, Guru Sahib has an answer for our unhappy state. He also shows the path, in very simple words, to make the month of Saavan, a month of joy and celebration. The solution is – loving God/Guru; imbuing our tann-mann (body-mind) with the True Colour of the Name (guru-naam); making the Name our very foundation.

Many creatures live in water. But, the water is ‘Life’ to only those who cannot survive without it. Others, who can also live without water (on land, for example) cannot claim to have made water as the basis of their lives. Similarly, only those who have given their ‘All’ to God/Guru have also made The Name as their foundation. Otherwise, more often than not, it is the world – its objects, its fame and praise, the satisfaction that our egos derive from it – which remains the foundation of our lives.

The story of Shabri or Bhilani from Ramayana is quite instructive in this context. It gives us a glimpse of true love. Born a low caste, she left home to serve saints. Very secretly, she would clear the path of thorns that the saints took for their morning ablutions. She would gather firewood and pile it near the walls of the hermitage. Finally, the rishis came to know that it was Shabri who was secretly serving them. Matang rishi accepted her as a disciple. When it was time for the Guru to leave the body, the devoted Shabri also expressed a desire to pass away with him. But the master told her to wait, for Lord Rama was expected to visit their region. Under Guru’s direction, Shabri’s body and mind got attuned to Rama. Thinking, contemplating and meditating on Rama became her sole activity. She would gather berries from the forest, waiting that Rama would come, that she would then feed him. And when finally Lord Rama did arrive in that region, he went to the humble dwelling of Shabri, leaving behind the hermitages of renowned saints. Shabri had kept the berries ready to feed Rama. But how could she feed any berry to her Lord! What if it turned out to be bitter! So, Shabri would first bite, taste the berry and then offer it to Rama to eat. In this way she fed the Lord. In her love she had risen above all norms of worldly behaviour, of right and wrong. The Lord too partook, with pleasure, of the devotee’s love.

In true love there is no desire for reward or remuneration. Is our love for God/Guru as pure? We would notice that our love is fueled by desires and expectations. If the Guru fulfills them, then we also love him. But if something goes against the wishes of our mind, then we feel betrayed and hurt and even withdraw from the Guru.

If we do not find joy in the practice of The Name, we should know that we are diseased by the world. Our minds are stuck in the worldly ruts. Just like to the one diseased by over-activity of pitta in the body, even sweet does not taste sweet; similarly to the one diseased by the world, the bliss-imbued Name tastes dull. But just like the treatment of the pitta-dosha lies in consumption of lots of sweets, similarly, the disease of the world is also treated by the continuous practice of The Name. We all can test the state of our mind in this way by observing where our mind derives its satisfaction from.

Usually, we want both the world and God. But this isn’t possible. The world is outside, and God is to be searched inside. We think we will pray for sometime and then do whatever possible, by hook or crook to meet our worldly needs and all will be well. But this is like mixing sand and sugar; only unpalatable sand will be left behind. So, it is important we take note if we are really following the path shown by the Guru or following our own whims and desires on the pretext of following the path.

Our intention is definitely not to hurt anyone but if something that we say tastes bitter to anyone, it is still good, for then there is a chance that our words can work to bring some change. One way to express love for the Guru is by joining all the devotees in celebrating Guru Purnima at the Guru’s own dwelling. So a devotee shouldn’t miss it. 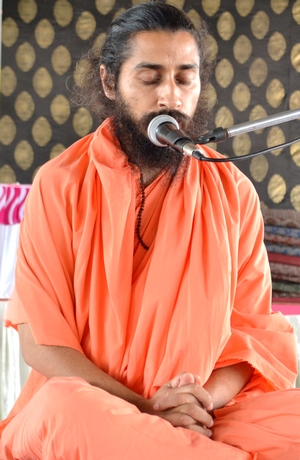 Swamiji began his discourse by alluding to the central theme of Sadhwiji’s talk which was about love for God. He narrated with great beauty the example of Amir Khusro and his burning love for his Master. Since the beauty of this part of the discourse can truly be appreciated only by hearing it on the audio file, and not merely by reading it, we have chosen not to attempt a transcription of the same. Swamiji, went on further to say:

To not limit the personality of the Guru to just a body. A true disciple knows that his Guru is much much more than the physical body, and that, in reality, the personality of the Guru knows no limitations of space and time. The Guru is within too. Swamiji rekindled and revised the purpose of Maharaj Ji’s solitude. It is not that He has left anyone. But whatever has happened is according to the Divine Will and He is only opening the path of sadhana further, for all those who wish to walk on it. His solitude also gives us an opportunity to increase our own yearning and intensity to walk this path. It is a chance to advance to the next level – but this  will be possible only when there is a bond of love between us and our Guru, and our relationship with Him is for the purpose of sadhana, and not just for seeking mundane benefits. The current times when Maharaj Ji has gone to the Himalayas are times of great turmoil for the devotees and give an opportunity for us to determine where we really stand on the path.

Towards the end of his speech, Swamiji touched upon the current situation of the Kila Raipur Ashram and said that whatever is happening there is with the aim of creating an atmosphere of sadhana there. He narrated how once Maharaj Ji had said that both He and Swami Dyalu Puri Ji had been mainly inwardly-focused, and owing to their primary focus on sadhana they did not give as much time to improve the then rajasic atmosphere of the ashram, and when they had tried, the people were not quite ready to walk the path. But now, it has been witnessed for a long time that people here too are interested, just as in Mallke. With that in mind, Maharaj Ji bestowed the guruship upon Sadhviji and has asked of her to serve the sangat at Kila Raipur. Things are changing. Soon with the completion of the expansion-work of the Samadhi Mandir, there would be a daily routine of focused meditative practices and sadhana camps here as well, just as in Mallke Ashram. All this is happening for the sangat. The onus to contribute to this task is also on those who wish to realize this aim.