Maharaj Ji visited Delhi from 22nd – 26th of January.  Evening satsanga was held on the 22nd at Punjabi Bagh; on the 24th Agni Kriya Session was held at Krishna Mandir, and on the 26th another satsanga was held which coincided with the Bhajan Sandhya ceremony, held as a part of the celebrations for devotee Vijay Suri Ji’s younger son – Nikhil’s – marriage. Following are the reproductions from the thoughts shared during the 22nd Jan. Delhi satsanga.

In the entire creation the greatest creative work is the human body. But there is a big question that accompanies this basic fact. Though, this body is the greatest creation, yet, there is so much suffering in it. Why is that? The body decays and dies. There are diseases and pain. Why should disease, decay and death be inseparable parts that accompany this tremendous boon, which the sages and the scriptures eye with the greatest regard? Is it possible that though this body may remain, and yet there be no suffering or pain; that we may not experience diseases, decay and death? Is it possible?

The very fact that there is disease, decay and death in the grandest creation, implies, that there are still more possibilities of growth and evolution in the human body. Once, these possibilities are fulfilled then man would verily become a god, one that will also walk on this earth.

The human body is the seed of all creation; it is the essence of all the worlds right from the material world to the realm of the Brahman. It is only possible through the human body for the consciousness to become all encompassing (vishvaroop ) and simultaneously  connect to the entity existing beyond the worlds (vishvateet). We do many actions. We have many thoughts. But why don’t our actions and thoughts become means to attain immeasurable bliss, though each one of these is motivated by this same underlying desire. Why do thoughts of anger and greed get mixed in them? Why is there so much outward tendency of the mind and the prana?

The same actions that we do now, which also bring us misery and pain can and do become the means to liberation, bliss if they are done in such a way that through them our consciousness is turned within.

There are two main reasons for the existence of diseases: the outward entanglements of our mind, which dissipates the strength within and improper, bad diet. Furthermore, even old age and death has a cause which is simply the ignorance our own divine Nature and consequent dependence upon external sources of nourishment. If these dependences are there, and one is awakened in one’s true divine nature, then this same body will evolve to carry the Lord, totally awakened within it. It would be freed of the clutches of disease, decay and death. It would become a door for spreading pure truth, consciousness and bliss in the world.

Today, we will talk about small details, the little drops, which when contained will fill the bucket to an extent that the aforementioned will become a reality, someday:

We must take care that whatever we eat should be properly digested by the body. This implies not only to the nourishment one takes from mouth, but also through the nose (breath), and further through, eyes, ears etc. Breathe completely. When the breath is complete then wastes do not accumulated within the body. The quality of the sleep should be deep. But why is everything contrary to this?

What do we really do? To digest what we eat, we depend on choorans, medicines etc. The basic reason for all this is that our mind is outside. This is the basic thing. The starting point to take mind inside is – asking who am I, or believing that I am the part of the Lord. The same Lord is present within my body, in the Dasham Dwara in all splendor and light. The moment we will try to take our mind within, everything will start getting right!

So, after these series of questions and answers we come to the most basic question at hand:how are we to bring our mind inside? The greatest incline upon which the mind gets wings to rush outsides is our desire for wealth; this is especially true in the present times. But, we are not saying that money and wealth itself is wrong or false, but what we are saying is that running after that it is wrong. Even worse is using all the wrong means, cleverness, trickery, deceit to earn it. Further, the problem becomes gigantic when we begin to believe that since we have earned our share we are entitled to spend it as we desire.  Anyone can earn and care for his family, even animals take good care of their families.

A story is well in order to illustrate the main idea. Once, the devas, danavaas, and men went to Lord Brahma to inquire how could their respective races attain greater evolutionary heights. Lord Brahma gave to each of them the letter Da, as a hint to the real answer. After contemplating the devas reached the conclusion that by da, what Lord Brahma may have meant was daman or control over their senses; this because they realized that their greatest weakness was excessive enjoyment of the senses. Similarly, the danavaas reached the conclusion that for them ‘da’ may signify dayaa or compassion; this because their race was cruel, and given to war and destruction. And after contemplating, men reached to the conclusion that by ‘da’ what Lord Brahma could mean was daan or charity for selfishness was was their greatest weakness.  Lord Brahma later confirmed each of the conclusions reached by the three races.

Daan simply means to realize that our earnings are not solely ours, the entire society has a share in them. After all, all creation is linked, and whatever we earn, various people, known and unknown to us have contributed to that. Thus, what also belongs to others must also be shared with others. Sharing in this way our earning gets pure, and the biggest thing is that we are rid of selfishness – the greatest stumbling block to our evolution. Further, while giving daan one should see himself as the giver, rather feel gratitude that through this his own mind is being cleansed. Daan is always accompanied by Dakshina, which means whatever is offered is to be offered with love, gratitude, reverence and not conceit and pride.

Along with this, it is necessary to ‘practice’ daily. We usually have the attitude that we can practice japa etc. while walking, or along with other chores. However, it is clear that for any other work, studying, eating, sleeping, we sit down and devote ourselves specially to that; so why should we make an exception in case of practicing! So one has to sit and practice. And while practicing the eyes are to be kept closed. The neck should not bend forwards which happens when sleep invades you while practicing. Note however, that sleep itself is not bad. When the mind becomes relaxed, sleep is bound to come. But do not allow the neck to fall forwards, because then you enter the realm of dreams and that is not practicing. You can use a neck, collar guard to help you with this. Further, do take the support of a wall etc. Sit straight. If you are reciting some text, it is better to keep your eyes closed and recite it from memory, or if you have to see it and read, then the eyes should not go higher and thither. You can also practice sitting on a chair, but keep the back straight. Also, sit down with a resolve to practice for so much duration, and during that time sever all contact with the external world. Do not make inquiries about any phone calls that might have been for you, during the time your were practicing. If something really needs your attention then, you will know about it for sure. If you can practice in a group, it is all the better.

We must always practice before going to sleep. Meditate until sleep comes to you. And while lying down try to catch the moment when we make the transition from wakefulness to the state of sleep. Now usually our sleep breaks midnight. At that time again begin to practice and while practicing your may sleep again. Finally, when you wake up in the morning then again try to catch the moment when you make the transition from sleep to wakefulness.

Go on increasing these practices, further and further, as much as you can or want to.

(In response to some follow up questions, it was said) Know, that one who is not a yogi, cannot be a bhogi too. Why talk about the negativities of other people lest we may acquire them ourselves. 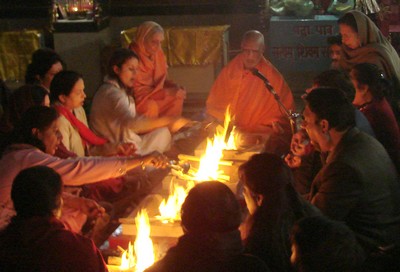