Seek health from the Sun 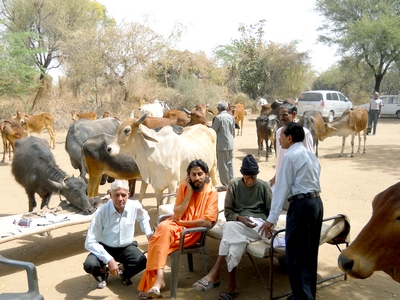 Mar 18-20 Bhilwara. Arogya Sadhna Ashram, Laduvas organized a 3-day long Siddhamrita Surya Kriya Yog camp in Bhilwara with help of Bharat Vikas Parishad. Vaidya Labhshankar Joshi who is celebrating his 94th birthday on 22nd of March this year, is the main inspiration behind this camp. He introduced Surya Kriya to Bhilwara 5-6 years back when he invited Swami Suryendu Puri there. In his words, “I’d read in the scriptures- ‘aarogyam bhaaskaradicchet’ which means one should seek health from the Sun, but there was no practice known to me which could prove this until Surya Kriya Yog came to my notice. And since then I have fallen in love for the Sun and Surya Kriya Yog.” Vaidya a living example of health and vigor as in 94th year of his age, he is able to work more than a young person. He lives alone in his Ashram away from any worldly hustle-bustle and devote his day under the sun and night contemplating over the meaning of life in addition to serving and helping all those who come to him.

Hundreds of people from all walks of life attended this camp and learnt the art and science of assimilating sunrays in their body not only for physical and mental healing but for enlightening their life in totality. There were many people who had been practicing Surya Kriya since the last camp who shared so many experiences of healing and nourishing effects o f the Sun they had gained through Surya Kriya. There were many who were attending the camp for the first time but in three days they too had so much to tell and share regarding the healing effects the Sun manifesting in their body and mind.

Sanjivani Kriya was also shared in the camp, especially with the intention of correcting their breathing and energizing each and every cell of their body for better sun assimilation. It is really ironical to find through such camps that even after so much publicity about asana and pranayama, a large number of people are breathing shallow and incomplete. Expectedly, they are not able to reap the complete benefit of yoga in terms of complete health and vigor. 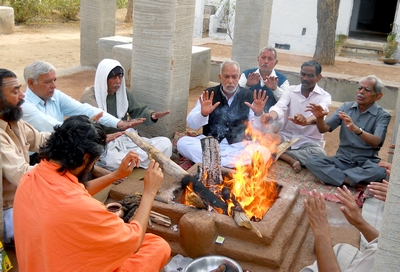 After the camp was over on 20th, Swami Ji went to Laduvas Ashram with Vaidya Ji and stayed there for a day. It is a beautiful place full of greenery (hundreds of medicinal plants are being grown there) and inhabited more by birds and cattle then humans. It is situated far away from the village and built very simply in traditional style. Swami Ji also introduced Agni Kriya there which left everyone feeling energized and elated. In fact Dr. Kasht, who attended the ceremony was surprised to notice that he wasn’t feeling hungry until quite late which is abnormal for him as he takes an early breakfast everyday. Similarly everyone shared how much fresh and ecstatic they were feeling.