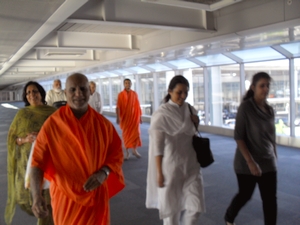 Earlier in the morning Maharaj Ji's ever smiling coutenance (as he arrived at the Toronto Airport) was captured for living memory; a welcome sight especially for those back in India.

Shri Maharaj Ji, Swami Suryendu Puri Ji, Sadhvi Yoganjali Chaitanya Ji and devotee Satyadev Pal Ji arrived on the soils of Toronto, Canada on the morning of 30th July, 2011. A new land, new people apparently, and yet so much still the same: the same struggle (only its outward form changing) and urge for happiness and fulfillment. After all at the deepest levels, the human urges, drives and psyche are common; common beyond the diversities of cultures, traditions, and nations. And probably because of this universality of the basics of being human, Maharaj Ji sometimes says, “We have the same thing to say, and have been saying the same thing for so many years, only the words and the presentation change”. So when Maharaj Ji were greeted by the buoyant and ebullient hearts, he immediately set out to make them his own. Inquiring all about their welfare, Maharaj Ji asked if anyone has a question to ask. Well, the response you could expect: no questions! 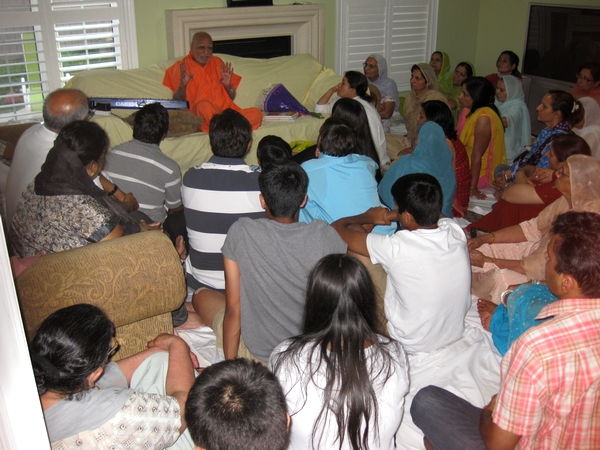 The evening of 30th July: None can wait to hear; all gather at the hosts' (Bant Ji's in Brampton) to hear Maharaj Ji's Love, Truth, Bliss-profused words.

How common it is that in the daily heat and cool of life, we often pass away our times in pursuits that are ultimately inconsequential in the long run; how often that we become one amongst the numerous others who arrived here and had some very basic questions at the core of their existence to answer and yet, went off without finding a satisfying answer to them. And the reason is quite obvious: we hardly devote the time needed to solve the basic puzzle of existence. It was against this backdrop that Maharaj Ji uttered once more, the same message, though in a form as fresh as the first rose of the pleasing spring.

Well, if we do not have a question to ask ourselves, let us introduce ourselves to some questions that man has been asking from the very earliest of times. Let us relate to them today so that we may contemplate upon them in much greater depth later. When we talk about spirituality and God, none seems to have the heart and time to hear the thing out and on other occasions the wall of our pre-conceived notions prevents the air of Truth of these matters from entering our lives. When we protect ourselves behind the repartee of “What is the need of looking for God”, we must first pause and ask, “Well, what is God, after all?”

Sat-Chit-Ananda are the clear and resounding attributes that the knowers of this science have placed on God. Just as we cannot escape heat in the proximity of fire, just like we cannot escape cold when lost in the tundra, similarly, we cannot escape truth-knowledge-bliss when we are contacted by God. Bliss is the one basic urge propelling us onwards on the road and its source and destination is what God is. “Yeah, but”, you say, “I find bliss in countless mundane activities; where is God there?” And here come the surprise, “There too is none but God.” Wherever there is an iota of bliss, there God has manifested, though how completely, is a different matter. The science that brings this direct understanding is what spirituality is.

And yet, bliss is not to be seen, it is to be felt and perceived. It is easy to perceive disease and despair; but what is bliss? We soon realize bliss is subtle, subtler than despair and suffering, and for now we settle at this understanding that it is opposite of what one feels when there is no movement, awareness, expansion i.e. despair. It is God that is bliss and because he is all-pervasive, wherever bliss comes to us, it comes through Him.

One could understand this in a thousand ways. A little example suffices: you feel blissful when a delicious meal is served to you. Now we feel bliss came from the delicious food. But here is the catch. Bliss came because the “desire” of eating a tasty meal got satisfied; and because the desire got satisfied, for an instant of time, the mind became calm. In the calm mind, the God residing within us, was reflected and hence bliss enveloped our being. You could go on eating the same tasty food, but a time comes that it can bring no further bliss. For the mind, which continuously yearns for more and more can no longer be satisfied with it.

This is, in fact, the whole problem with finding bliss outside. Mistakingly, we take bliss to reside  in the objects and we chase one aspiration after the other, forgetting that bliss resides within our own self; in fact we are bliss ourselves for are we different from God, the ever-blissful? It is on these grounds that Gurbani reminds us:

O why do you go searching in the forests? The omnipresent, untainted, incorruptible resides with you. Just like fragrance resides with the flower, and the image in the mirror, so does the Lord resides within your own house and so dear brother, search for him within your house alone.

Now, one should protect oneself from endless debates about living in the houses, in the world so as to say, and not go out after vain search in the forests, they being unsuitable environs for the comfort-habituated modern man and so on and so forth. The single significant teaching given to us here is that the Lord resides within our house (ofcourse, the house here alludes to the body), and it is within that that He is to be searched for.

Now how can we search within the house. Literally, just as we search for something outside, only reversed. So the senses instead of engrossing themselves in the world outside, have to be taught and trained to look within, hear within, smell withing and taste within. The breath that runs outwards (to 12 finger-lengths) has to be forced on to the inside. So one sees it is an entire reversal of the basics of living. One may get frightened at these seemingly difficult means to find God! However, this is no more a fear than what a toddler feels when first asked to go to school. The fact is that we have but no other option. We need bliss and bliss is to be only found in God and God resides in our own being. In fact, we go through much of this process daily in sleep. Then it happens all on its own, and then we are merely like the fans of windmill at the mercy of the wind of sleep. To learn to do this consciously and with control is what the science of spirituality is here to teach us.

Once we have understood what God is (atleast intellectually), where He lives and what is the need to attain Him then we reach to the most important question: How do we meet Him? And well, then one understands that in fact, the entire creation is working to this end. The duals of happiness and sorrow, birth and death, inhalation and exhalation are here to teach us the way to go within. All teachings of saints, scriptures and even our mundane pursuits and goals are to gain this end. This journey starts from the intellect. We are thinking beings (the biggest difference between animals and us) and therefore our journey starts when this goal and its means get rooted in our intellect. And then it must spread to all the levels mental, pranic and the physical. Clarity and determination through satsang+scriptures at the intellectual level, shraddha-vishwas (devotion) at the mental level and selfless service + donation at physical, purify all these levels and allow us to experince Him at all times at all levels. Then one realizes on all levels of being the truth of what has been uttered through ages: tat tvam asi, ayamaatmaa brahma, mann tu jyoti svaup hai. Then established in the brahma-randra he can finally experience the nature of “complete happiness”!