Oct 19-22, Shabad Surat Sangam Ashram, Mallke, Moga: The second of the two annual Sadhana Shivirs at the ashram, which concluded on the day of Dusshera, was made a doubly special event through the reappearance of Shri Maharaj Ji, after a complete year’s solitude. The year prior, during the inauguration of Tripur Shiva Peetham meditation temple he had announced that henceforth his external role will be fulfilled by both Swamiji and Sadhviji, while he dedicated himself to only and only the practice of Mahayoga. Maharaj Ji had spent some time, in solitude, in the ashram, after which he had silently departed for his new abode in the Himalayas. 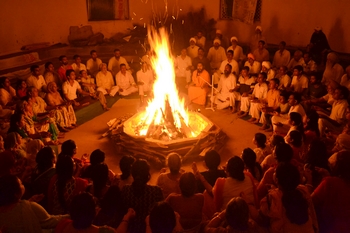 A scene from one of the Agni Kriya sessions during the shivir. 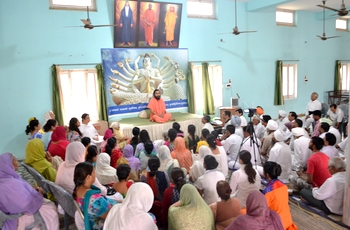 Talks on spirituality by Swami Suryendu Puri Ji during the shivir.

However, by the Divine/Guru’s grace, Maharaj Ji happened to return to the ashram near August 2015; but continued to remain in his cell, in solitude practice. However, on repeated pleas of the sangat, mediated to him by Sadhviji and Swamiji, the ever compassionate Master, also agreed to appear once before the Sangat, on the occasion of Dusshera’s Grand Satsanga. The featured image to this post on the Home Page Slider captures how Shri Maharaj Ji were lovingly escorted from this cell to the Satsanga Hall.

Shri Maharaj Ji were lovingly escorted from his cell to the satsanga hall. 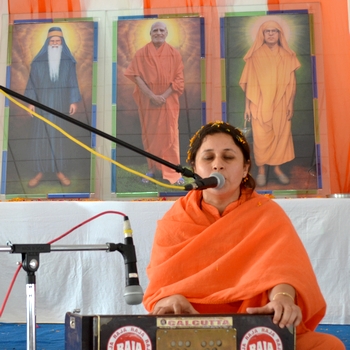 Sadhviji invoking the Guru before beginning her emotional discourse which was on the significance of the feminine.

You can listen or download Sadhviji’s Dusshera message here. This discourse of Sadhviji’s focuses on the feminine. In it, she talks about fundamental feminine qualities of forbearance, tapas, surrender and love. She brings out these qualities through the central feminine characters of the Ramayana – Sita, Urmila, Mandodri, Kaushalya et. al.

However, she says, that in modern male-dominated society, where on one hand, people have fallen so low as to abort a girl-child, on the other hand, women too are blindly copying men, leaving behind their core essential nature. This tendency among women is at the root of many ills prevalent in the society today.

She narrates the epic story of Savitri – to bring the grandeur latent in the feminine, and inspires the women to rise and realize their potential. Then alone Dussehra can be truly celebrated; the demon Ravan be truly vanquished. 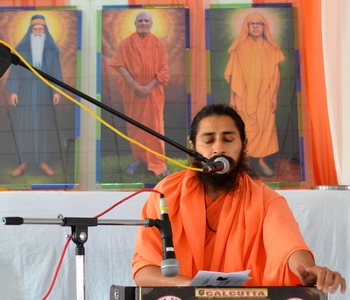 Swamiji’s address was emotional, loving, and highly inspiring on this occasion.

This discourse of Swamiji’s is much more than a discourse. You can listen or download Sawami ji’s Dusshera message here. It is a free-flow of emotion, interspersed by words. When Swamiji talks about Bharata from Ramayana, he is so swayed by bhava, that many times he stops in between, before he can continue further. And why not? For the ideal that has been set before us in the form of Bharata is truly priceless. For no reason, Sage Bharadwaj Ji said, that the fruit of all his sadhana was obtained in the darshan of Rama, Janaki and Lakshman. But the fruit of Rama’s darshan was that he was blessed with the darshan of Bharata.

Swamiji’s succinctly profound message was – seva bhava – the spirit of service, in which everything melts. Yes, probably we can’t become sevaks like Bharata, but wherever we are, we can at least, care to keep Raam in our minds. But we try to become sadhus (special) and that is where Ravan=ego, catches us. Become sevak, as Gurbani beautifully says, “Mann baiche satguru ke paas…” (To sell your mind to the Satguru).

Finally, it was Maharaj Shri who spoke and you can listen/download his speech here or watch video here. 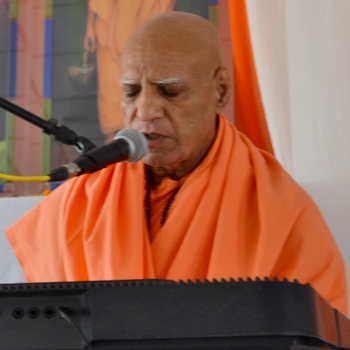 Shri Maharaj Ji begins by saying that things went on quite well during the past year: Satsanga and shivirs had been duly held, like always, at Malke Ashram. The situation at Kila Raipur has also been improving, slowly and steadily. “This praani (referring to himself) also lived in the Himalayas”, he says, and that “many people have inquired about the arrangments in that Himalayan abode”, and also the possibility of reaching there.

So first, Maharaj Shri goes on to describe the place where he said, he was staying with Guru Chaitanya Ji (Swami Guru Chaitanya Puri Ji). He says, that the arrangements there are of the topmost quality, despite a total absence of material conveniences. To reach that place, one climbs a solitary trail, through forests for 20 km. Only one village stands on the path. There are waterfalls, stones – a river cuts the valley and meets the Ganges. At night it is totally dark, save for the light of the moon. No sound of man is to be heard, but plenty of animals can be heard in the night.

Hereafter, Maharaj Ji addresses the second query, about the possibility of reaching that abode – the secret/open wish that devotees harbour in their hearts. He describes two paths – one difficult, another easy – to reach there. Maharaj Ji, at this point, also narrates the visit of a person who had arrived there (with tremendous difficulty) to meet Maharaj Ji, but had to return without the meeting taking place (by the time that person had arrived, Maharaj Ji had already left for his cell and Guru Chaitanya Ji were firm in telling him that he didn’t take the liberty to disturb Maharaj Ji’s sadhana at any cost. Maharaj Ji said that during those days, he too did not feel like coming out of the cell, and hence that person had to leave just like that). He had apparently taken the difficult road.

So what is the easier road that leads there? Another thing, “This easier road also happens to be the correct one”, Maharaj Ji adds.

However, Maharaj Ji goes on to add, what is the test/ milestones that tell us if we are really progressing, or are only being deluded by our mind and ego? This because, many people say that they are in tune with the Guru all the time, that they see the Guru everywhere, and are in samadhi even when they walk and talk. Theirs is a case akin to the case of someone who sets his own question paper, writes his own answers, then marks it himself, and declares himself passed. No, there are to be clear tests/milestones. What are they?

Maharaj Ji emphasizes these points by saying that you may cease to love him, but there shouldn’t be any animosity or lack of love between guru-bhais. How will that happen? By following the rules laid down. Yes, there always are exceptions to these rules but they are for the old, diseased, and a very advanced sadhaka. When we are in the ashram we ought to follow the rules laid down, which are there only to help our sadhana to flower. If we don’t, we will not be able to walk the path.

Before ending, Maharaj Ji remembers to mention how his visit to the ashram and consequent meeting with the sangat came about, for he himself had no thought of coming down just yet. He told how Swamiji, Swamiji, and Br. Tryambak Chaitanya had thought to visit him (for they know the route) but a landslide had prevented their course in between. So when, Maharaj Ji and Guru Chaitanya Ji had instead journeyed down, through a difficult, cross route to meet Swamiji et. al., seeing the difficulty of returning back to the Himalayan site again, they had instead travelled down to the town. Now, that he had come down to the town, he was requested to visit ashram once as well. And once in the ashram, he was requested to once meet the sangat as well. And therefore, Maharaj Ji, said he was sitting before all (which leads to elation in the audience). But also adds, that he plans to return soon, and jokes that none has clapped over this second statement of his. He further says, that if things keep on going here as smoothly as they have been and the mutual love (not moha) between gurubhais goes on increasing, there is no reason, why he could not come down again, sometime.