Simar Simar Simar Sukh Paavo…this was literally what the aspirants got down to this blessed weekend (12-14th November) , at Malke Ashram, in the warm sanctuary of Maharaj Ji. They meditated, meditated and meditated in the pursuit of mighty bliss that cannot be equalled but is to be searched only within the human body. For three days, eighty odd aspirants sat together in the mediation hall, making this inspiring atmosphere a springboard to dive into the deep caverns of their being. 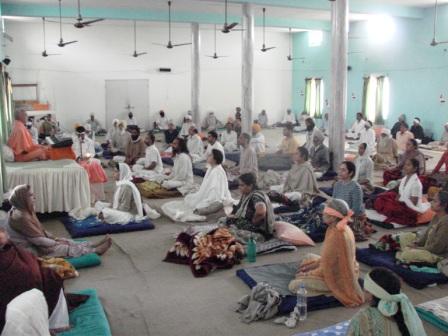 The activities of the sadhaks (aspirants) during the three days (and nights) can be best summarized by quoting the words of Maharaj Ji himself. Addressing them at the beginning of the second day at 6:00 A.M. in the morning, he said, ‘Right now we are not eating anything solid, just taking some liquid, this helps free the consciousness from its motions stuck in the senses…; some of us are not only meditating through the day but are also meditating in the night, therefore the sleep is also minimal: this helps the consciousness to rise into the head; except reciting and uttering the Divine names there is no usual talking too; which too takes the mind inwards…now if amidst this process you can be happy and joyous, the mind will be drawn inwards…and along with that if you can also add the fuel of guru-mantra in the combustor of breath, then surely, you will enter deep within.’ 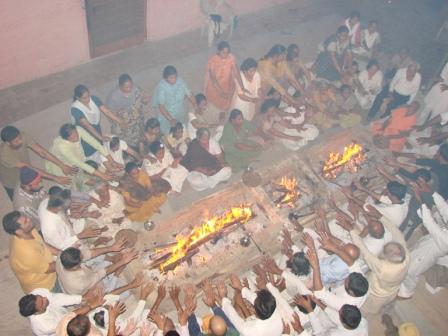 Thus, in such an intense, yet relaxed and ultimately joy-bringing atmosphere was this meditation retreat carried on. The session would begin at 6:00 A.M. with the soul-melting musical recitation of Vedic mantras in his powerful voice by Maharaj Ji and then he would take all deep within through breathing, keertan, meditation and so much more. The musical compositions would be repeated through the day to stimulate the mind to another level; wherein the aspirants would dance in their inner joy, all with closed eyes, listening and feeling their dancing and chanting. The day-session would be concluded with a session of Agni-Kriya yoga. The only food that aspirants took was a glass of sweet herbal drink (which was most delicious and refreshing) at around 9:00 A.M. in the morning. It would simply be kept near the seat of the practitioner, who would then consume it maintaining his inner awareness.  A glass of the much-famed lassi of Punjabi villages was the afternoon ‘lunch’. A glass of milk and a banana or an apple were given towards the end of the session.

Certain participants (the regular inmates of the ashram and a few others) would come together again (Maharaj Ji remained present throughout) in the dead of night; making the silence and stillness of the external world a door to the realm within. Addressing them Maharaj Ji would say that the practice done at night is aimed at opening the Chandra-mandal…now the focus is not on doing external kriyas but plunging deep within.

Through the course of this retreat Maharaj Ji also created a most melodious musical tune for the chanting of Raam, (which he jocularly later remarked was based on a very old song of Lata Mangeshkar). This also brings to the mind the little incident that took place on the second day of the retreat. Aspirants had been meditating for a day and a half; and all were concentrated (doing the practice of chanting Hindi vowels –it is a special practice that is done), when Maharaj Ji most remarkably broke the atmosphere with a laughter. And no sooner did that happen, did the hall erupted into sounds most peculiar…or joy and tears and so on. Maharaj Ji kept on the tide of laughter and relaxations with his amazing natural humour and all felt deeply relaxed by this exercise.

At the end of the camp, all aspirants wanted that they should also be made to practice through the night; and so next time one participates…one might experience the thrill of truly non-stop practice of more than 24 hours. Maharaj Ji also remarked later, that meditation etc. all are about relaxation. This relaxation also involves breaking off of the holds of ego in the mind and various another knots in the body. Once that happens, it is all joy…there is limitlessness…one can fill his organs with as much air as possible (allusion is to the practice of kevala kumbhaka) and so on…

Having surely tasted some of the Infinite Bliss that is called God, most of the aspirants returned to their karma-bhoomi (their stage of actions in the world) while others (inmates of the ashram and a few householders too) have extended their period of retreat, now becoming locked in for a week more to go deep, deep within. And as these lines are being written about 26 hours after Maharaj Ji concluded the retreat…the sounds of the mantram and the melody of the tunes still goes ringing within…!