Dec 27, Shabad Surati Sangam Ashram, Mallke, Moga: The last Sunday of the month of December was a boon for both body and mind. On one hand, Dr. Vikram Singla of the Vikram Hospital, Faridkot organized a free medical camp on bone health (which was well appreciated by the local people), and on the other hand, Swami Suryendu Puri Ji’s discourse on the other hand, provided us a rare chance for self-transformation. “Soch Ke Dekho” was the phrase that Swamiji repeated umpteen times in this discourse, as he tried to drive home the fundamental principles of the inner path. 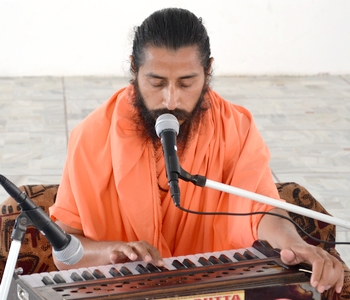 Swamiji begins with a narrative, the moral of which is to note that though we remember what transpired in the world even years back, but easily forget what was said in the last satsanga. But, Swamiji says, the world is here to just perish one day, and that all things are ever-changing; nothing is constant – neither happiness nor sorrow. So, instead of becoming entangled in them one should rather bear them – the exact word being “titiksha”. Swamiji was here elaborating on a verse from the Gita: मात्रास्पर्शास्तु कौन्तेय…(14/2).

Swamiji says that these days there is a growth of the selfish attitude:“It’s my life”. But this tendency takes us back to being animals, rather than expanding our consciousness, as humans should. Yes, one can do whatever one wills, but only if he his totally free from any obligations of the society. As long as we depend on the world for food, clothing, shelter – one should also fulfill one’s duties towards the world.

The mantram that Swamiji gives is to transform the 3 N’s: Nazar, Nishana, Niyat. Nazar (vision) should be clear; Nishana (goal) should be fixed; Niyat (intention) should be true/pure. At this point Swamiji gently scolds those who pretend impeccable behaviour for their guests, but would want nothing better than to see them depart! He  remarks, not without showing some anguish, “If you have to love, at least love truly.”

At this point Swamiji comes to a question that has been put forth by a devotee: We meditate, but the mind doesn’t cooperate. What to do?

Swamiji answers that the mind will not cooperate as long as it is not clear to us what dhyana really is and why we are doing it. Knowing the “What”, and the “Why” of a pursuit comes first, and before seeking the “How” of it. But we try to jump straight to the third rung of the ladder – “How to meditate?” is what we ask. But if we really come to think about it, we haven’t yet established dhyana our goal. It is the objects of the world that we are seeking. Swamiji makes an observation to elaborate this. He says that we don’t even spare our own child if he but spills some tea over us; our mind is so much stuck in the objects. Such a mind will never cooperate on the inner path. So first one has to clarify one’s goal. First one must break the chains that draw the mind again and again to its old habits, “The jack must be removed before the car can move”, he smartly says.

Only after being clear about the “What” and the “Why” does one come to the third rung of “How”. And for this Swamiji, shares some ways:
First, to be in the company of those who know how to swim (in this case swim in the inner sea). This will bring us, both – courage and support – for our own journey.
Practice Meditation – the first thing, every morning.
Only enter the kitchen after having washed, bathed, and done your pooja. Instill similar habits in your children as well.
Meditate before going to sleep and also before meals. Swamiji asks the audience, would they have the courage to meditate and thank God for their meal, even at a party? And then has this powerful statement to make, “Those who are afraid or hesitate to proclaim their love of this path, of God, before the world, are deluding themselves”.

Swamiji cites the name of Nup Singh Ji of Mallke who has been coming every day to the temple in the morning to meditate, ever since the temple’s inauguration last year, and also urges others to make use of this opportunity. Swamiji shares that Nup Singh Ji had asked Maharaj Ji if it would be ok for him to meditate at home itself. But Maharaj Ji had clarified to him the difference between practicing at home and otherwise. Ever since then, Nup Singh Ji has taken Maharaj Ji’s words to heart and has not missed a single day in the last year.