March 30, Malke. At Shabad-Surat-Sangam Ashram, this day is celebrated annually in memory of Bhagat Jagat Singh Ji who was the main inspiration behind the establishment of this Ashram. He was a man of values and lived every moment in the name of Guru and God. In fact, he never differentiated God from Guru knowing clearly that Guru is the door to God. He lived a household life maintaining a large joint family and working in his ancestral farm fields. However, he was very clear about goal of life and gave highest priority to it. Worldly loss or gains did not affect him and likewise praise and criticism did not bother him. He considered all his worldly duties as a test for his spiritual growth and delivered them earnestly without any complaint or apprehension. He always remembered and reminded to others the world of his Guru Swami Dayalu Puri Ji – This world is like a garden of God and we are his servants deputed as gardeners here, therefore, we must deliver our duties sincerely without any attachment or negligence. Our actions will bring us fruits in form of physical pleasure and pain but eventually it will all be left behind, however, our performance will determine our evolution. And we are here to evolve not to revolve in this vicious cycle of birth and death. 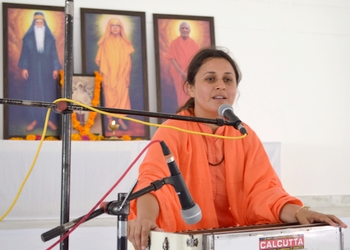 For the first time, Maharaj Swami Buddh Puri Ji was not present physically on this occasion having taken retirement from ashram activities. The Satsang was conducted by his inheritors Sadhvi Yoganjali Chaitanya Puri and Swami Suryendu Puri. A large number of devotees had gathered from surrounding villages as Bhagat Ji is greatly admired by the devotees here due to his loving nature and righteous life. People still recall his teachings that were focused more on day-to-day living than special rituals or ceremonies. Sadhvi Ji recollected memories from her early age when Bhagat Ji used to visit her village and conduct satsang there. She described some very typical qualities of Bhagat Ji and asked people to take inspiration from it. Few of them are being listed here for quick reference: 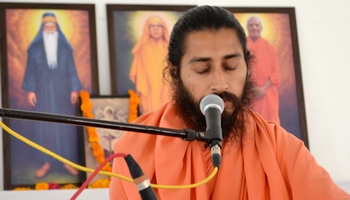 Later, Swami Suryendu Puri ji reminded people that human life is not meant to be spent like the other animals in just eating, sleeping, worrying and mating. Human life has a higher purpose and therefore God has gifted it with intellect. Humans must harness this tool to differentiate real from unreal and permanent from impermanent. All the relations and possessions of this world would but vanish with this physical body but life would continue in subtle form. The reason of all the misery is that we seek happiness in these limited and fleeting objects of the world. The real happiness lies in the source wherefrom life originates. Therefore, it is our prime duty to recognize the source and secure a seat there. Normally, lured by worldly attractions, our mind and prana (energy) run outwards through the nine doors or orifices (eyes, nostrils, ears, mouth, anus and penis) but there is a subtle tenth door inside the body at the seat of pineal gland or third eye, which connects us with the source. All we have to do is to bring our mind and prana home (inside the body) and guide them towards the tenth door. Obviously, it is not possible to perceive and possess this subtle path so easily and therefore we need an able guide or Guru. Nevertheless, just because the path is difficult, we cannot go astray. We must do the right thing and—most importantly—on right time. Who knows how many lives have already been passed, therefore, let’s not delay and grab this opportunity. By God’s grace, we have received this inspiration and information; therefore, we must use it. Remember, spirituality begins at home. We need not renounce everything and go to jungles rather facing the goal start from our very place.